Obviously travelling at warp speed isn't a natural state of existence for most terrestrial organisms, but we never knew just how harmful the effects of maximum warp velocities could be on human beings – until now.

A new study published – yes, published – in an 'American' science journal (and accepted by three others) details how an experimental attempt to cross the transwarp barrier and achieve Warp 10 can have devastating and unforeseen consequences on human physiology. Wait… what?

Okay, if you've gotten the sense that something might be amiss with this purported science experiment, congratulations: you're already doing better than the editors of the American Research Journal of Biosciences.

They just published this hokum without realising the 'research' is actually a thinly disguised storyline of Star Trek: Voyager, Episode 31, "Threshold". 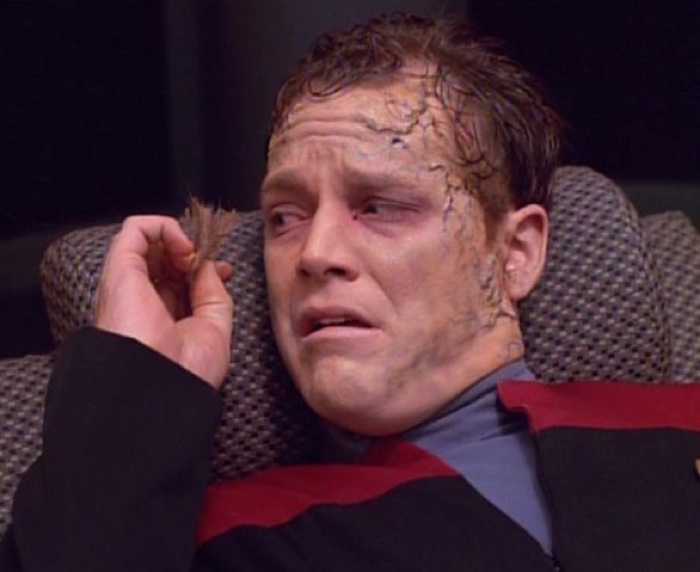 For those not down with their Trekkie lore, the episode sees Starfleet Lieutenant Tom Paris achieve the theoretically unreachable maximum warp velocity of Warp 10 in an experimentally rigged shuttle – but doing so has severe, unexpected consequences (spoilers ahead).

After pulling off the feat, Paris's body starts undergoing rapid physiological changes, as he slowly morphs into some kind of bizarre man-fish, allergic to water and unable to process oxygen.

While his condition is assessed by the Voyager's doctor, Paris abducts Captain Janeway, pops her in the shuttle, and they both speed off at Warp 10.

Later, the crew track down their shipmates, but not before both Paris and Janeway have morphed into bizarre lizard-like amphibians – who have bred a number of offspring, happily paddling around on their swamp planet home. 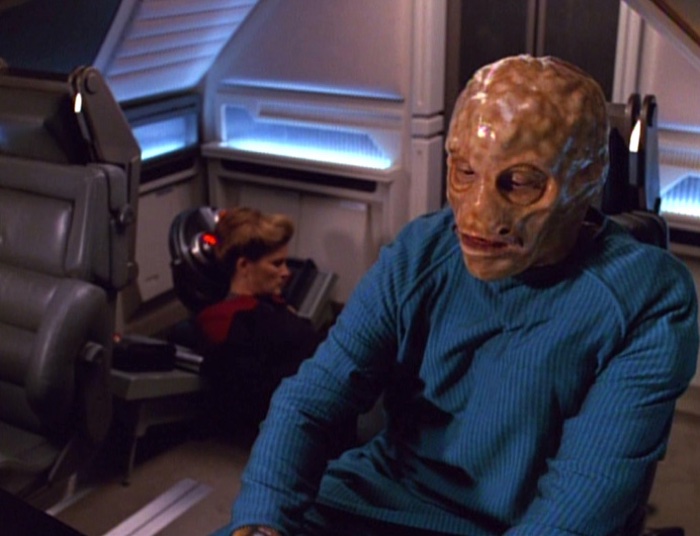 For a fascinating discussion on whether these rather extreme consequences gel with the handling of warp physics in the rest of the Star Trek canon, you may learn more here. (Tl;dr: even crew involved with the production of the show consider this particular episode "a royal, steaming stinker".)

Anyway, unbelievable though it may seem, those happenings described above are actually the substance of a paper called "Rapid Genetic and Developmental Morphological Change Following Extreme Celerity", which is now kind-of a part of published scientific literature.

In the paper, the author, 'Lewis Zimmerman' (a pseudonym, named after a fictional Star Trek doctor character), reports how "extreme celerity [speed], an environmental factor rarely considered, can produce strikingly rapid developmental changes in morphology even in mammalian systems". 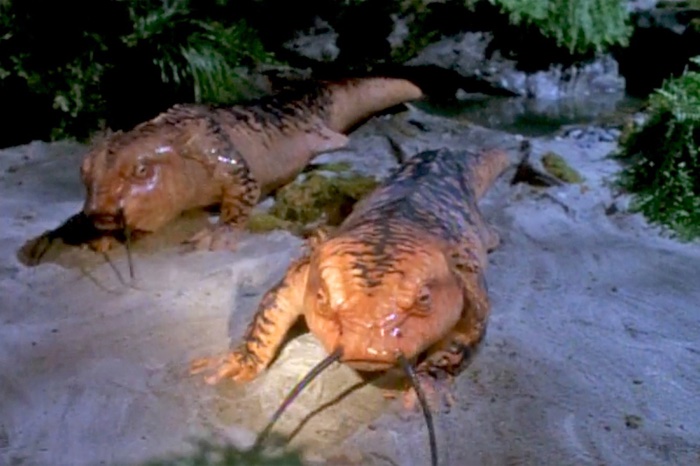 The years have not been kind to Captain Janeway (Star Trek: Voyager/Paramount)

While the language throughout the paper partially camouflages the study's Trekkie origins, it's not exactly a convincing smokescreen for any editors or peer-reviewers actually paying attention.

"We employed a replicated design wherein the two human subjects were exposed to the theoretical maximum celerity (warp 10) and examined," Zimmerman writes.

"Physical responses to the celerity became apparent in later observations… Two subjects were allowed to breed, and a litter of three viable, motile progeny were produced with no obvious external physical deformity relative to the parents."

So how did this prank get published, not to mention accepted by three other scientific journals?

The problem lies with predatory journals: publications that don't offer substantial scientific review of papers, but exist to make money off up-and-coming scientists who are desperate to get noticed in their fields.

Eagle-eyed readers might notice that the culprit in this circumstance – the American Research Journal of Biosciences – has been caught out by one of these pranks before.

Last July it was caught in a similarly sensational sting, publishing an obviously fake paper on the science of Star Wars' 'midichlorians', which, amidst its scientific mumbo jumbo, incorporated block quotes lifted wholesale from Revenge of the Sith:

"Did you ever hear the tragedy of Darth Plagueis the Wise? I thought not. It is not a story the Jedi would tell you. It was a Sith legend. Darth Plagueis was a Dark Lord of the Sith, so powerful and so wise he could use the Force to influence the midichloria to create life."

While it's beyond funny to see predatory journals get caught out in stings like this, their existence is a serious issue in the science community.

"They are essentially counterfeit journals, mimicking the look and feel of legitimate online journals, but with the singular goal of making easy money," research librarian Jeffrey Beall from the University of Colorado, who used to maintain a list of these predatory publications, told Space.com.

So how much money do these nickel-and-dime operators charge for their exploitative exposure?

Well, 'Zimmerman', who in real life is a biologist with 30 years' experience, told Space.com that the American Research Journal of Biosciences initially wanted US$749 to publish his paper (which they did 'review', believe it or not), but in the end they ultimately caved in to his counter-offer.

The findings – if you can call them that – are reported in the American Research Journal of Biosciences.