Bizarre Brain-Like Blobs Discovered Lurking in a Lagoon in Vancouver

It's sticky, slimy, and if you held one in your hands it might feel something like a gelatinous, semi-deflated basketball.

But the biggest surprise about this bizarre brain-like blob found recently in an artificial lagoon in Canada is that the gooey mass isn't actually an it at all, but a they.

Yep, this pile of slimy green stuff is in fact a colony of thousands of organisms bound together into a cooperative collective that rests or floats in freshwater reservoirs, filtering plankton and other nutrient sources out of the water.

Called Pectinatella magnifica, the blob starts off as a single invertebrate organism, which asexually produces clones of itself until it's surrounded by an extended family of aquatic doppelgängers, all bound together by a sticky protein substance. These kind of filter feeders are a member of the aquatic group bryozoans, most of which live in the ocean, but P. magnifica (aka the magnificent bryozoan) is an exception to the rule, living out its gelatinous existence in freshwater bodies.

Which is how this remarkable and rarely seen life-form came to be unexpectedly discovered during a recent Bioblitz biology expedition in Stanley Park's Lost Lagoon in Vancouver.

"It's kind of like three-day-old Jello – a bit firm but gelatinous," Kathleen Stormont of the Stanley Park Ecology Society (SPES) explained to the Vancouver Courier.

"They have a very ancient lineage that hasn't changed for hundreds of thousands of years."

While their slimy, moist appearance might look gross to human eyes, if you happen to bump into a bulbous bryozoan while taking a dip it's probably not all bad, because it means you're swimming in the organisms' filtered, cleansed water habitat.

Previous bryozoan sightings have been made across North America, but they've never been seen in Stanley Park before.

Still, the local researchers say it's not exactly a surprise to find them lurking in the Lost Lagoon's biofiltration pond – which was established to filter pollutants before they enter the rest of the artificial lake environment.

"What the bryozoans like is that there is little to no current and high nutrient levels," SPES public education and outreach manager Celina Starnes told the Vancouver Courier.

It's thought species like P. magnifica may have originated in the Mississippi River, before migrating to other water bodies – with larval spores being transported from one pond to another by flying ducks or the breeze.

The blob's natural camouflage means they're not exactly easy to spot, and it could be they were only found on this occasion due to lower-than-usual water levels in the lagoon. 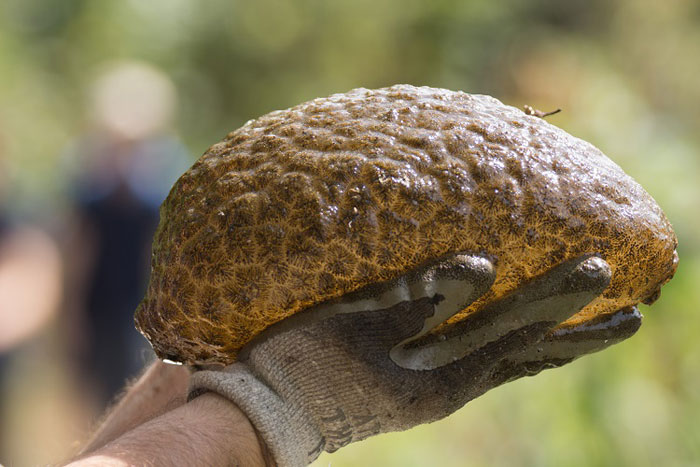 While these slimy blob monsters might freak some of us out, they're really only a threat to things like plankton and algae – and that moist, brain-like appearance is actually just a survival mechanism.

"They're a colony of tiny organisms that like to hang out together," Stormont said. "If you have a predator there's safety in numbers."