Bonobos Volunteer to Help Strangers, Making Them More Human Than We Thought

As a human living in a society, you've probably had unsolicited help offered to you at least once - even an act as simple as holding a door. Now it turns out that behaviour is not unique to humans.

Researchers have found that bonobos are willing to help out their fellows - even if those fellows are strange bonobos they've never met before.

And another 2013 study found that bonobos will willingly share their food - even going so far as giving their own food to a stranger in exchange for a social interaction.

It's the team behind the latter study, Jingzhi Tan and Brian Hare of Duke University, that have conducted this new research into bonobo altruism.

Their earlier study found that bonobos would not give food in their possession if there was no opportunity for social interaction in exchange. When the food is not in their possession, though, they will help other bonobos get it, even without the social exchange.

The team studied wild bonobos at the Lola ya Bonobo sanctuary in the Democratic Republic of Congo.

The first part of the study involved an experiment in which a bonobo could help a second, unfamiliar bonobo obtain out-of-reach food. A piece of apple was tied in an enclosure by a rope held in place with a wooden pin. By removing the wooden pin, the helper bonobo could drop the apple to the stranger, who would not be able to reach it otherwise.

However, it was not without cost to the helper bonobo. Their starting position was across the room, where they could play with toys. In order to help the stranger, they had to cross the room and climb the cage to release the apple.

The bonobos released the apple four times more often when there was a waiting bonobo in the cage below the apple than when it was empty. 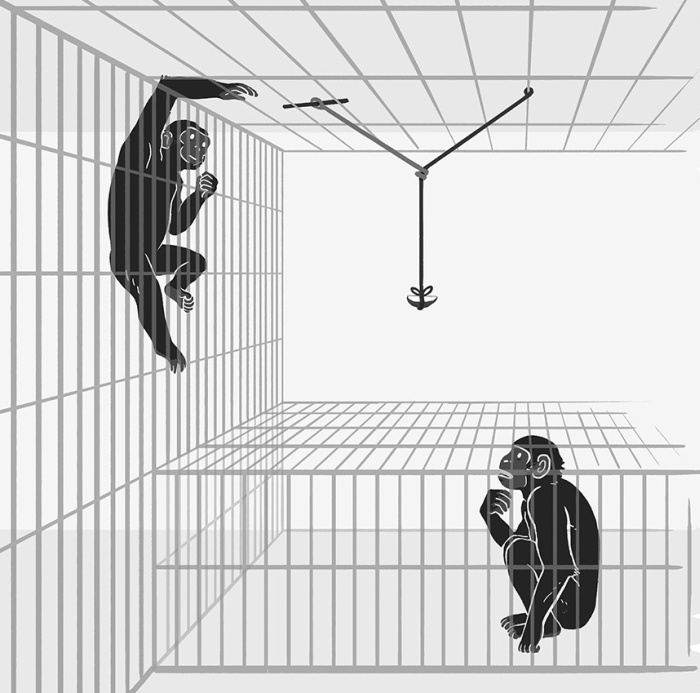 One variation included an opening in the mesh surrounding the cage so that the waiting bonobo could stick their arm through to gesture for help.

For the second part of the experiment, the researchers tested yawn contagion in bonobos - that is, when watching someone yawn triggers a yawn in the observer, a phenomenon that is thought to be closely linked to empathy.

They showed the apes short videos of other bonobos yawning or making a neutral expression, both familiar to the individual and strangers. The researchers found that the observing bonobos yawned in response to videos strangers yawning as they did to videos of their friends.

"Although not the primary test of our predictions, it is interesting to note that stranger yawns were at least as contagious as those of groupmates," the researchers wrote in the paper.

"Because the contagiousness of bonobo yawns is an indicator of social rapport, this result suggests that the strength of prosociality toward strangers and that toward groupmates is similar."

Xenophilia, or affection for strangers, could evolve when the benefits of bonding outweigh the potential costs, such as having less food, Tan noted in a 2013 dissertation.

Forming strong social bonds and cooperation benefit bonobos more than competition, compared to chimpanzees, which are more aggressive and xenophobic.

And the first step in this process is making a good first impression.

"All relationships start between two strangers," Tan said. "You meet a stranger, but you may meet them again, and this individual could become your future friend or ally. You want to be nice to someone who's going to be important for you."