It's Official: Botanists Have Found The Ugliest Orchid in The World

Beauty may be in the eye of the beholder, but a newly discovered orchid isn't likely to be the top choice for many as a corsage centrepiece.

Gastrodia agnicellus, from the forests of Madagascar, has been given the label of the world's ugliest orchid by botanists at the Royal Botanic Gardens, Kew in the UK.

And yet the plant is a fascinating one, unusual among orchids, and indicative of just how much we may miss of what's hiding in the forest undergrowth.

In turn, this highlights how important it is to protect the environment: although it's only just been discovered, G. agnicellus is already considered a threatened species.

It seems reasonable that the plant hadn't been recognised until September of last year. G. agnicellus spends most of its life buried underground, emerging in August and September only to flower and fruit beneath the leaf humus on the forest floor before disappearing underground again.

Those flowers, too, are small - just 11 millimetres in length (0.43 inches) - and nondescript against the detritus on the ground, ranging from brown to white in colour. Even so, the flower had been found before; it's just no one realised the significance until recently. 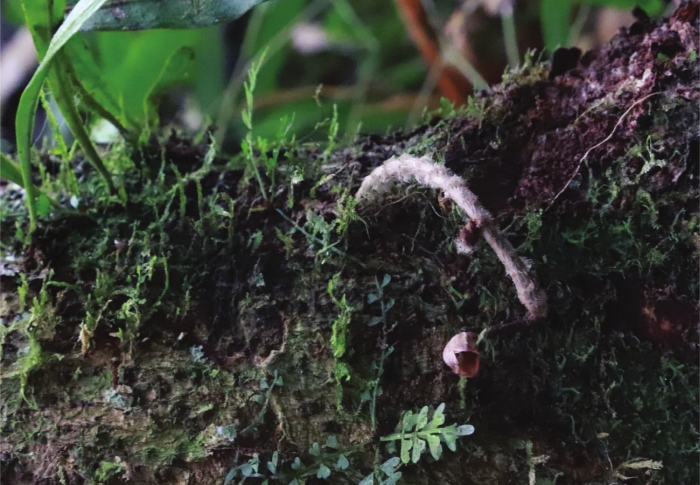 "Material of the new Gastrodia agnicellus, found near Ifanadiana in SE Madagascar in the 1990s, was recognised to belong in the genus and was initially considered to be G. madagascariensis," wrote botanist Johan Hermans of Kew Gardens in the official description of the species.

"During a field trip to Madagascar in December 2017, a Gastrodia with tall, dry infructescences was first noticed in the Ranomafana area. During a more recent trip, in September 2019, the same site was re-visited and after extensive searching a few new developing fruiting inflorescences were found.

"It was not until a layer of leaf litter was lifted that a small number of flowers were also discovered. It soon became clear that the flowers were quite different from those of the newly validated G. madagascariensis and that it was an unrecognised species."

The orchids were found in deep shade in a humid evergreen forest, at the bases of trees, hidden among flowers, moss and leaf litter. Yet they emitted a pleasant, musky, rose-like scent, Hermans wrote, that grew stronger in warmer temperatures.

After the flowers are pollinated, the stem grows longer, likely to aid the scattering of the seeds. 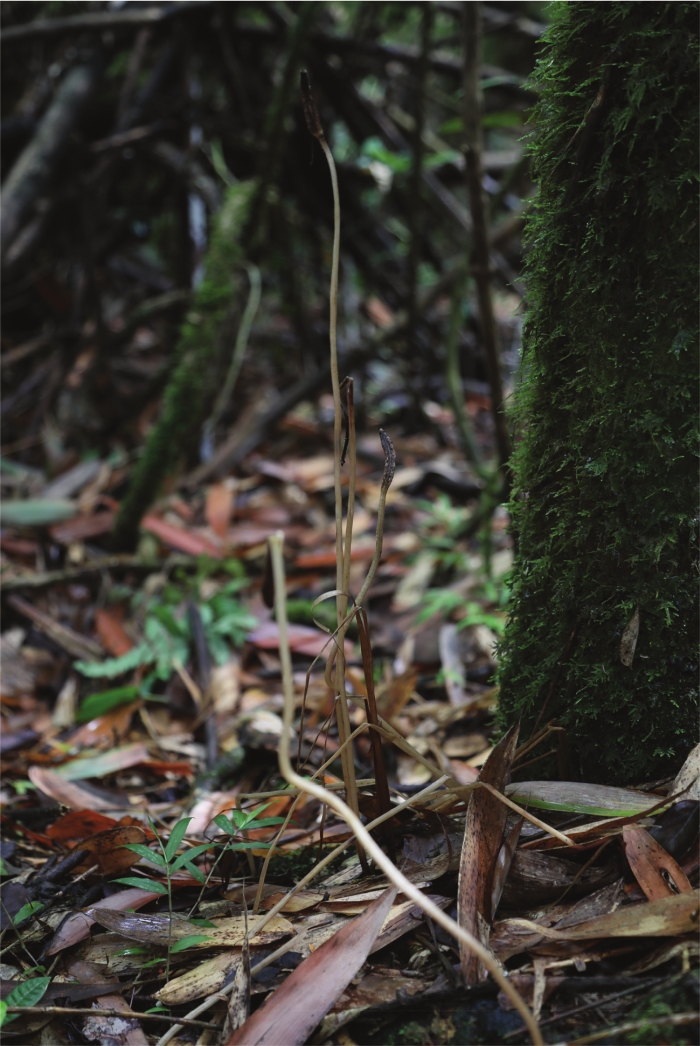 And, as with other members of the Gastrodia genus, the orchid plant has no leaves - in fact, it has no photosynthetic tissue at all.

That's because this plant is a holomycotroph - a type of orchid that relies solely on a relationship with fungus for the nutrients it needs to survive. The fungus extracts nutrients such as carbon from the soil or other plants, and the orchid slurps up what it needs from the fungus.

All orchids rely on a relationship like this with fungus at some point in their life cycle, but as most species grow into adulthood, their reliance on fungus fades. It's not exactly clear what the fungus derives from the relationship, but in many cases, it's part of a mycorrhizal network, where the fungus exchanges nutrients with other plants.

For G. agnicellus, its precise relationship with fungus is one of several unknowns, but it will be an important one to figure out. Its habitat under specific trees suggests that the mycorrhizal system it relies on is quite specific. This is consistent with other species in the genus, but it also means that threats to its habitat, such as encroaching human agriculture and wildfire, could be a serious problem.

It's also unclear how the plant is pollinated. Ants were observed crawling in and out of the flowers - likely, Hermans noted, to steal nectar - so that's one possible pollination pathway. But more study will need to be done to determine how G. agnicellus relies on, and contributes to, the complex ecosystem it inhabits.

There is some good news, though. Although the plant's range seems small, it has been found in the Ranomafana National Park protected area. Which means, according to Kew Gardens, that it has some measure of protection, for now, against anthropogenic habitat loss.

G. agnicellus has been selected as one of Kew Gardens' top 10 new species of 2020, and described in Curtis's Botanical Magazine.