We don't know their names, but two people who lived and died in Bronze Age Greece 3,500 years ago were obviously hugely important to the people around them. Archaeologists have just found their tombs, so opulent they were once lined with gold leaf, and filled with exquisite grave goods.

It is, the researchers say, a deeply important discovery for our understanding of early Greek culture.

The two tombs were found in a place called Pylos, overlooking the Mediterranean Sea, close to another important grave - that of the Griffin Warrior, discovered in 2015, and brimming with over 3,000 pieces of treasure, including jewellery, beads, weapons and carvings.

The newly found tombs - beehive-shaped structures called tholi that were hidden underground - are likewise sumptuous, even in spite of past looting, according to archaeologists Jack Davis and Sharon Stocker of the University of Cincinnati.

The team found thousands of fragments of gold leaf, as well as beads, jewellery and a carved sealstone.

"Like with the Griffin Warrior grave, by the end of the first week we knew we had something that was really important," Stocker said of the discovery.

"It soon became clear to us that lightning had struck again."

The tombs - named Tholos VI and Tholos VII, and measuring 12 metres (39 feet) and 8.5 metres (28 feet) respectively - were not easy to find. Both domes had collapsed long ago, and the rubble covered over by vegetation. You can see them pictured above, in the middle and on the right; the tomb on the far left, Tholus IV, was discovered in 1939.

Excavating the graves and documenting the items therein was quite the chore; the process took over 18 months. But if not for the collapsed domes, the tombs may not have retained their secrets. Although they had both been looted long ago, their collapse and concealment kept them from further robbery.

The treasures that remained - dating to the Mycenaean period between 1600 and 1100 BCE - are breathtaking. There were treasures that had to have been imported - red carnelian, Baltic amber and Egyptian amethyst.

And there was so much gold. One gold ring is a unique find, showing two bulls and ears of what has been identified as barley, an important grain crop in use for millennia for, among other things, animal feed. 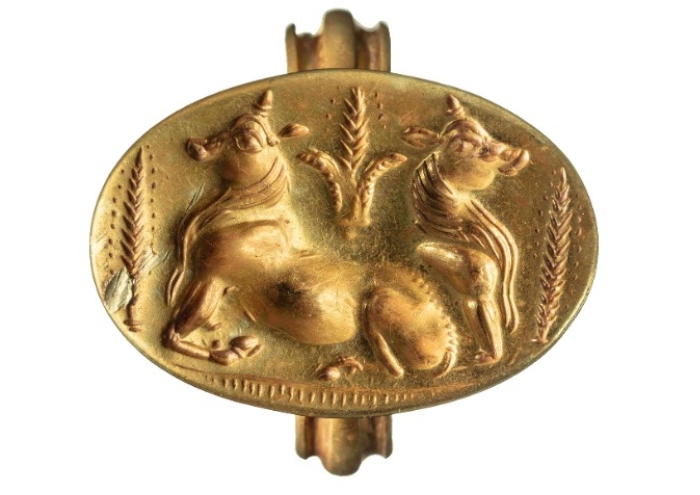 "It's an interesting scene of animal husbandry - cattle mixed with grain production. It's the foundation of agriculture," Davis said. "As far as we know, it's the only representation of grain in the art of Crete or Minoan civilisation."

A gold pendant found in the tombs features the Egyptian sky goddess Hathor, as a divine mother, and a guide to souls as they make their transition into the afterlife.

And another unusual object is a sealstone carved from agate, pictured below. It depicts two mythological creatures called Minoan Genii, with lion-like heads. As with many depictions of these creatures, they are standing on their hind feet, bearing offering vessels - a libation jug and an incense burner. 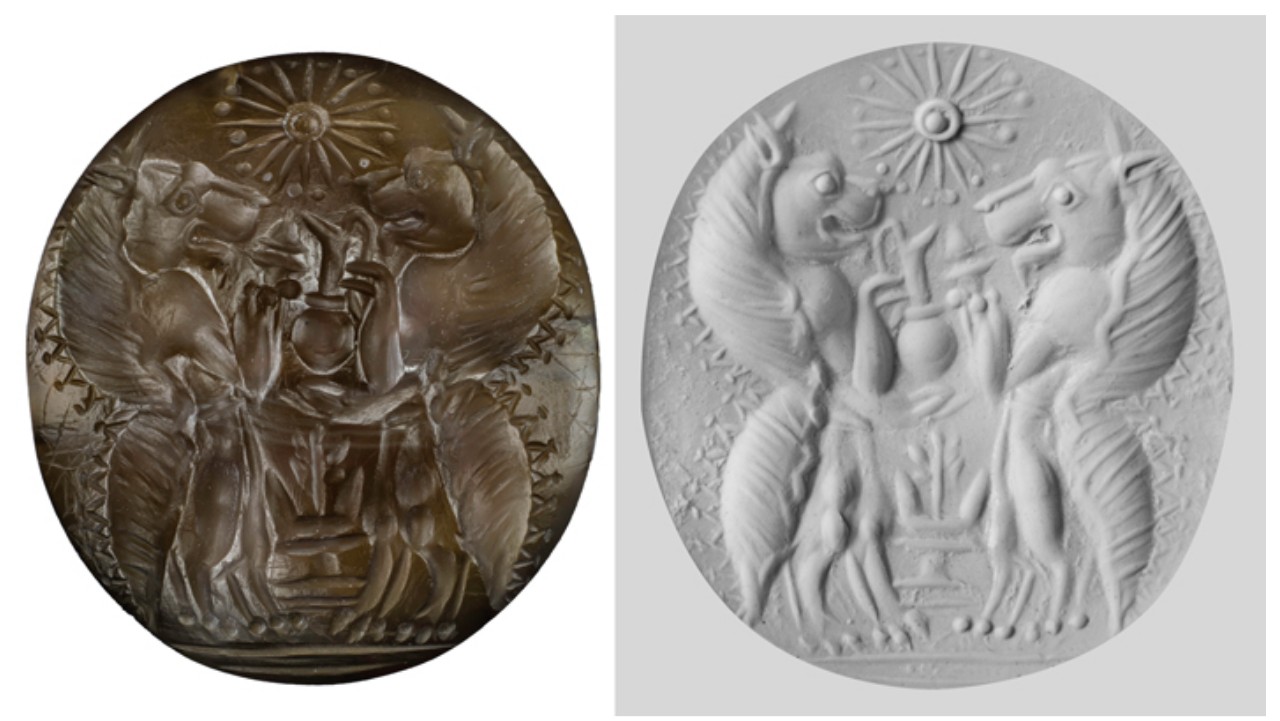 The seal, and a putty impression of it (r). (UC Classics)

What is more unusual is a 16-pointed star - a symbol quite common in Greece from the 6th century BCE onward, but much less common as far back as the artefacts in the graves. It made an appearance on a second, unspecified bronze-and-gold artefact in the tombs too, the archaeologists said.

"It's rare," Stocker said. "There aren't many 16-pointed stars in Mycenaean iconography. The fact that we have two objects with 16 points in two different media (agate and gold) is noteworthy."

The richness of the graves suggests that the people buried therein had wealth and status; and that Pylos, hard to reach by land because of mountainous terrain, was likely an important and thriving port on the Bronze Age trade route.

"I think these are probably people who were very sophisticated for their time. They have come out of a place in history where there were few luxury items and imported goods. And all of a sudden at the time of the first tholos tombs, luxury items appear in Greece," Stocker said.

"You have this explosion of wealth. People are vying for power. It's the formative years that will give rise to the Classic Age of Greece."