Britain Now Generates Twice as Much Electricity From Wind as Coal, And That's a Big Deal

Just six years ago, more than 40 percent of Britain's electricity was generated by burning coal. Today, that figure is just 7 percent.

Yet if the story of 2016 was the dramatic demise of coal and its replacement by natural gas, then 2017 was most definitely about the growth of wind power.

Wind provided 15 percent of electricity in Britain last year (Northern Ireland shares an electricity system with the Republic and is calculated separately), up from 10 percent in 2016.

This increase, a result of both more wind farms coming online and a windier year, helped further reduce coal use and also put a stop to the rise in natural gas generation. 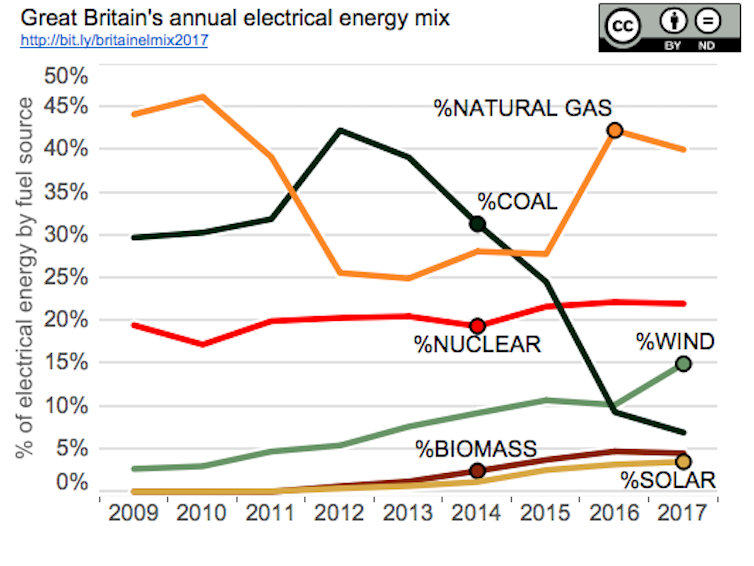 In October 2017, the combination of wind, solar and hydro generated a quarter of Britain's electricity over the entire month, a new record helped by ex-hurricane Ophelia and storm Brian. 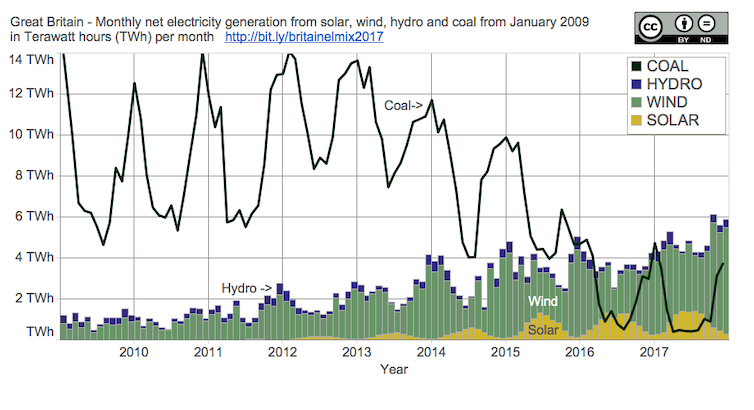 Since that record month, large new offshore wind farms have started to come online. Dudgeon began generating off the Norfolk coast, as did Rampion, which can be seen from Brighton town centre.

In all, Britain's wind output increased by 14 terawatt hours between 2016 and 2017 – enough to power 4.5 million homes. To give a sense of scale, this increase alone is more than the expected annual output from one of the two new nuclear reactors being built at Hinkley Point C.

Not only is offshore wind growing fast, it is also getting much cheaper. When the latest round of government auctions for low-carbon electricity were awarded last year, two of the winning bids from offshore wind developers had a "strike price" of £57.50 per megawatt hour (MWh).

This is considerably cheaper than the equivalent contract for Hinkley Point of £92.50/MWh (in 2012 prices).

Although these wind farms won't be built for another five years, this puts competitive pressure on other forms of low-carbon electricity.

If there is to be a nuclear renaissance, or if fossil fuels with carbon capture and storage are to become a reality, these industries will have to adjust to the new economic reality of renewable energy.

Overall demand for electricity also continued its 12-year downward trend. More of the electricity "embedded" in the products and services used in the UK is now imported rather than produced at home, and energy efficiency measures mean the country can do more with less.

This meant Britain in 2017 used about as much electricity as it did way back in 1987 – despite the considerable population growth.

At some point this trend will reverse though, as electric vehicles and heat pumps become more common and electricity partly replaces liquid fuels for transport and natural gas for heating respectively.

One major challenge this brings is how to accommodate greater seasonal and daily variation in the electricity system, without resorting to the benefits of fossil fuels, which can be pretty cheaply stored until required.

Electricity generated in Britain is now the cleanest it's ever been. Coal and natural gas together produced less than half of the total generated.

Britain's electricity was completely "coal free" for 613 hours last year, up from 200 hours in 2016. This position would be wholly unthinkable in many countries including Germany, India, China and the US, which still rely heavily on coal generation throughout the year. 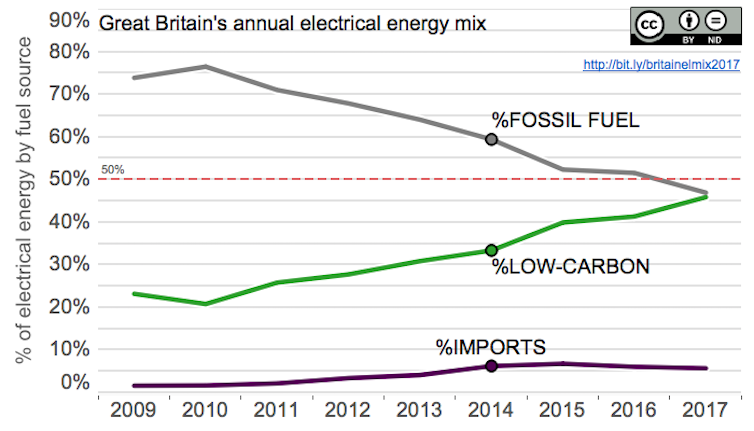 However, the low level of coal generation over 2017 masks its continued importance in providing capacity during hours of peak demand. During the top 10 percent hours of highest electrical demand, coal provided a sixth of Britain's electricity.

When it matters most, coal is relied on more than nuclear, and more than the combined output from wind + solar + hydro. Additional energy storage could help wind and solar meet more of this peak demand with greater certainty.

Looking forward to 2018, we would be surprised if wind generation dropped much from its current levels. Last year wasn't even particularly windy compared to the longer-term average, and more capacity will be coming online.

Equally, it would be surprising if solar and hydro combined produced significantly less than they did last year.

It is therefore inevitable that another significant milestone will be reached this year. At some point, for several hours, wind, solar and hydro will together, for the first time, provide more than half of Britain's electricity generation.

This goes to show just how much a major power system can be reworked within a decade.

The data used in this article is based on the Energy Charts and Electric Insights websites, which allow readers to visualise and explore data on generation and consumption from Elexon and National Grid.

Data from other analyses (such as BEIS or DUKES) will differ due to their methodology, particularly by including combined heat and power, and other on-site generation which is not monitored by National Grid and Elexon.

Our estimated carbon emissions are based on Iain Staffell's research published in Energy Policy, and account for foreign emissions due to electricity imports and biomass fuel processing.