Stars have planets, and planets have satellites we call moons; but can a moon have its own satellite? And if it did, what would we call it?

In a paper currently up on pre-print resource arXiv, astronomers Juna Kollmeier of the Carnegie Institution for Science and Sean Raymond of the Laboratoire d'Astrophysique de Bordeaux have called them submoons.

But other scientists are using the far more delightful term moonmoon, so that's what we're going to go for.

In the paper, Kollmeier and Raymond describe how they ran simulations to determine whether a moonmoon could exist, after Kollmeier's son stumped her with the question in 2014, Gizmodo reports.

There are no known moonmoons in our Solar System, perhaps because the line they need to tread in order to exist is a very fine one. The moonmoon needs to be close enough to the moon to be bound by its gravity, rather than the planet's; but not so close that it gets torn apart by tidal forces.

That also means there needs to be enough distance between the moon and planet for the moonmoon not to be snared by the planet's gravity.

But there's still one really key ingredient. How would the moonmoon get into place?

"Something has to kick a rock into orbit at the right speed that it would go into orbit around a moon, and not the planet or the star," Raymond told New Scientist.

And then that delicate gravitational balance would have to be maintained. The moon, for example, would not be able to slowly move away from the planet, as the Moon is moving away from Earth.

So any moonmoons, if they did manage to somehow get into position, would be likely be relatively short-lived. 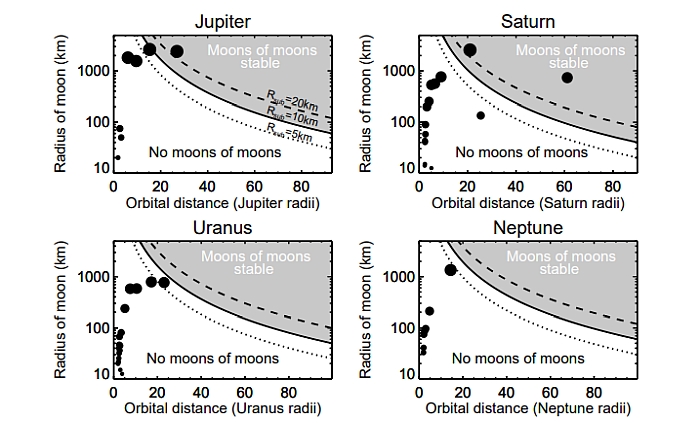 As planetary astronomer Michele Bannister of Queens University Belfast told New Scientist, "I think we can say for sure that there's not a moonmoon that's kilometres across around Jupiter or Saturn. A moonmoon down to the size of a skyscraper could exist out there, but I'd call it moonmoonlet."

And, given the difficulty in detecting even a moon outside the Solar System, our chances of spotting an exomoonmoon are, for the time being, pretty much zero.

But that's okay. The paper lays good groundwork for future research into the possibility of moonmoons, and also helps us understand the formation histories of planets and their satellites.

"While many planet-moon systems are not dynamically able to host long-lived submoons, the absence of submoons around known moons and exomoons where submoons can survive provides important clues to the formation mechanisms and histories of these systems," the researchers wrote in their paper.

"Further studies of the potential formation mechanisms, long-term dynamical survival, and detectability of submoons is encouraged."

The paper is yet to be peer-reviewed, but you can read it on arXiv.org.