In the world of maths problems, some questions are easy for 11-year-olds to answer, some are difficult, and some are… kind of impossible. This story is about the latter category.

Fifth-grade primary school students at Nanchong Shunqing Primary School in south-west China were diligently making their way through a recent exam paper when they were faced with a rather unusual-looking math problem, cunningly disguised as question 6.

"If a ship has 26 sheep and 10 goats on board, how old is the ship's captain?" the students were asked.

And there you have it. It's a question that has no solution, or maybe any will do. Not really maths, more like a riddle, served with a side of metaphysics. 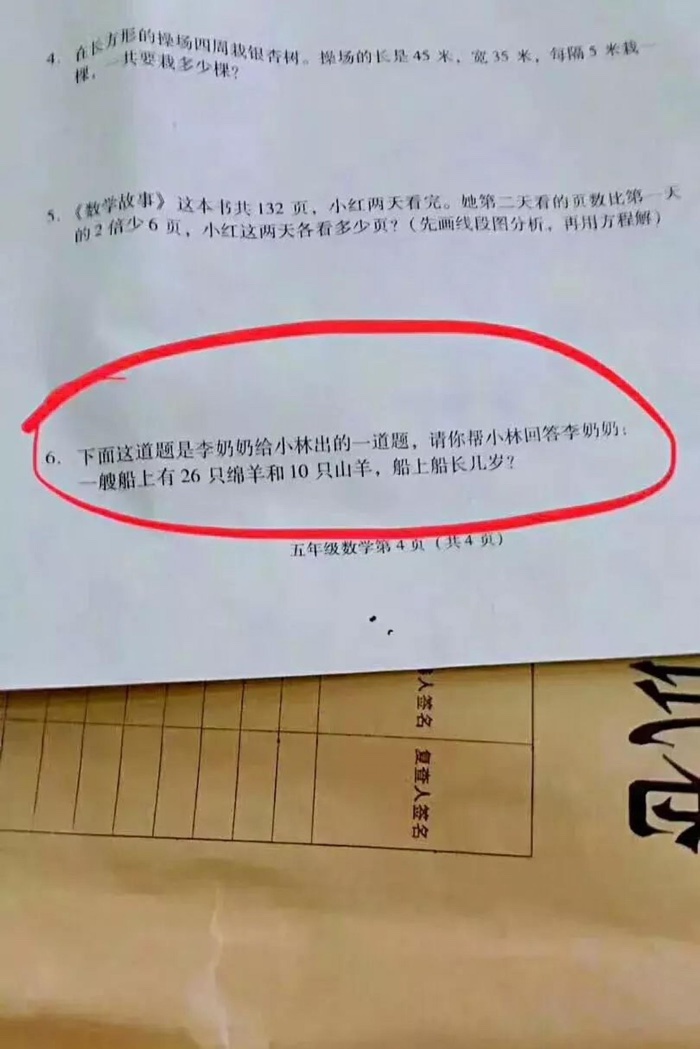 Whatever it was, the 11-year-olds tried their best to answer this thing.

"The captain should be at least 18 years old because a minor is not allowed by law to operate a vessel," one suggested.

"The captain is 36 years old," a third student guessed. "He is quite narcissistic, so the number of animals corresponds to his age."

Some simply gave up, acknowledging the inevitable futility of answering that which is unanswerable.

These clever, creative, and crestfallen responses went viral when some of the students' answers were uploaded to Chinese social media, and not everybody was happy about the exam paper's unorthodox style.

"The question has nothing to do with mathematics," one commenter said. "It doesn't test the pupils' ability to understand maths."

"This question makes no logical sense at all," wrote another. "Does the teacher even know the answer?"

Some dressed up their criticisms by making fun of the problem itself.

"If a school has 26 teachers, 10 of which weren't thinking, how old is the principal?" (This, admittedly, is quite brilliant.)

In response to their detractors, the Shunqing District Department of Education released a statement last week, defending the question, and explaining the exam was designed to test students critical awareness, capacity to ask questions, and their ability to think independently of mathematical problems.

"Some surveys show that primary school students in our country lack a sense of critical awareness in regard to mathematics," the educators wrote, adding it was their vocational duty to basically vex students from time to time.

"The role of education is not to produce standardised spare parts… Each answer can reflect a different personality. A question that can have different answers is a good question."

Back on Weibo, the commenters were busy proving the point, exercising their own boundless creativity with each droll – yet eminently viable – solution.

"The total weight of 26 sheep and 10 goat is 7,700 kilograms, based on the average weight of each animal," one proposed.

"In China, if you're driving a ship that has more than 5,000 kilograms of cargo you need to have possessed a boat licence for five years. The minimum age for getting a boat's licence is 23, so he's at least 28."