For the first half of the 20th century, the humble chemistry kit was a hit with science-savvy children across the western hemisphere.

Unfortunately science isn't always child's play, and finding the line between safe entertainment and a trip to the emergency department hasn't always been a clear one, especially where chemistry is concerned.

Today you can still find a few well-meaning lab sets, but they don't contain anything much stronger than packets of bicarb and a few simple salts.

Meanwhile, here are five things kids could once do with their science toys.

The rise in popularity in the mass-produced chemistry kit can be dated back to the early 1920s, when a manufacturer of magic kits – Alfred Carlton 'A.C.' Gilbert – went into a new line of business.

Spectacles of science and magic go hand in hand, so what better trick than making precious bits of gold vanish before your very eyes.

All that was needed was a generous dose of sodium cyanide in a glass of water. Not only does it help gold dissolve, cyanide is a rapid-acting poison: just a couple hundred milligrams of the substance is enough to kill. 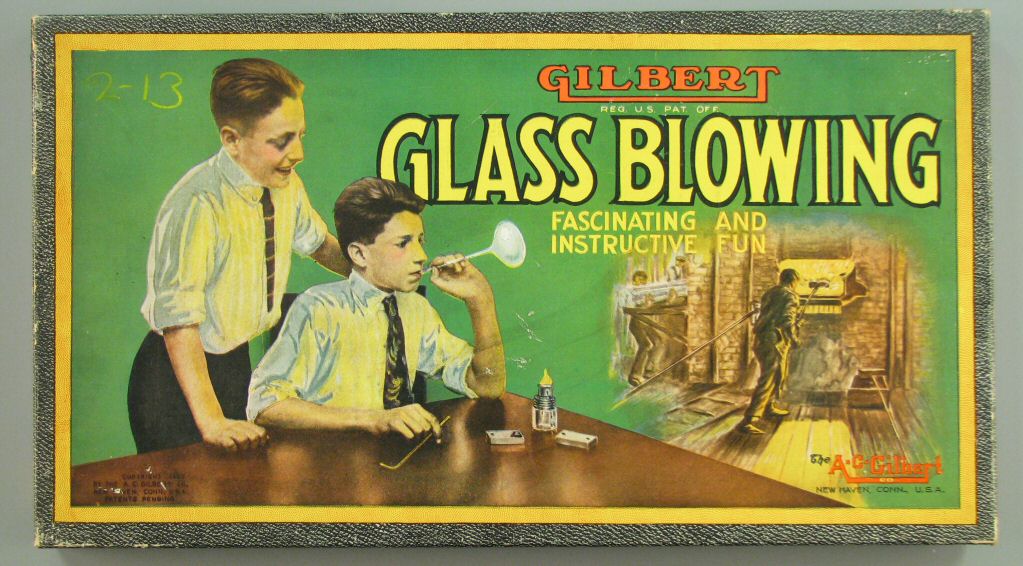 There's more to being a chemist than just avoiding poisons – you have to sometimes risk third degree burns by shaping glassware to suit your chemical-mixing needs.

Gilbert not only sold chemistry kits to kids (namely boys), he delivered sets with blowtorches, glass rods, and instructions for making laboratory hardware such as test tubes and flasks.

Nobody could argue that such artisan skills wouldn't have been useful in a future chemist.

But making laboratory glass malleable enough to shape it requires temperatures of at least several hundred degrees – more than hot enough to give third degree burns in less time than junior can say "look ma', I made a swan!".

3) Measure the radioactivity of an ore, and risk cancer 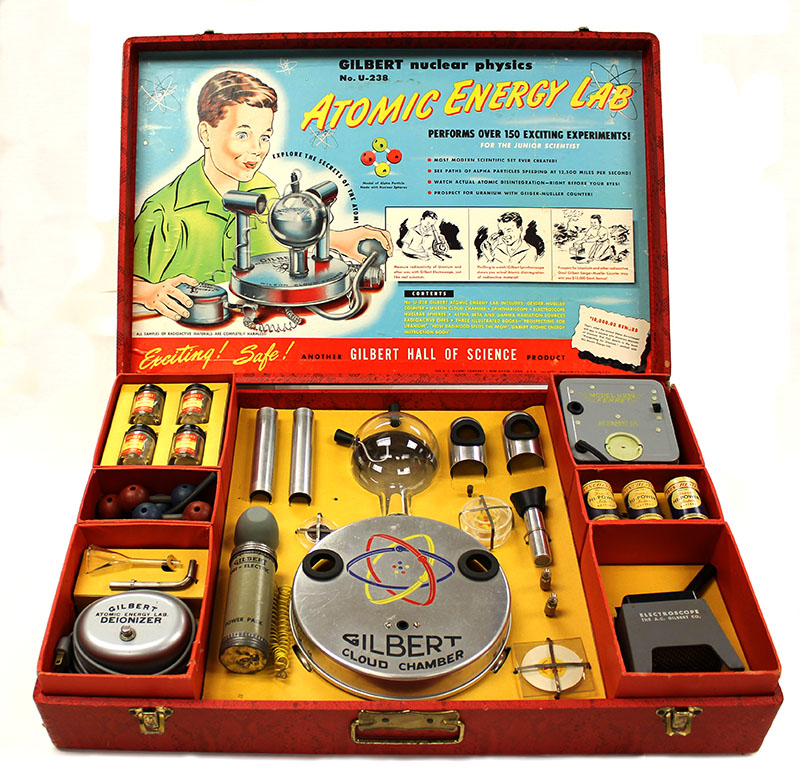 The Gilbert U-238 Atomic Energy Lab was sold briefly between 1951 and 1952, and was expensive enough to keep it out of the hands of all but the most well-behaved (and affluent) on Santa's 'good' list.

For your money you got:

The ores came in glass jars – with a strict warning to not be removed – and were unlikely to be a health concern as they were. Not unless they were removed, broken up, and accidentally ingested. Which no kid would ever do.

4) Catch a criminal by dusting for prints, and again risk cancer

Maybe we should give poor Gilbert a break. Things are better today, surely.

Mostly, yes. But there was that one incident in 2007 when the nonprofit US organisation Environmental Working Group claimed to find asbestos in the CSI: Forensic Lab toy kit.

In effect, any kids playing catch-the-criminal by dusting for fingerprints was risking mesothelioma in the far future by inhaling the particles.

The China-based producer of the toy denied the product carried any such risk. Lawsuits blossomed, settlements followed, and today kids will have to find other ways to play little Sherlocks as they find out who stole the cookies from the cookie jar.

5) Pretend to be a chemist with little funding, and supply your own damn chemicals

In 2011, a chemistry set that came without chemicals caused quite a stir. It contained a bunch of equipment and 60 safe, do-it-yourself home science activities that required kids to raid the pantry in search of compounds to mix.

It was taken as a bleak sign of the times, an indication of safety gone mad - but how did we get from a risk of cyanide poisoning to chemistry sets without chemicals?

After peaking in the 1950s, a series of increasingly restrictive government regulations came into play in the US, limiting the kinds of chemicals such sets could contain.

In 1968, the US Department of Health, Education and Welfare estimated that toys – not including outdoor and sports equipment – caused as many as 700,000 injuries a year.

The US Toy Safety Act of 1969 saw an end to many toxic materials, such as lead, as well as other risky elements that could shock, burn, or irradiate children.

A shift in public trust towards governments, businesses, and other authorities, including science, has since seen the public treat chemistry with increasing amounts of fear.

"At the same time, there are many more resources available to children to understand chemical reactions," he told ScienceAlert.

"Students can learn via constructing models of chemicals, both digitally and physically; online videos offer experiences not possible years ago and educators are more aware of everyday learning of physics, chemistry and the environment via ideas like 'food science' and apps that allow you to track birds in your local area."

Digital tools might not be the same as getting our hands dirty, but if dirty hands means a few kids suffer ill effects, it might be worthwhile.

Nonetheless, we also have better ways to get kids in touch with professionals who know how to manage potential dangers.

"If you have students who are quite independent and want to go beyond the curriculum, it would be a good idea to get help from external professionals rather than let students tinker on their own, potentially unsupervised," says Aranda.

"I would check with local groups and even with universities for help."

For some safe science gifts, Aranda and his colleague Wendy Jobling have given some great advice in this article in The Conversation.

Trending News
We've Never Found Anything Like The Solar System. Is It a Freak in Space? Space1 day ago
What Happens in The Brain When We Vomit? We May Have Just Found Out Health2 days ago
Experiments Show Women Can Sniff Out Single And Married Men Humans3 days ago