To play any game, you need to have a basic grasp of the rules. But the way we learn and process those rules is a fascinating process in itself - one that scientists can use to investigate learning in animals.

Now scientists have demonstrated that chimpanzees (Pan troglodytes) can learn the relationship between the three hand signals we use to play rock-paper-scissors, and become as adept at it as four-year-old people.

The team, led by researchers from Kyoto University in Japan, employed seven chimps of both sexes and various ages, all residents of the university's Primate Research Institute. All were already familiar with computer-controlled tasks.

Even though chimps have more sophisticated hands than we do, they weren't actually taught to make the hand signals we use to play the game, but instead were presented with pictures of these signals on a screen, portrayed with both chimp and human hands.

Each picture showed two of the three hand signals, and the chimps had to indicate the preferred one - paper over rock, scissors over paper, and rock over scissors.

Then the learning process began. Sitting in a cosy experimental booth, the animals would tap on the pictures on the screen and either be rewarded with a piece of apple and a chime sound, or an error buzzer and no food. 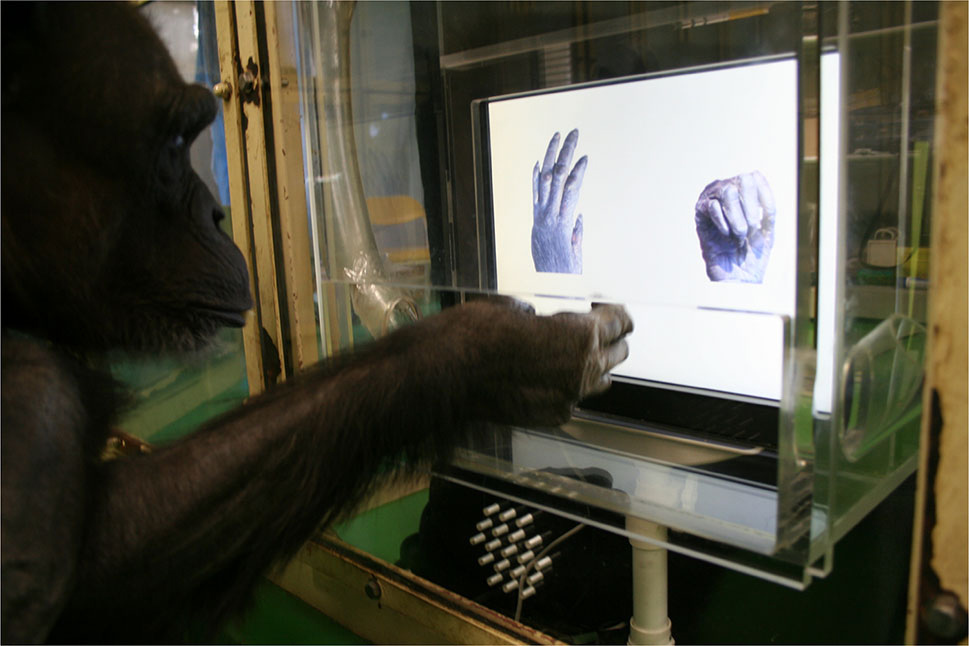 This went on for 48 trials per session, three times a day, and the different signals were progressively mixed in complexity as the chimps learnt the relationships between them.

Eventually five of the seven chimps completed the entire training program with pictures of both chimp hands and - once they'd mastered those - of human hands as well. It took them an average of 307 training sessions.

To see how their learning ability compared to human kids, the researchers then experimented with teaching this same set of game rules to 38 preschool children, ranging in age from about three to six years.

The set-up was similar, except the experiments were conducted at a kindergarten and the kids were not rewarded with a piece of apple when choosing correctly - it was just a chime sound and a picture of happy chimps… and a small reward for showing up.

"After the experiment, the children received cartoon stickers as a reward for their participation, regardless of their performance," the researchers note in the study.

In comparison to the chimps, most of the kids grasped the rules pretty quickly, averaging just five sessions of 12 trials. But their success was strongly correlated with age - anyone under four years old was hopeless, scoring no better than chance at selecting the right hand signals.

"[T]his circular problem is highly difficult for children below the critical age of approximately 4 years," the team concluded, noting that it's also possible older kids might be more familiar with the game already.

Overall, after crunching the data, researchers concluded that once chimps have learned the basics, their mastery of rock-paper-scissors was as good as that of tiny people.

"The chimpanzees' performance during the mixed-pair sessions was similar to that of four-year-old children," says lead researcher Jie Gao.

The team's results build on previous studies that investigate how animals other than ourselves can learn circular relationships, and they hope they have laid ground for further investigations on the subject.

And we like to imagine that somewhere in the outdoor compounds of the institute in Kyoto a bunch of chimps are currently playing rock-paper-scissors to determine who wins the juiciest fruit for lunch.

You can read the full study in Primates.