"We Are in Deep Trouble": Carbon Emissions Break Record in Devastating Global Setback

Global energy experts released grim findings Monday, saying that not only are planet-warming carbon-dioxide emissions still increasing, but the world's growing thirst for energy has led to higher emissions from coal-fired power plants than ever before.

Energy demand around the world grew by 2.3 percent over the past year, marking the most rapid increase in a decade, according to the report from the International Energy Agency. To meet that demand, largely fueled by a booming economy, countries turned to an array of sources, including renewables.

But nothing filled the void quite like fossil fuels, which satisfied nearly 70 percent of the skyrocketing electricity demand, according to the agency, which analyzes energy trends on behalf of 30 member countries, including the United States.

In particular, a fleet of relatively young coal plants located in Asia, with decades to go on their lifetimes, led the way toward a record for emissions from coal fired power plants - exceeding 10 billion tons of carbon dioxide "for the first time," the agency said.

In Asia, "average plants are only 12 years old, decades younger than their average economic lifetime of around 40 years," the agency found.

As a result, greenhouse-gas emissions from the use of energy - by far their largest source - surged in 2018, reaching an record high of 33.1 billion tons.

Emissions showed 1.7 percent growth, well above the average since 2010. The growth in global emissions in 2018 alone was "equivalent to the total emissions from international aviation," the body found. 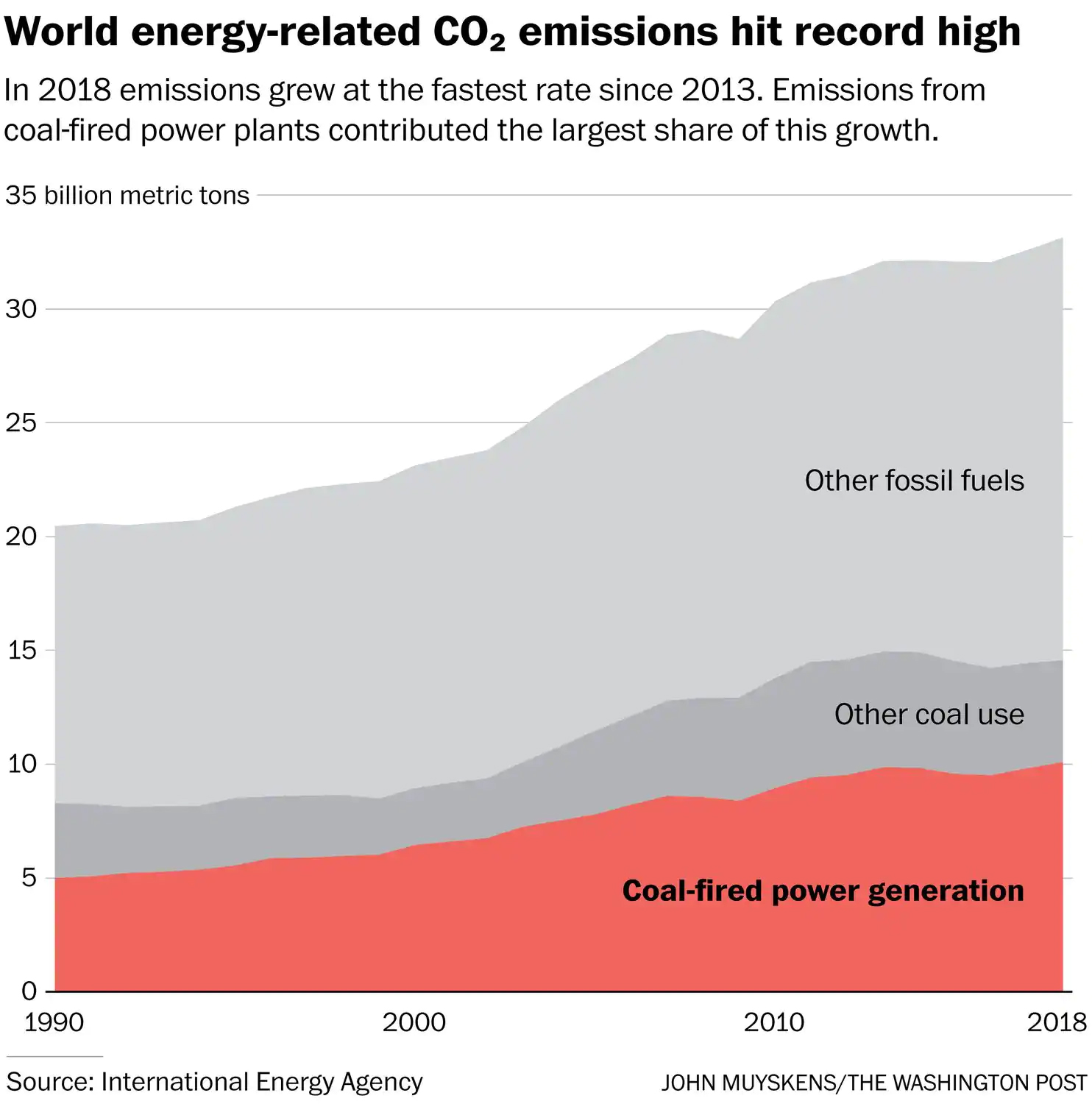 Monday's report underscores an unnerving truth about the world's collective efforts to combat climate change: Even as renewable energy rapidly expands, many countries - including the United States and China - are nevertheless still turning to fossil fuels to satisfy ever-growing energy demand.

"Very worrisome" is how Michael Mehling, deputy director of the Center for Energy and Environmental Policy Research at the Massachusetts Institute of Technology, described Monday's findings.

"To me, all this reflects the fact that climate policies around the globe, despite some limited pockets of progress, remain woefully inadequate," he said in an email.

"They're not even robust enough to offset the increased emissions from economic expansion, especially in the developing world, let alone to spur decarbonization at levels commensurate with the temperature stabilization goals we've committed to under the Paris Agreement."

Mehling questioned whether the Paris climate agreement - the 2015 global accord in which countries vowed to slash their carbon emissions - has the capacity to compel nations to live up to their promises and ramp up climate action over time.

"This will require overcoming the persistent barriers that have prevented greater progress in the past," Mehling said.

Overcoming those barriers is complicated, as the agency report makes clear.

China, for instance, satisfied a demand for more energy last year with some new generation from renewables. But it relied far more on natural gas, coal and oil. In India, about half of all new demand was similarly met by coal-fired power plants.

In the United States, by contrast, coal is declining - but most of the increase in demand for energy in this country was nonetheless fueled by the burning of natural gas, rather than renewable energy.

Natural gas emits less carbon dioxide than coal does when it is burned, but it's still a fossil fuel and still causes significant emissions.

Granted, there's some slight good news in the new report, in that as renewables and natural gas have grown, coal has a smaller share of the energy pie overall.

Yet the fact that it's still growing strongly contradicts what scientists have said about what's needed to curb climate warming.

In a major report last year the UN Intergovernmental Panel on Climate Change found that global emissions would have to be cut nearly in half, by 2030, to preserve a chance of holding the planet's warming to 1.5 degrees Celsius (or 2.7 degrees Fahrenheit).

That would require extremely fast annual reductions in emissions - but instead, the world is still marking record highs.

And when it comes to coal use, that same report found that to limit temperatures to 1.5 degrees C, it would have to decline by as much as 78 percent in just over 10 years. Again, coal emissions are still rising.

Rob Jackson, a professor of Earth system science at Stanford University, said the substantial growth of wind and solar energy detailed in Monday's report was overshadowed by the world's ongoing reliance on fossil fuels.

"The growth in fossils is still greater than all the increases in renewables," Jackson said, adding that few countries are living up to the pledges they made as part of the Paris climate accord.

"What's discouraging is that emissions in the US and Europe are going up, too. Someone has to decrease their emissions significantly for us to have any hope of meeting the Paris commitments."

The new results dash earlier hopes that global emissions might be flattening and starting to decline. From 2014 through 2016, they fell slightly, and coal emissions in particular dipped as well.

But with a renewal of growth in 2017 and record highs in 2018, turning the corner on emissions remains nowhere in sight.

As a result, optimism from earlier this decade has largely faded. International efforts to combat climate change have struggled to maintain momentum and the US government has undergone a reversal of priorities.

"We are in deep trouble," Jackson said of Monday's findings. "The climate consequences are catastrophic. I don't use any word like that very often. But we are headed for disaster, and nobody seems to be able to slow things down."