For the first time in centuries, compasses in Greenwich are about to point directly at true north: an epic coincidence of time and magnetism that hasn't taken place for some 360 years.

This serendipitous occurrence – which is set to occur within the next fortnight – serves as a startling reminder of how Earth's magnetic north pole is constantly wandering, unlike the fixed 'true north' of Earth's geographic north pole.

The angular difference between those two different points is called magnetic declination, and while the gap might not be something ordinary people spend a great deal of time thinking about, it's a disparity that can last for centuries at a time.

For hundreds of years now in the UK, due to Earth's shifting magnetic north pole, declination has been negative, meaning compass needles have been pointing west of true north.

But nothing lasts forever. The agonic – an invisible line that connects Earth's north and south magnetic poles (and which represents zero declination wherever it passes through) – has been moving westward at approximately 20 kilometres (about 12 miles) per year. 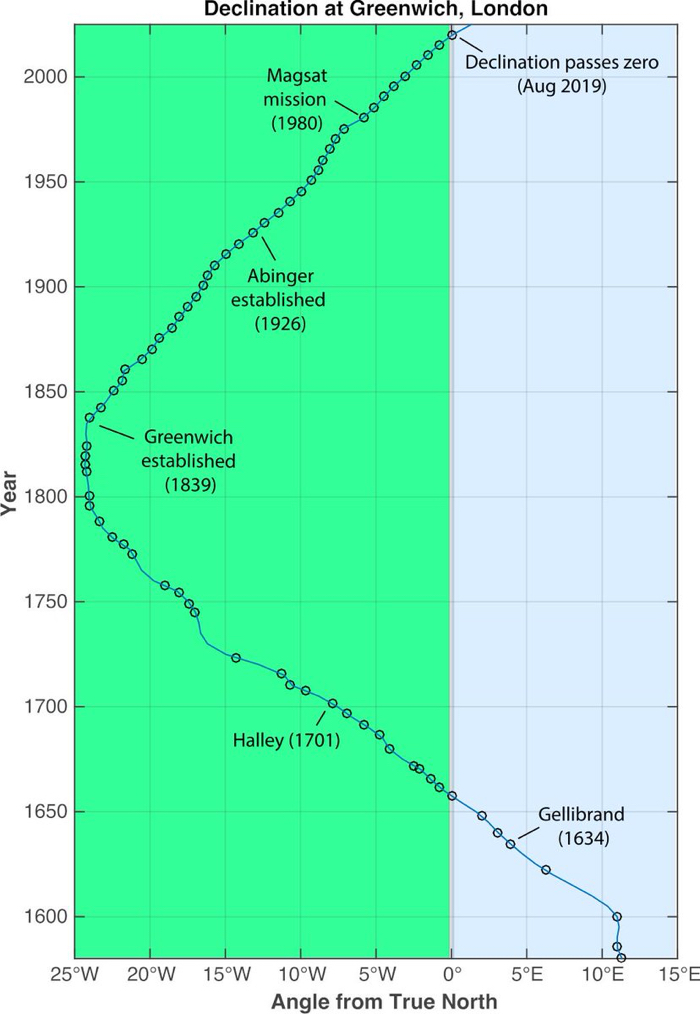 At that rate, it's set to pass through Greenwich this month – the historic site of the Greenwich Royal Observatory – making history in the process.

"At some point in September, the agonic will meet zero longitude at Greenwich," says geomagnetism researcher Ciaran Beggan from the British Geological Survey (BGS).

"This marks the first time since the Observatory's creation that the geographic and geomagnetic coordinate systems have coincided at this location."

As fate would have it, it was a coincidence that when the Royal Observatory was founded in the late 17th century – at the decree of King Charles II – compasses in Greenwich also pointed directly at true north, due to zero declination.

It's a phenomenon that's expected to endure well past this September's circumstantial synchronicity (from the perspective of compass users in Greenwich, at least).

"The agonic will continue to pass across the UK over the next 15 to 20 years," Beggan says.

"By 2040, all compasses will probably point eastwards of true north."

As for the more distant future beyond that, scientists' ability to foresee the magnetic movements are limited.

"It is, at present, impossible to predict how the magnetic field will change over decades to centuries," Beggan says, "so the compass may well point east of true north for another 360 years in the UK."