One of the two microelectrode arrays. (Wyss Center)

A pair of brain microchips could one day allow those in 'pseudocomas' to communicate whatever they want, a new breakthrough suggests.

In a first, a 34-year-old patient who lacked even the most subtle of muscle twitches has used the technology to share a few precious words with his family, using little more than an intent to move his eyes.

Similar devices have previously given patients with the fast-progressing condition amyotrophic lateral sclerosis (ALS) the means to send simple messages with extremely limited movements, but researchers say the severity of the man's condition here represents a significant advancement for the technology.

"To our knowledge, ours is the first study to achieve communication by someone who has no remaining voluntary movement and hence for whom the BCI is now the sole means of communication," says neuroscientist Jonas Zimmermann from the Wyss Center in Switzerland.

A pseudocoma is also known as 'locked-in' syndrome, because while these patients cannot walk or talk, they are still very much conscious, capable of seeing, hearing, tasting, smelling, thinking, and feeling.

Without the ability to move the mouth or the tongue, however, communication is severely limited. If the eyes can still move, patients can sometimes blink or 'point' with their pupils to make themselves understood, but in some advanced cases, even that basic form of communication is out of reach.

The man in this case was one such patient. Within months of diagnosis with the condition, he had already lost the ability to walk and talk. A year later, the patient was placed on a ventilator to help him breathe. A year after that, he lost the ability to fix his gaze.

The extreme isolation ultimately led the patient and his family to agree to a cutting-edge experiment.

Before the patient lost the ability to move his eyes, he consented to a surgical procedure that would implant two microchips into the part of his brain that controls muscle movement.

Each chip was equipped with 64 needle-like electrodes, which could pick up on his conscious attempts to move. That brain activity was then sent to a computer, which translated the impulses into a 'yes' or 'no' signal.

In the past, similar brain implants have allowed some patients with ALS to communicate via a computer typing program. But this is the first time an ALS patient without the ability to so much as use their eyes has been able to do something similar.

"People have really doubted whether this was even feasible," Mariska Vansteensel, a brain-computer interface researcher who was not involved in the study, told Science. 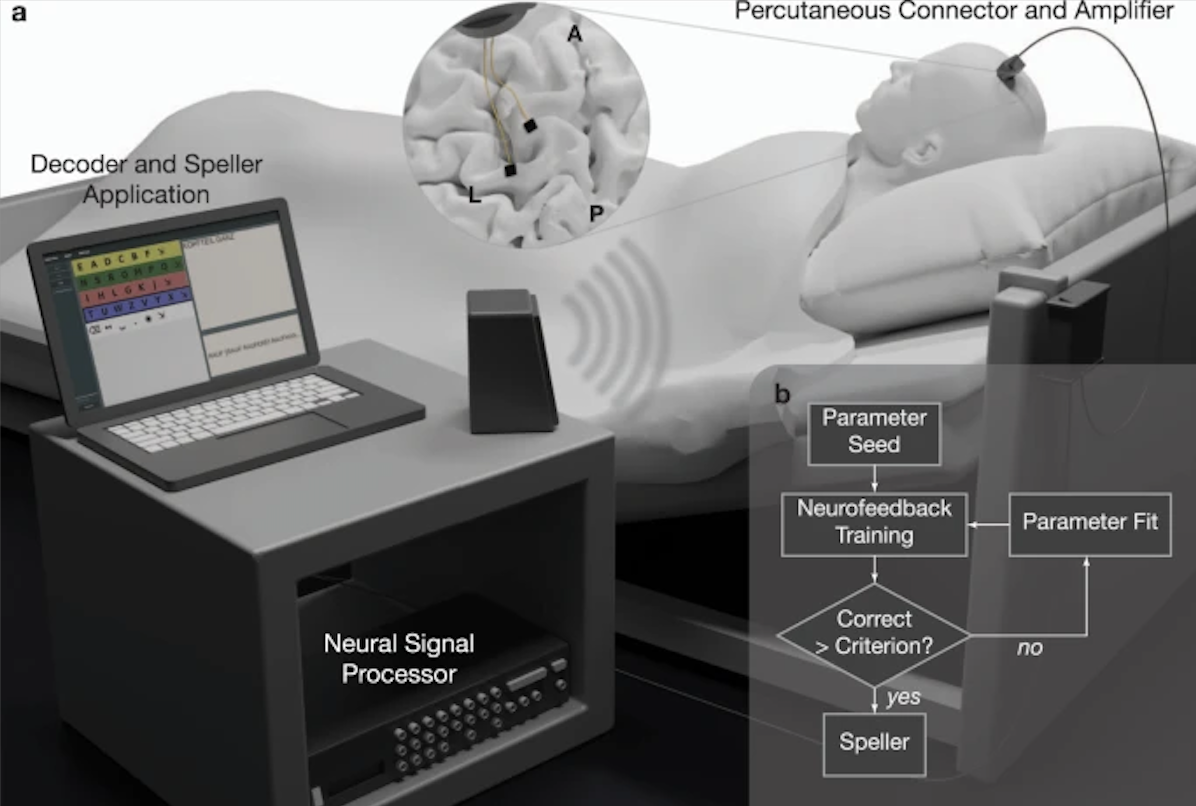 Above: The experimental setup of the brain implants, plus the biofeedback device and the spelling program.

The technique took months of training, but once the patient learned how to control the firing rates of his brain signals, he was able to respond to a spelling program and select specific letters, spoken out loud by the program, to form words and even sentences.

Each letter the patient heard took about a minute for the patient to respond to, making for slow progress, but nonetheless, for the first time in a long time, the device allowed this man to express himself.

"These apparent poor performances are primarily due to the completely auditory nature of these systems, which are intrinsically slower than a system based on visual feedback," the authors write in their study.

The first phrase the ALS patient successfully spelled out was a 'thank you' to the lead neurobiologist on his case, Niels Birbaumer.

Then, came a slew of requests for his care, like "Mom head massage" and "I would like to listen to the album by Tool [a band] loud".

Then, 247 days after the surgical procedure, the patient gave his verdict on the device: "Boys, it works so effortlessly".

On day 251 he sent a message to his kid: "I love my cool son". He then asked his child to watch a Disney film with him.

On day 462, the patient expressed that his "biggest wish is a new bed", and that the next day he could go with his loved ones to a barbecue.

"If someone is forming sentences like this, I would say it is positive. Even if it is not positive, it is not negative," first author of the study Ujwal Chaudhary told The Guardian.

"One time when I was there, he said, 'Thank you for everything, sister' [to his sister, who helps care for him]. It was an emotional moment."

The ability for someone in a pseudocoma to communicate obviously comes with a whole slew of ethical considerations.

After all, who condones the initial insertion? And once a person has learned to communicate again, can they speak for themselves and the future of their care? How accurate do these systems need to be before we can adequately interpret what patients are telling us?

We don't have rules or outlines for this type of technology quite yet, but if the device turns out to be useful for other patients, we will need to start confronting these quandaries.

Giving advanced ALS patients their voices back could be a huge medical breakthrough and a great relief for individuals and their families. How we respond to those voices is up to us.