Finally, a Contact Lens That Actually Beams Lasers From Your Eyes

Scientists have created an ultrathin, flexible film that can emit laser light - and successfully tested it on a contact lens, demonstrating the possibility of laser eye-beams.

Before you rush out and buy a Cyclops-style visor, it's not even close to powerful enough to cause damage. Instead, the researchers say, the technology has potential for use as wearable security tags, or even as a type of laser barcode.

The membranes containing the material are less than a thousandth of a millimetre thick, and flexible, which means they can easily be stuck to, or embedded into, polymer banknotes, or the soft plastics used for flexible contact lenses.

The laser is created by stamping nanoscale gratings into thin polymer membranes that are grown on glass substrates, Neil Savage described for IEEE Spectrum.

These membranes can then be placed on other surfaces.

When illuminated by another laser, it emits laser light of its own, with wavelengths between 420 and 700 nm, as defined by the structure and material of the grating, which can be adjusted to emit specific wavelengths, and even to emit light like the series of ones and zeroes in a barcode. 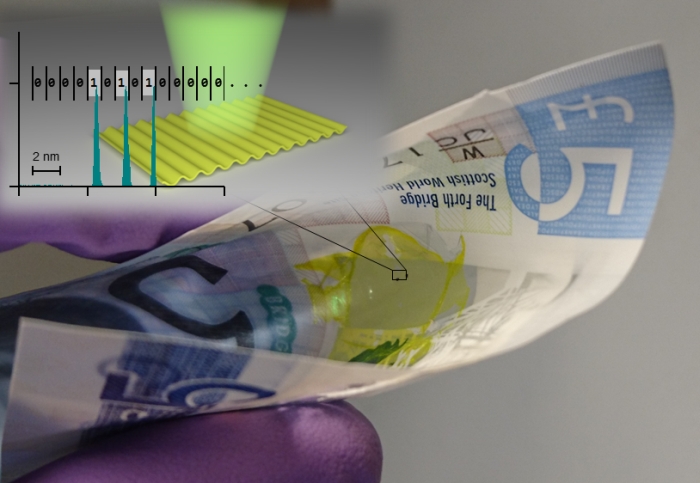 diagram showing how the laser could be used as an anti-counterfeiting measure on a polymer banknote. (University of St Andrews, UK)

This laser light is very low-powered, only around a nanowatt. That's a billionth of a watt - not remotely enough to power a small light. But it's enough to be picked up by a scanner - and would be excellent for security tags, the research team said.

"It would be very difficult for someone else to make a laser that had exactly the same wavelength," senior researcher and physicist Malte Gather of the University of St Andrews told Spectrum.

To test it, the research team integrated the membrane into a contact lens, which they stuck onto the excised eyeball of a cow (seen in the top image) - popular for this sort of testing for its structural similarity to the human eye, coupled with easy availability.

They also stuck one of the membranes onto one of the researcher's thumbnails. Both membranes produced a laser beam - and, importantly, the contact lens laser consistently remained within the safe zone for repeated eye exposure.

"We have demonstrated the fabrication and operation of ultra-thin, substrate-less organic lasers with extreme mechanical flexibility and lightweight," the researchers wrote in their paper. "These physical properties, combined with the low lasing threshold and the ability to generate unique output spectra, allows the application of membrane lasers as security label that can be applied to a wide range of substrates including banknotes, contact lenses, and fingernails."

The researchers also suggest it could move from prototype to mass production without much effort.