Artist's impression of a supernova. (NASA)

When it comes to the challenges posed by interstellar travel, there are no easy answers. The distances are immense, the amount of energy needed to make the journey is tremendous, and the time scales involved are (no pun!) astronomical.

But what if there was a way to travel between stars using ships that take advantage of natural phenomena to reach relativistic velocities (a fraction of the speed of light).

Already, scientists have identified situations where objects in our Universe are able to do this – including hypervelocity stars and meteors accelerated by supernovae explosions.

Delving into this further, Harvard professors Manasvi Lingam and Abraham Loeb recently explored how interstellar spacecraft could harness the waves produced by a supernova explosion in the same way that sailing ships harness the wind.

The study that details their research, Propulsion of Spacecrafts to Relativistic Speeds Using Natural Astrophysical Sources, recently appeared online and was also the subject of an article at Scientific American. As they explain in their study, it is possible that a sufficiently-advanced civilization could use the blasts of energy released by supernovae to accelerate spacecraft to relativistic speeds.

These spacecraft would be able to harness the explosive force using a light sail (aka solar sail) or a magnetic sail - two propulsion concepts that have been explored at length by astrophysicists.

These concepts rely on the electromagnetic radiation generated by the Sun to create pressure against a highly-reflective sail, thus generate propulsion in a way that does not require engines or propellant.

Since propellant is one of the most significant contributors to a spacecraft's overall mass, light sail/magnetic sail concepts have the benefit of being much lighter than conventional spacecraft – and therefore, much cheaper to launch into space. 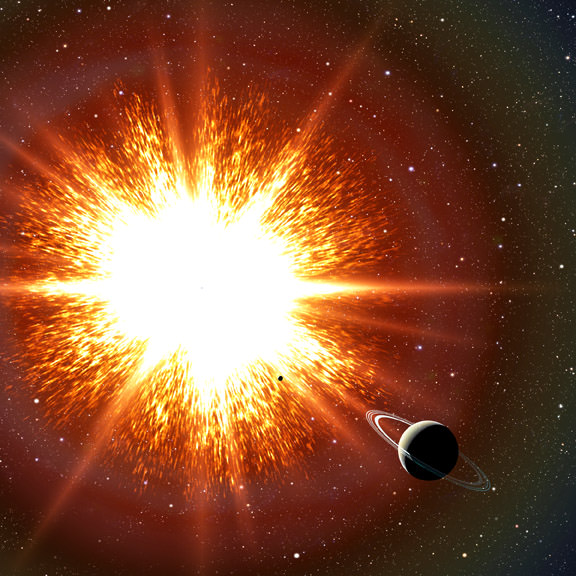 Another possibility is to rely on directed-energy (lasers) to accelerate this kind of spacecraft, allowing it to achieve speeds much higher than what would be possible with solar radiation alone.

Loeb, who in addition to being the Frank D. Baird Jr. Professor of Science at Harvard University is also the chair of Breakthrough Starshot's Advisory Committee. As part of the non-profit organization, Breakthrough Initiatives, Starshot is currently working towards the creation of a light sail that would be accelerated by lasers to a speed of 20 percent the speed of light – allowing it to make the journey to Alpha Centauri in just 20 years.

As Loeb told Universe Today via email, it was while contemplating how such a spacecraft could be accelerated naturally that the idea of using supernova occurred to him:

"Back in December 2019, my wife and two daughters were on travel and I had the luxury of staying at home alone for a week and thinking about science. While taking a shower, I thought on how the Sun is not effective at launching lightsails to high speed, but a brighter source of light might be. I followed this thought with detailed calculations on supernovae, which are billions of times brighter than the Sun for a week and realized that lightsails with existing parameters can reach the speed of light if they are strategically placed ahead of time around the massive star that is about the explode."

Originally, Loeb explained this idea in an article that appeared in Scientific American on 6 February, 2020, titled Surfing a Supernova. The original article is also available on the Harvard-Smithsonian Center for Astrophysics (CfA) website. As he argued there, a supernova would be capable of accelerating a light sail that weighs "less than half a gram per square meter to relativistic speeds", even if it were millions of kilometres away.

"My collaborator, Manasvi Lingam, saw my commentary and suggested that we write a full-fledged scientific paper on the subject, exploring the feasibility of launching light sails to the speed of light around other bright sources as well, such as black holes or pulsars," said Loeb.

"I shared my notes with him and they seeded our collaborative paper."

To test this hypothesis, Lingam and Loeb considering how a light sail could be accelerated by the explosion of a number of astrophysical objects. This included massive stars, microquasars, supernovae, pulsarwind nebulae, and active galactic nuclei.

As Lingam, who was the lead author on the resulting paper, explained to Universe Today via email:

"We developed mathematical models to determine the maximum speed that is attainable by light sails and electric sails. The maximum speeds varied depending on the propulsion system utilized as well as the astrophysical objects in consideration."

For anyone who has the means, the advantages of this approach are obvious. Compared to conventional light sails and magnetic sails, a sail that takes advantage of the boost provided by an exploding star would be able to reach relativistic speeds without the need for expensive infrastructure (i.e. a large laser array).

Of course, the disadvantages of such a method are also obvious. For starters, there is the issue of timing. Not only are supernovae a rare occurrence; scientists are unable to accurately forecast them with anything other than a large margin of error – often millions of years.

Anyone hoping to take advantage of exploding stars would need to be able to make more accurate estimates and be willing to wait a very long time.

But as Lingam and Loeb explored, the disadvantages go beyond this to include the particular hazards created by supernovae. As Loeb indicated:

"The main challenges are friction with the ambient gas, which may be dense in the vicinity of a massive star due to mass loss by winds. One can overcome the challenge by folding the sail throughout the journey except during the launch period when the opening of the sail can be triggered by the supernova flash of light."

On top of that, there are engineering and design challenges that would need to be addressed beforehand. First, the sails must be made of highly reflective material to avoid absorbing too much heat and burning up.

Second, they would also need to be placed in a folded configuration until the star explodes to prevent them from being pushed away from their launch point by solar radiation. 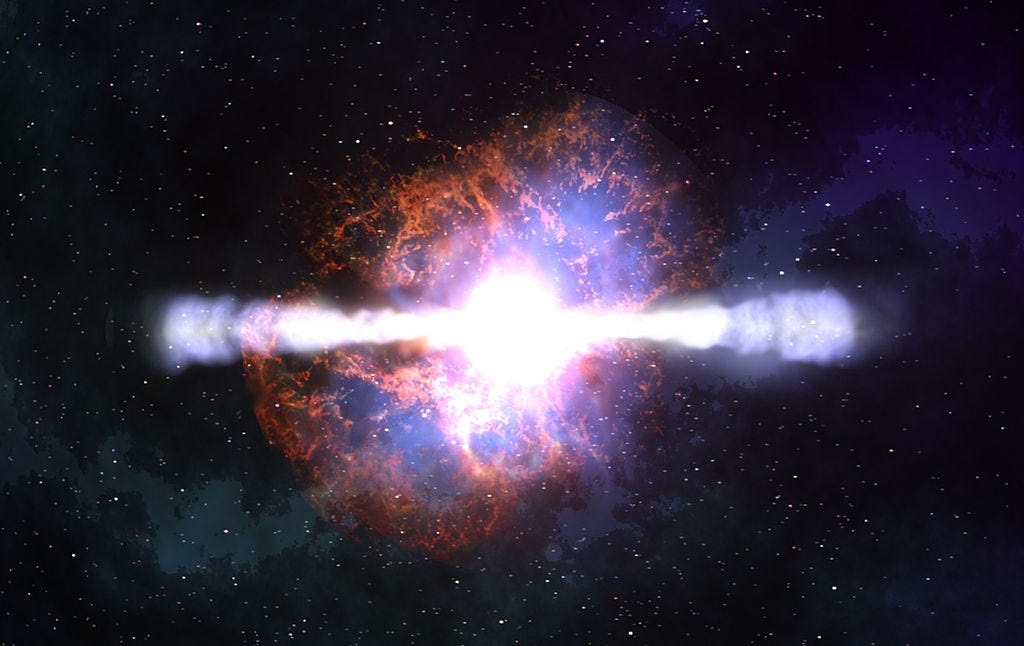 Artist's impression of a supernova. (NASA)

Finally, the acceleration path of the sail must be carefully selected ahead of time to avoid any obstacles and minimize the risk of collision with large objects (like asteroids).

Lastly, the sail itself must have some type of shielding or configuration that will protect it from gas and solid particles in interstellar space. Given that the sail will be traveling at an incredibly high velocity, even the tiniest particles would pose an extreme collision risk.

As Lingam explained, their results show that these challenges are surmountable:

"There are many challenges such as sail stabilization, maintaining high reflectance and preventing heating, and avoiding damage while traveling in the source environment as well as the interstellar medium. Most of these issues may be overcome, at least in principle, by utilizing electric sails instead of light sails. Alternatively, if one decides to stick with light sails, then one will have to fold the sail during some stages of the voyage, choose an unusual sail architecture, and rely upon nanophotonic structures to improve stability."

In short, their results show that a sufficiently-advanced species would be capable of positioning light sails/magnetic sails around dying stars so they could be accelerated once the star explodes. These sails could serve as messenger craft, demonstrating the existence of advanced civilizations by traveling to inhabited star systems.

In this respect, the feasibility of this interstellar concept could have implications in the ongoing Search for Extraterrestrial Intelligence (SETI). As Loeb and colleagues have argued in previous studies, the possibility of directed-energy propulsion means that errant flashes of laser activity could be interpreted as a sign of technological activity (aka technosignatures).

"This conceptual paradigm echoes the spirit of Dyson spheres, the megastructures hypothesized by Freeman Dyson for harvesting the energy of stars that aren't likely to explode," said Loeb.

"If we are lucky to have many technological civilizations in our galaxy, there might be swarms of light sails around massive stars, patiently awaiting their explosions."

"In searching for technosignatures, our work suggests that one might look in the vicinity of high-energy astrophysical sources such as supernovae and quasars for radio signals, etc," added Lingam.

"Of course, the probability of success is entirely dependent on whether such advanced technologies species exist – this is a question to which we do not have any answer yet."

For the time being, it looks like that aggravating thing known as the Fermi Paradox is going to endure a little while longer. But with more things to be on the lookout for, and with next-generation telescopes coming online very soon, we are well-equipped to find evidence of extra-terrestrial intelligence (if there is any to be found).

Who knows? Perhaps our Solar System has been visited by supernova-riding interstellar sails already! Remember this interstellar visitor?