There Are Mysterious Wrinkles Inside Our Hearts. This Might Be What They're For

Every single one of us carries a mystery deep inside our hearts that has perplexed us for centuries.

There's a web-like network of bumps lining our ventricles known as trabeculae carnae that seems important, especially while the cardiovascular system is still developing. We've just never been sure what functions it might serve – if any – once we're fully grown.

To get to the bottom of this anatomical curiosity, an international team of researchers have pulled some big numbers, comparing cardiac magnetic resonance imaging scans from some 25,000 patient records in three different health databanks.

These images were then combined with genetic data in what's known as a genome-wide association study to get a sense of how subtle variations in the fractal pattern of trabeculae relate to an individual's genes, cardiac performance, and risks of cardiac disease.

If you've ever had the privilege of peering inside the heart of a sheep, cow, or even a human, you'd quickly notice how groovy it looks. Branching fenestrations warp the deep crimson muscle of its chamber walls, in strong contrast to the smooth lining of other major vessels. 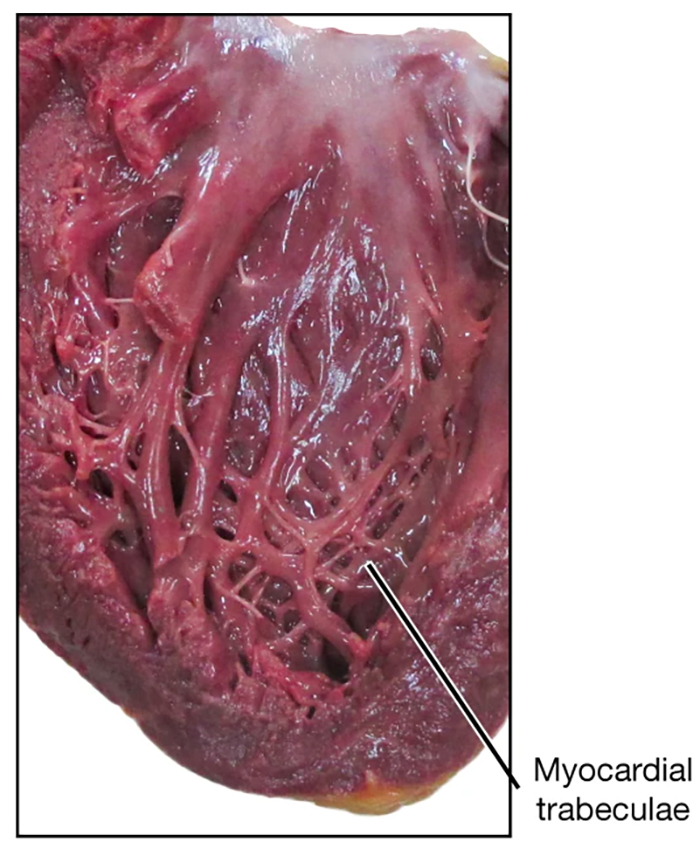 While these strange folds have no doubt attracted attention since ancient times, the oldest surviving depictions we have of them in any detail are among the notes of the 16th century polymath Leonardo Da Vinci.

In fact, one of the more prominent bands of tissue, a thick strand of muscle in the right ventricle called the trabecula septomarginalis, is sometimes referred to as Leonardo's cord in his honour.

Centuries of investigation have provided plenty of insights into what at least some of these bands of muscle might do.

Leonardo's band, for instance, has long been thought to help prevent the heart from overinflating. Since it wraps around an important bundle of nerves, it might also provide a short cut for conductivity.

As for the purpose of the rest of the wrinkles, they might also serve a variety of uses.

The signalling pathways responsible for their development in an embryo are well conserved, implying evolution doesn't respond well to them being messed around with. It's likely that the bumpy surface raises the surface area enough for nutrients and oxygen to diffuse into this hungry tissue before circulation ramps up.

This serves as a reasonable explanation for a developing heart, but what about later in life? Could it affect the way blood swirls about in the chamber? Play a role in the carrying of electrical pulses?

Perhaps the most important question to address first is whether they're in fact important at all.

Since the defining characteristic of these lumps and bumps is the way they branch, the researchers used biomechanical modelling and an analytical technique based on Mendelian randomisation to show differences in the trabeculae's fractal patterns are associated with differing risks of heart failure.

"Leonardo da Vinci sketched these intricate muscles inside the heart 500 years ago, and it's only now that we're beginning to understand how important they are to human health," says clinical scientist and consultant radiologist Declan O'Regan, from the MRC London Institute of Medical Sciences.

"This work offers an exciting new direction for research into heart failure, which affects the lives of nearly 1 million people in the UK."

To pin down their actual function, the team simulated the blood flowing through hearts lined with different fractal patterns of trabeculae.

Combining their observations with medical and genetics data from the UK Biobank, they felt confident the texture interrupted the flow of blood to help it glide through more easily, not unlike how dimples on the surface of a golf ball affect air flow.

"Perhaps even more importantly, we also showed the value of a truly multidisciplinary team of researchers. Only the combination of genetics, clinical research, and bioengineering led us to discover the unexpected role of myocardial trabeculae in the function of the adult heart."