A new study suggests having depression for an extended period of time could cause changes in the structure of the brain.

Knowing this could arm us with improved treatments - ones tailored for how long the depression has lasted.

"Greater inflammation in the brain is a common response with degenerative brain diseases as they progress, such as with Alzheimer's disease and Parkinson's disease," says senior researcher Jeff Meyer. 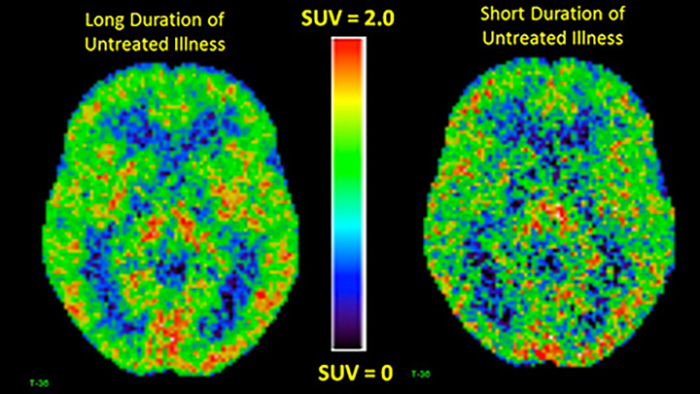 Scientists don't consider depression a degenerative brain disease, like Alzheimer's and Parkinson's - but it may be progressive rather than static over a long period of time, according to the new study.

That's not a huge sample size, so we shouldn't jump to any broad conclusions - but the results are certainly an interesting new clue as to what's going on in the brain when someone is depressed.

Those with longer-term depression showed up to 30 percent more of the translocator protein (TSPO) in their brains, a marker of inflammation that's produced when the body's microglia - the central nervous system immune cells - are working overtime.

Inflammation levels were also higher in those with long-term depression compared with the control group.

Microglia are essential in keeping the brain healthy, but problems can develop when the cells produce too much inflammation.

The TSPO was picked up by a type of brain imaging called positron emission tomography or PET, building on a 2015 study by the same team that had found a strong link between brain inflammation and depression.

The next step will be to gather more data, but it may be that doctors will eventually be able to use different approaches based on how long someone has had depression – medications that specifically target inflammation could be one option, for example.

And this is not the only way depression can leave marks on the brain. Last year a study of more than 3,461 individuals found a connection between depression and reduced integrity in people's white matter of the brain.

Other studies have shown that persistent depression can shrink the hippocampal area of the brain, leading to problems with behaviour, emotions, and memory.

It's a complex picture, but any study that tells us more about depression and its effects on our physical and mental well-being should prove useful in working out better ways of beating it.

The team behind this study now wants to see more research into patients who've had untreated depression for an extended period of time. Let's hope they find some light at the end of the tunnel.

The research has been published in The Lancet Psychiatry.