Astronomers have found a white dwarf that was once two white dwarfs. The pair of stars merged into one about 1.3 billion years ago. The resulting star, named WDJ0551+4135, is about 150 light years away.

A white dwarf is the end state of stars like our Sun. Once they've consumed their nuclear fuel, they expel their outer material.

What's left is an indescribably dense collection of matter, with no fusion taking place. It's luminosity comes from its stored thermal energy.

This white dwarf is different than others. Normally, a white dwarf's atmosphere doesn't contain much carbon. But WDJ0551+4135 has an atmosphere with elevated levels of carbon. It's also much more massive than a typical white dwarf. Both of those characteristics stood out to the astronomers behind a new study announcing the discovery.

The lead researcher of the study is Dr. Mark Hollands, from the Department of Physics at the University of Warwick. The study is titled "An ultra-massive white dwarf with a mixed hydrogen–carbon atmosphere as a likely merger remnant." It's published in the March 2nd edition of Nature Astronomy.

Before a star becomes a white dwarf, it goes through a red giant phase. If the red giant doesn't have enough mass to fuse carbon, then carbon and oxygen will collect in a mass at the star's center.

As the star sheds it outer layers, it eventually leaves behind only a remnant, the white dwarf. Most dwarfs are primarily composed of that carbon and oxygen, though there are other types.

But normally, that carbon is not visible. A thick layer of helium usually blocks it. In their study, the team used the William Herschel Telescope to examine the white dwarf spectroscopically. That showed that the atmosphere had an unusually high carbon content, something that should not be possible.

"This star stood out as something we had never seen before. You might expect to see an outer layer of hydrogen, sometimes mixed with helium, or just a mix of helium and carbon," said lead author Hollands in a press release.

"You don't expect to see this combination of hydrogen and carbon at the same time as there should be a thick layer of helium in between that prohibits that. When we looked at it, it didn't make any sense."

In stellar terms, most white dwarfs are not that massive. They're typically about 0.6 times as massive as our Sun.

But WDJ0551+4135 is different. Its mass is almost double that of a typical white dwarf, at 1.14 solar masses. It's still extremely compact for an object with that much mass, just like other white dwarfs. It's only about two-thirds the diameter of Earth.

It's velocity through space also doesn't match up with other white dwarfs. Astronomers use the term "local standard of rest" to describe the mean motion of matter in the Milky Way. It's between 202–241 km/s.

Since older stars travel faster than young ones as they both orbit in the Milky Way, this white dwarf must older. In fact, its high velocity means its faster than 99 percent of other white dwarfs in the galaxy.

In their study the authors say: "We found this speed to be at the 99th percentile of the three-dimensional (3D) velocity distribution of nearby white dwarfs with similar absolute magnitudes. Because stellar velocity dispersion increases with system age, the fast kinematics of WD J0551+4135 may signify a system age much older than implied simply from the white dwarf cooling."

All three characteristics set it apart from other white dwarfs: its velocity/age, its mass, and its visible carbon.

"We have a composition that we can't explain through normal stellar evolution, a mass twice the average for a white dwarf, and a kinematic age older than that inferred from cooling," said Hollands.

"We're pretty sure of how one star forms one white dwarf and it shouldn't do this. The only way you can explain it is if it was formed through a merger of two white dwarfs." 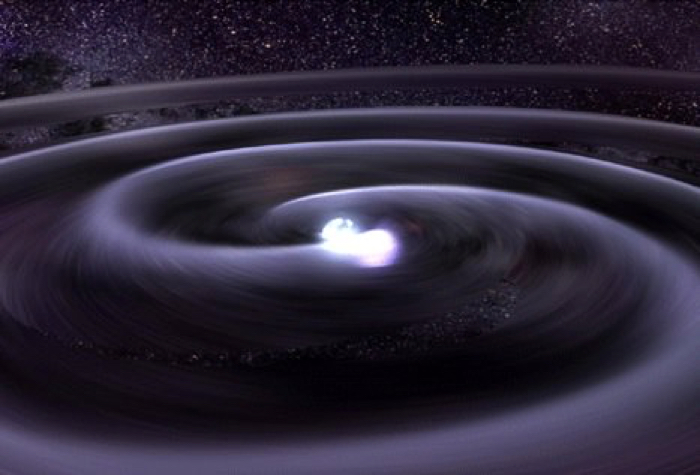 The merged-dwarf is likely the outcome of billions of years of stellar evolution in a binary star system. One of the stars reaches its red giant phase before its partner, and expands, enveloping the partner. As the first star then shrinks, the orbit between the two draws closer. Then the second star goes through its red giant phase, expanding and enveloping the other.

It takes billions of years, but eventually the gravitational wave emission makes the orbit shrink even more. The end is in sight, or the marriage maybe, and when the orbit shrinks sufficiently, the stars merged into one.

Astronomers have predicted the existence of merged white dwarfs, but this one still breaks expectations. They predict that mergers should be between two different-sized white dwarfs. But WDJ0551+4135 appears to be a merger between similar size dwarfs.

There's an upper mass limit to white dwarfs, even for a pair that have merged. If the resulting stellar object is sufficiently massive, it will explode as a thermal runaway supernova.

Scientists can understand a white dwarf's age by looking at its temperature. White dwarfs don't generate any heat because there's no fusion anymore. They're more like embers than stars, and by monitoring the star's cooling, they can determine its age.

But when two white dwarfs merge, the cooling process starts over.

There's no precise way to determine this one's age, and the two white dwarfs may have been white dwarfs for billions of year before merging. Still, the researchers think that the merger itself took place about 1.3 billion years ago.

"There aren't that many white dwarfs this massive, although there are more than you would expect to see which implies that some of them were probably formed by mergers," said Hollands.

"In the future we may be able to use a technique called asteroseismology to learn about the white dwarf's core composition from its stellar pulsations, which would be an independent method confirming this star formed from a merger."

"Maybe the most exciting aspect of this star is that it must have just about failed to explode as a supernova – these gargantuan explosions are really important in mapping the structure of the Universe, as they can be detected out to very large distances," said Hollands.

"However, there remains much uncertainty about what kind of stellar systems make it to the supernova stage. Strange as it may sound, measuring the properties of this 'failed' supernova, and future look-alikes, is telling us a lot about the pathways to thermonuclear self-annihilation."