Divers Are Exploring This Giant Underwater River, Shrouded in a Cloud of Toxic Gas

Up on Mexico's Yucatan Peninsula, between the Caribbean Sea and the Gulf of Mexico, the dense, tropical jungle is littered with sinkholes called cenotes, where limestone has collapsed to expose the groundwater below.

One of the most incredible sinkholes in the region is the Cenote Angelita, which contains a distinct underwater river that flows through some 30 metres below the surface. This river, where salt water meets fresh water, is blanketed by a thick cloud of hydrogen sulphide - and it would kill you if you tried to breathe it in.

Found near the ancient Mayan city of Tulum on the east coast of the Yucatan Peninsula, Cenote Angelita (or "little angel") appears perfectly normal from the surface.

It looks just like a deep, tranquil pool of fresh water, surrounded in vegetation, but if you dive down about 30 metres (100 feet), you'll find something odd - a misty river flowing on its own through its clear, still surroundings. 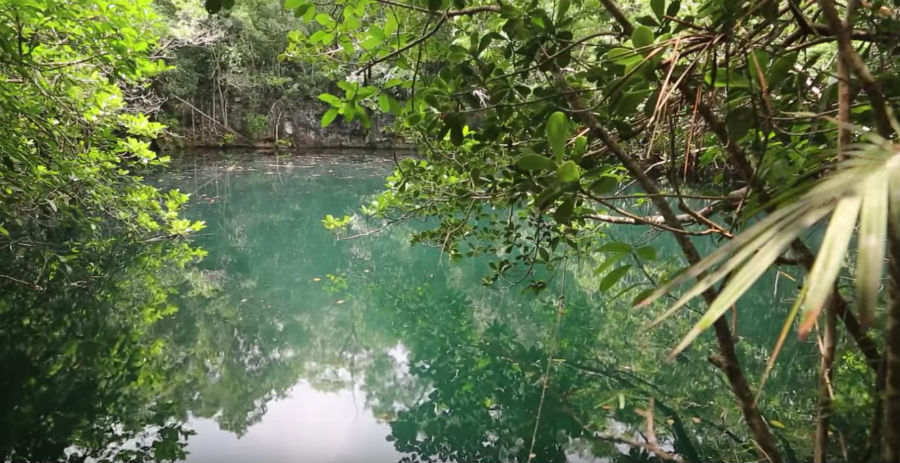 On the surface. Credit: TecdiveTV/YouTube

The cloud of hydrogen sulphide - a colourless, toxic gas that smells like rotten eggs - is more than 3 metres thick (10 feet), and it makes diving through it extremely difficult.

As Canadian videographer Mike Corey explains on his YouTube page:

"Once through [the cloud], it turns into a night dive, and you need to use your torches. You only have a few minutes beyond the layer before you have to start ascending again. It's a murky landscape, with petrified trees sticking out of the cloud.

Mayans believed that cenotes were the gateway to the underworld, and yeah, after visiting this one in particular, I can see why."

Corey admits that this was probably one of the most advanced dives he's ever done, saying divers tend to panic once they hit the misty layer and find it hard to see anything.

So how did that swirling cloud of toxic gas get there in the first place?

Cenotes are filled with both fresh and salt water, because when the limestone collapses and sinks, it creates a massive reservoir where the newly exposed fresh groundwater meets the salt water that's seeping in from the ocean via an underground channel.

As Jennifer Berglund explains for Discover Magazine, like oil on water, the freshwater will floats above a denser layer of saltwater, and where they mix, they'll form a layer of brackish water called the halocline.

"Whereas saltwater and freshwater are clear, the halocline appears somewhat like a hazily defined liquid body rippling within the water," says Berglund.

"It can act like a barrier, preventing leaf litter from the surrounding forest - along with plastic bags, soda cans, and other light trash - from sinking into the denser saltwater. Along with the debris, the upper freshwater layer contains more oxygen than the saltwater below, and it supports a completely different set of life-forms."

Sometimes, when lots of vegetation and organic matter has made its way into the sinkhole, the rotting and decomposition can produce a thick cloud of hydrogen sulphide, as we can see in Cenote Angelita:

As it happens, that crazy lake under the sea that made the internet flip out last month is just on the other side of the Yucatan Peninsula, in the Gulf of Mexico.

While that particlular "jacuzzi of despair" did not form inside a sinkhole, it contains conditions similar to that of the Cenote Angelita.

In the 'lake within the sea', the water is about five times as salty as the ocean surrounding it, and it contains highly toxic concentrations of methane and hydrogen sulphide that can't mix with the surrounding sea, but will kill anything that ventures too close.