For the first time, doctors have used a type of nerve stimulation device to restore consciousness in a patient who spent 15 years in a vegetative state due to brain injury.

The man showed significant improvements in movement and attention after just one month, and this exciting case study could become a starting point for new treatments for patients with similar injuries.

Unlike a coma, in which a person is asleep and unresponsive, a patient in a vegetative state is awake, but shows no signs of awareness or cognitive function, even though they can have basic reflexes like blinking when startled.

Sometimes people can transition from a complete vegetative state to what's known as a minimally conscious state (MCS), in which patients have at least a tiny bit of awareness of their surroundings.

But when a person has been in a vegetative state for more than 12 months after a traumatic brain injury, they are deemed to be in that state permanently and are highly unlikely to ever recover.

The patient in question was a 35-year-old man who suffered a traumatic brain injury in a car accident and had been in a vegetative state ever since, for 15 years.

The team used a medical implant that stimulates the vagus nerve, one of the most important nerves linking the head to the rest of the body. Shaped like flat, round batteries, vagus nerve stimulators (VNS) are sometimes called "pacemakers for the brain" and are used in treating epileptic seizures.

It wasn't just a random guess that this device might help a patient in a vegetative state - doctors worked from a hypothesis based on previous research that showed improvements in patients with MCS when they got stimulation to the thalamus, a brain centre involved in coordinating sensory signals.

The vagus nerve serves as a direct link to the thalamus (amongst other brain areas), and vagus nerve stimulation has previously shown to increase metabolism in that part of the brain, so the team wanted to test what would happen if they used a VNS implant in a vegetative state patient.

The doctors measured the patient's behaviour in response to stimulus, and recorded an electroencephalogram (EEG) and PET scans of his brain before implanting the stimulator, and then again afterwards.

Then they gradually increased the intensity of the stimulation. After just one month - once the electric current in the device reached 1 milliampere, the patient started showing consistent improvements "in general arousal, sustained attention, body motility and visual pursuit."

For the first time in 15 years, he showed consistent, measurable signs of consciousness. And that's huge - according to the doctors, their patient transitioned from a vegetative to a minimally conscious state.

"The man began responding to simple orders that had been impossible before. For example, he could follow an object with his eyes and turn his head upon request," the team reports in a press statement.

"His mother reported an improved ability to stay awake when listening to his therapist reading a book."

And it wasn't just behavioural improvements, either - both EEG findings and a PET scan confirmed there was consistent, sustained activity in parts of the brain that are deemed to be markers of consciousness. 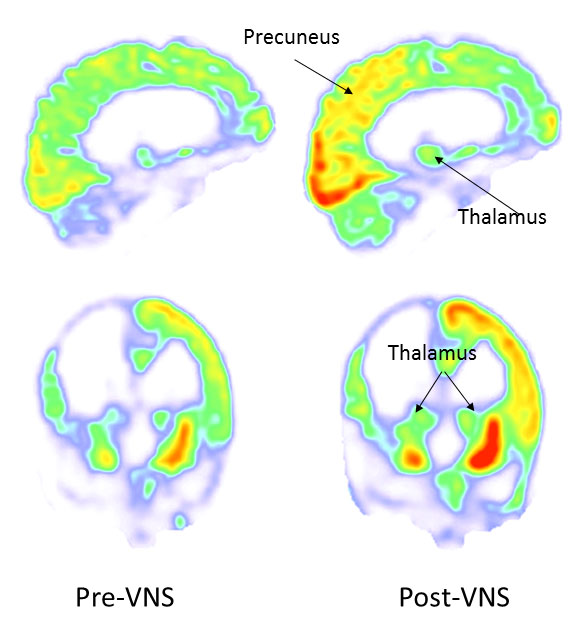 As the team writes in their report, their unique findings directly contradict the general assumption that spending 12 months or longer in a vegetative state makes the condition irreversible.

"Brain plasticity and brain repair are still possible even when hope seems to have vanished," says lead researcher Angela Sirigu from the Cognitive Neuroscience Centre in France.

But we have to remember that one exciting case study doesn't make for a new treatment just yet. It's really early days, as we only have data for one patient so far, but we must admit the results sound promising.

The team is now planning to use this case study as a starting point for a larger trial investigating how VNS might be used as a therapy for such patients.

The case study has been published in Current Biology.

Update (09 Oct 2017): Since this story was published, it has emerged that the patient who was at the centre of this remarkable case study actually passed away a few months after the treatment, from an unrelated cause. The man, who remains anonymous, died from a lung infection.

Even though this doesn't change the outcome of the treatment, it has now drawn attention because the doctors didn't mention this fact in the case study. They cite the reasoning that doing so could have led to people linking the death with the treatment the patient received.

However, this has now led to accusations of 'concealing' the death, especially since some reports on the case suggested the patient is still being monitored by the team.

"This was a mistake, because it was obvious that we'd be asked what happened to the patient," one of the team, Jacques Luauté from Claude-Bernard University in Lyon, told Le Monde.