From sniffing out diabetes, cancers and positive COVID-19 cases to being disgustingly interested in poop, we all know dogs have a mighty powerful sense of smell. Yet researchers were surprised to see the sheer extent of the smell wiring within dog brains.

"We've never seen this connection between the nose and the occipital lobe, functionally the visual cortex in dogs, in any species," Cornell University neuroimaging researcher Pip Johnson explains.

"It was really consistent. And size-wise, these tracts were really dramatic compared to what is described in the human olfactory system, more like what you'd see in our visual systems."

This is likely what allows our clever canine friends to function extremely well, even without sight. For example, blind dogs can still play fetch.

"This is fabulous," retired army veterinarian Eileen Jenkin, who was not part of the study, told Laura Sanders at Science News.

"There have been lots of people who theorized that this connection existed, based on the behavior of trained dogs and detection dogs, but nobody has been able to prove it."

A dog's nose in itself is impressively equipped, with more than 220 million odor-detecting cells, compared to our 50 million or so olfactory receptors (at last count).

With this snuffling organ alone, dogs can form spatial awareness, read chemical communications, sense our moods, and track all manner of things, including weak heat sources. So all these extra connections do add up.

"It makes a ton of sense in dogs," says Johnson. "When we walk into a room, we primarily use our vision to work out where the door is, who's in the room, where the table is.

"Whereas in dogs, this study shows that olfaction is really integrated with vision in terms of how they learn about their environment and orient themselves in it."

Within the 23 scanned dogs, the researchers also identified information pathways of white brain matter strongly connecting the olfactory bulb (bottom left in the image below) with four other brain regions too. 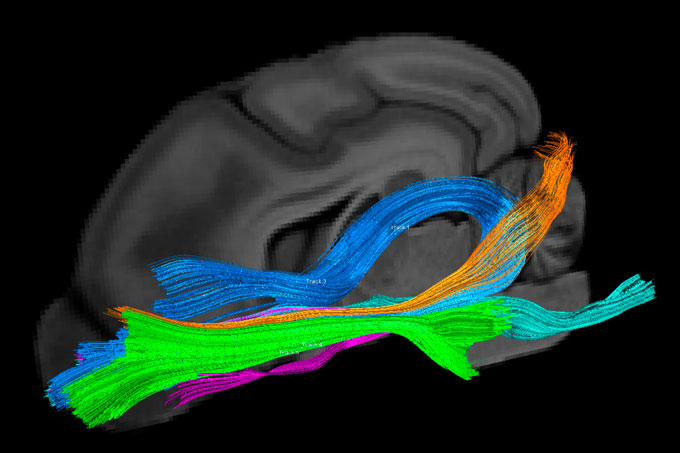 A map of nerve tracts in the dog brain. (Pip Johnson/Trackvis Software)

Just as in humans, the olfactory paths to the piriform cortex (green) and limbic system (blue) are likely to connect smell to memory and emotions. The entorhinal cortex (pink path) is thought to process smells and also connect to memory.

As well as the connections to vision, links between the olfactory bulb and brainstem through the corticospinal tract (turquoise) were also an unexpected find. Those connections may allow more instinctual responses to smells to occur, without roping in higher brain processing, Andrews and colleagues suspect.

The researchers dissected two canine brains to confirm what they saw in the imaging models.

They do, however, caution that electrophysiological research is required before we can say for sure what these physical connections all mean beyond speculation based on what we know of these brain regions from other species.

And of course, we have no idea at this stage if this means dogs can 'see' smells, although the brain is capable of some pretty weird things.

"These findings suggest the olfactory system plays a prominent if not dominant role in canine cognition and has connections in most of the major processing pathways making it a vital network to consider when studying canine cognitions," the team concludes in their paper.

Andrews and colleagues aim to map the olfactory systems of cats and horses next. Both have amazing powers of smell too, but horses are herbivores so they probably use their sense of smell very differently.

Preliminary data even hints the olfactory brain tracts in cats may be even more extensive than in dogs.

This research was published in The Journal of Neuroscience.