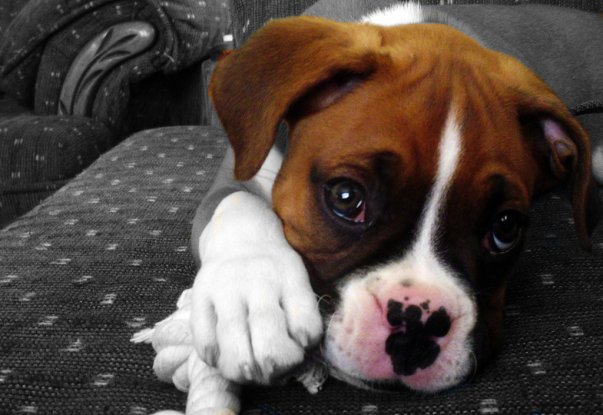 Scientists have finally worked out why you love your dog just like a child. New research has shown that when you look into your dog's eyes, it triggers a spike in the "love hormone" oxytocin in both species, which is the same mechanism that helps mothers bond with their newborn babies.

Interestingly, the study showed that we don't have the same physiological connection with wolves, so could not only help explain why we're so freaking obsessed with our canine pets, but also how dogs evolved from wild wolves into our domesticated best friends.

Writing in the current issue of Science, the team, led by Miho Nagasawa from Azabu University in Japan, explains:

"The findings support the existence of an interspecies oxytocin-mediated positive loop facilitated and modulated by gazing, which may have supported the co-evolution of human-dog bonding by engaging common modes of communicating social attachment."

Previous research by Nagasawa had already suggested that dogs might be able to trigger oxytocin in their owners. But the team wanted to take things a step further and work out whether dogs were actually causing this process. To find out, they took 27 dogs and placed them in a room with their owners and two strangers. The dogs were then either sprayed on the nose with saline or oxytocin.

Female dogs that were sprayed with oxytocin spent much more time gazing specifically at their owners than those that received the saline. And this triggered an increase in the oxytocin levels in both the owners' and pets' bloodstreams, suggesting a direct feedback link. For some reason, male dogs weren't as sensitive to the oxytocin spray.

The team then looked at the oxytocin levels in domesticated wolves and the owners who had raised them from birth, but found no link between the amount of time the wolves looked at their owners and the presence of love hormone in either of their bloodstreams.

The researchers say this suggests that wolves living alongside humans thousands of years ago "hijacked" the parent-child bonding mechanism, and that we've now co-evolved to have such a close relationship with domesticated dogs as a result.

In an accompanying editorial in Science, Duke University researchers Evan MacLean and Brain Hare, who weren't involved in the study, write:

“[The] findings suggest that dogs have taken advantage of our parental sensitivities – using behaviours such as staring into our eyes – to generate feelings of social reward and caretaking behaviour ... [It's] a powerful mechanism through which dogs win our hearts - and we win theirs in return."

And we always thought cats were the manipulative ones.