Don't Be Fooled by a Viral GIF That Claims Earth Is Actually Lumpy, Not Round

If you are one of the 56,600 people who follow @DesignTimes on Twitter, then there's something you should know. One of the account's latest tweets was of a science GIF that shows a lumpy version of Earth, stating that this is what the planet would look like without any oceans. Wrong!

Don't be fooled: While the GIF itself is scientifically accurate the tweet's explanation of what it shows is entirely false.

A quick look at the responses to this tweet can easily prove that:

Models like these are called geoids, and this GIF is based on one of the most accurate geoids ever made. It was first released in 2011. The model was based on two years of measurements  taken from the European Space Agency's Gravity Field and Steady-State Ocean Circulation Explorer (GOCE) satellite, which map the structure of Earth's mantle - the middle layer of the planet between the central core and outer crust.

You can see a GIF of the original model below, which was made from two years of data taken by the GOCE satellite in orbit around Earth:

What it means to measure Earth's gravity

These types of geoid models are a helpful tool for climate scientists who want to understand how the ocean circulation and sea-level change will affect climate change.

To do this, the geoid removes all of the factors that help shape Earth's surface, such as tides, weather, and wind. When you do this, the only thing that's left is gravity.

The reason Earth appears lumpier is because it does not have a uniform mass - which is one of the key elements in measuring gravity. If you could sample different sections of Earth's mantle, you would get different materials of varying densities.

As a result, the denser parts of the mantle exert a stronger gravitational force on the water above compared to the less-dense regions. So where gravity is strong, you see low dips, shown in blue below, and where gravity is weaker, you see high piques, in red and yellow. 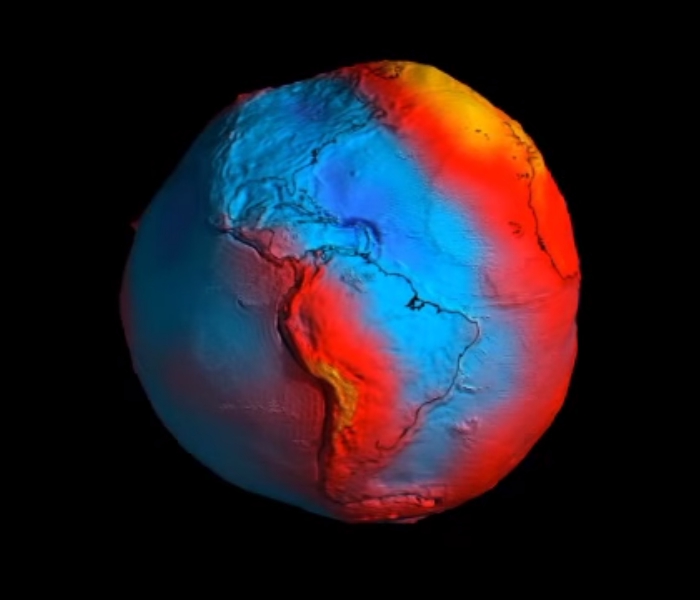 In reality, Earth would never look like the lumpy potato you see in a geoid model. The only way you could ever get our planet to take on such an alien shape is if you did all of the following:

What's more, the model you see in the animation above emphasises the valleys and hills, so that they are 7,000 times higher or deeper than they would look in reality.

Check out the complete geoid on YouTube or below: