Don't Freak Out About That Viral 'Milk Duct' Image, It's Not Actually Correct

A vivid anatomical image of the "female muscle system" and "milk ducts" has been doing the rounds courtesy of a viral tweet, popping up everywhere from Buzzfeed to BBC. But if you're freaking out about this sudden unveiling of the inner world of the human breast, fret no more - the image and its context are not… entirely correct.

The dramatic picture first popped up on the internet in this 2016 Imgur post, but as with most viral content, the poster was not the original author of the pic. It was actually screenshot from this little-known iPad app; and no, that is not the female muscle system: 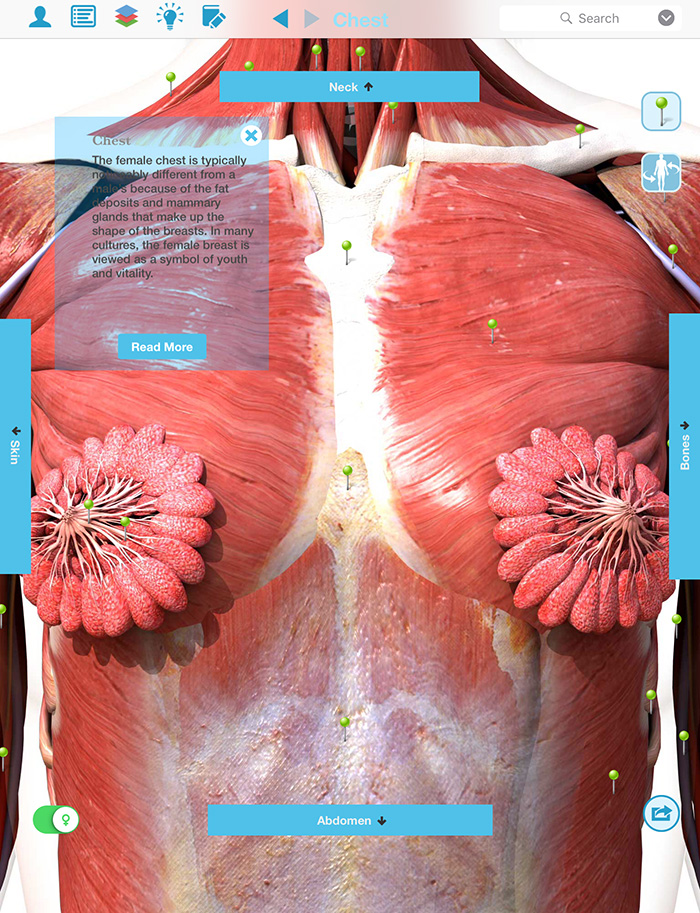 For starters, breasts don't actually contain skeletal muscle. (There are some cells and tissue in there that's sort-of like smooth muscle, but that's not what this diagram claims to be depicting.)

So, what are those petal-like shapes? The app's description vaguely refers to the red blobs as 'the mammary gland', which is pretty unhelpful since the entire boob is actually a mammary gland. 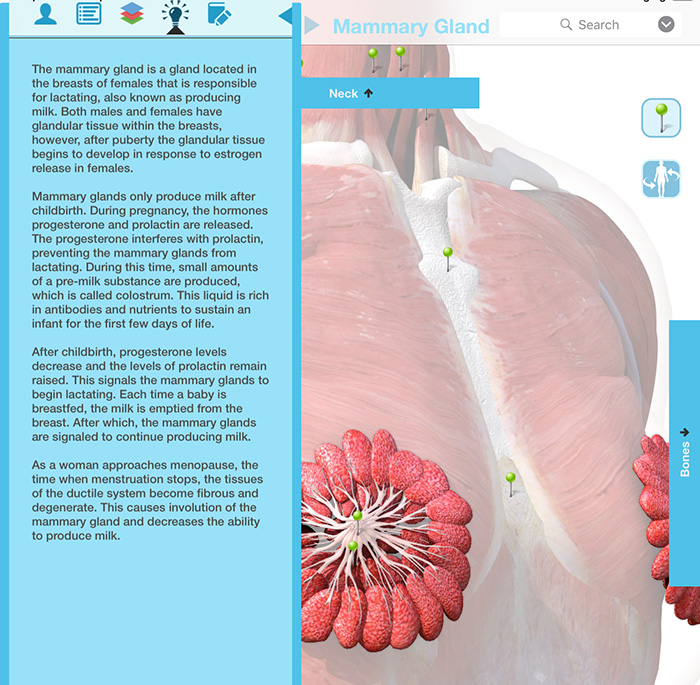 Here's how it's actually structured. Nestled within a hefty dose of fat, breast tissue contains a series of cells responsible for producing milk when the person's hormones signal for it to get ready to feed a newborn.

These cells, called alveoli, cluster into lumps known as lobules, which in turn connect to the nipple via a bunch of lactiferous ducts (or milk ducts), narrow channels that basically direct the milk to the baby's mouthpiece - the nipple.

So, those flower-shaped things are definitely not ducts. They probably represent the lobules, except in a real human breast they are not arranged in such a neat pattern at all.

Many internet users reacted to the picture as some sort of crazy omission from their anatomy lessons at school, although it's likely they were exposed to something more similar to one of these: 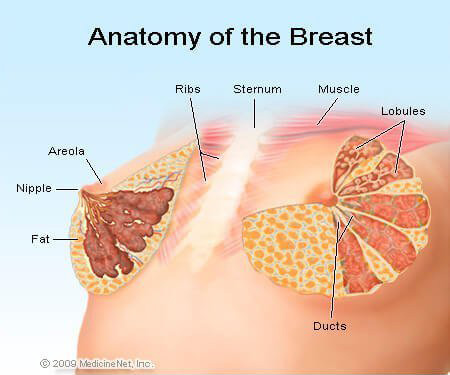 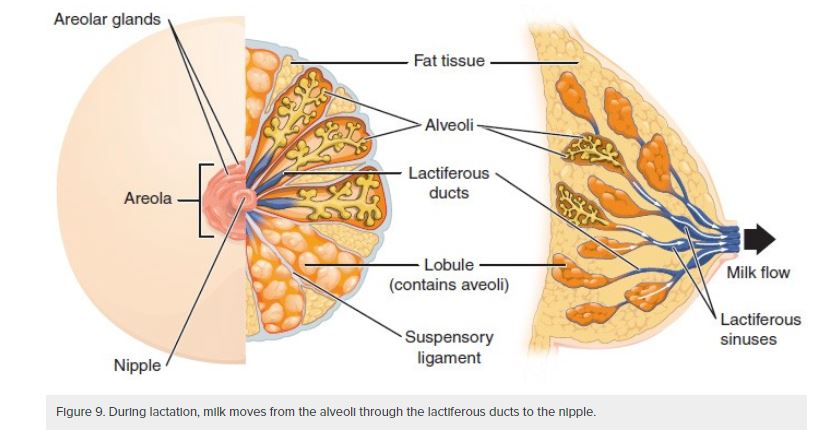 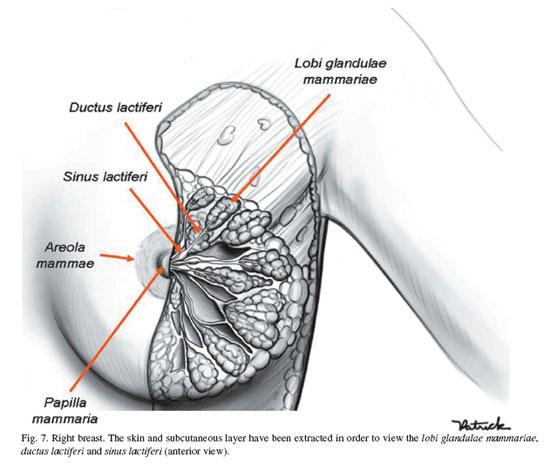 As you can see, the scattering of lobules is rather more varied and messy than the 3D graphic shows. Since the anatomy app is not the work of a reputable medical or educational publisher (in fact, we couldn't find any scientific references in it at all!), it's wise to take its imagery with a grain of salt.

Furthermore, the shape and size of the lobules varies depending on whether the woman is lactating or not - an important detail that's also not specified in the source material, or any of its viral iterations.

Additionally, there is at least one 'debunk' out there that gets it wrong, too. A post on a popular science Facebook page claims "the photo [sic] is based on milk ducts that were retrieved from cadavers in the 1800's, injected with wax, and arranged in a neat circle."

Except the original 1840 image of the wax-injected dissection bears little similarity to the viral 3D rendering: 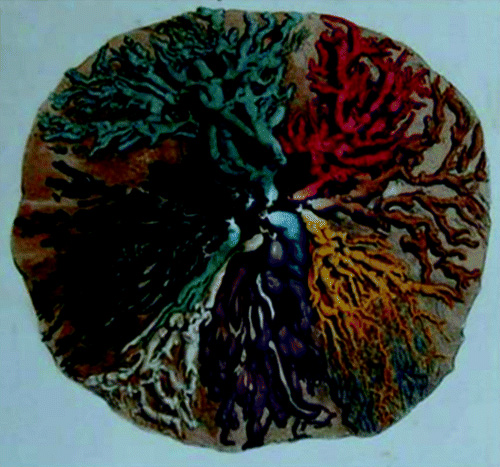 Above: Artist's impression of the lobes of the breast. The ducts were injected with coloured wax prior to dissection (from Cooper, 1840).

(If you want to see more 1840 depictions of both the female and male breast by Sir Astley Paston Cooper, they're freely available here.)

The old anatomist got dragged into this because his work on the lactating female breast has been referenced in modern studies on the topic - a subject tricky to investigate since most medical imaging methods are not recommended to be used in breastfeeding mothers.

A breastfeeding support Facebook page criticising the 3D rendering references this fact, and highlights a 2005 ultrasound study of the lactating female breast tissue as a better representation of what actually goes on inside our mammary glands. 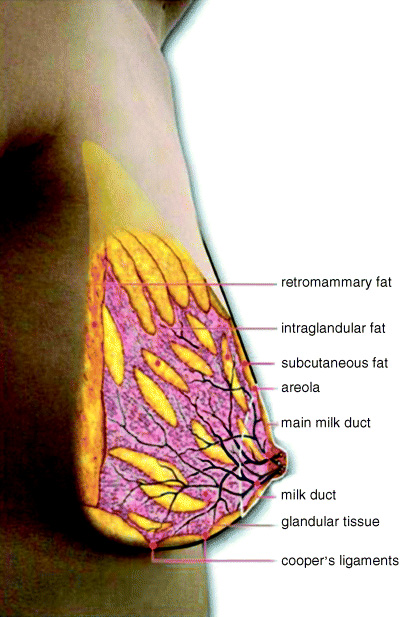 Above: Drawing of the gross anatomy of the lactating breast based on ultrasound observations made of the milk duct system and distribution of different tissues within the breast.

This scientific image is decidedly less creepy, and therefore has infinitely less viral potential - but it's a lot more accurate than the weird flesh flowers freaking out the internet. You're welcome.

Michelle Starr contributed to this report.