Driverless Cars Could Reduce Traffic Fatalities by Up to 90%, Says Report

A new report has analysed the impact of driverless cars on the incidence of fatal traffic accidents, and say that simply by taking human emotions and errors out of the equation, we could reduce deaths on the road by 90 percent. That’s almost 300,000 lives saved each decade in the US, and a saving of US$190 billion each year in healthcare costs associated with accidents.

"By midcentury, the penetration of AVs (autonomous vehicles) and other ADAs (advanced driver-assistance system) could ultimately cause vehicle crashes in the US to fall from second to ninth place in terms of their lethality ranking among accident types," the report, from US consulting firm, McKinsey & Company, concludes.

Back in May, we reported that four of the 48 driverless cars the road in California had been in accidents over the past six months. One in 12 might seem like a lot, but the technology itself wasn’t at fault - it was the humans around it who were messing up.

As Adrienne LaFrance reports for The Atlantic, practical moves to increase road safety in the past have made an incredible impact, with seatbelt laws and airbags reducing the annual death toll from 60,000 in 1970 to a record low of 32,719 in 2013.

With the recent report predicting that driverless car technology could reduce fatalities by 90 percent by the mid-century, that means 29,447 lives could be saved every year, based on the 2013 statistic, she reports. "In the United States alone, that's nearly 300,000 fatalities prevented over the course of a decade, and 1.5 million lives saved in a half-century. For context: Anti-smoking efforts saved 8 million lives in the United States over a 50-year period."

If you expand this to global figures, says LaFrance, driverless cars are set to save 10 million lives per decade. 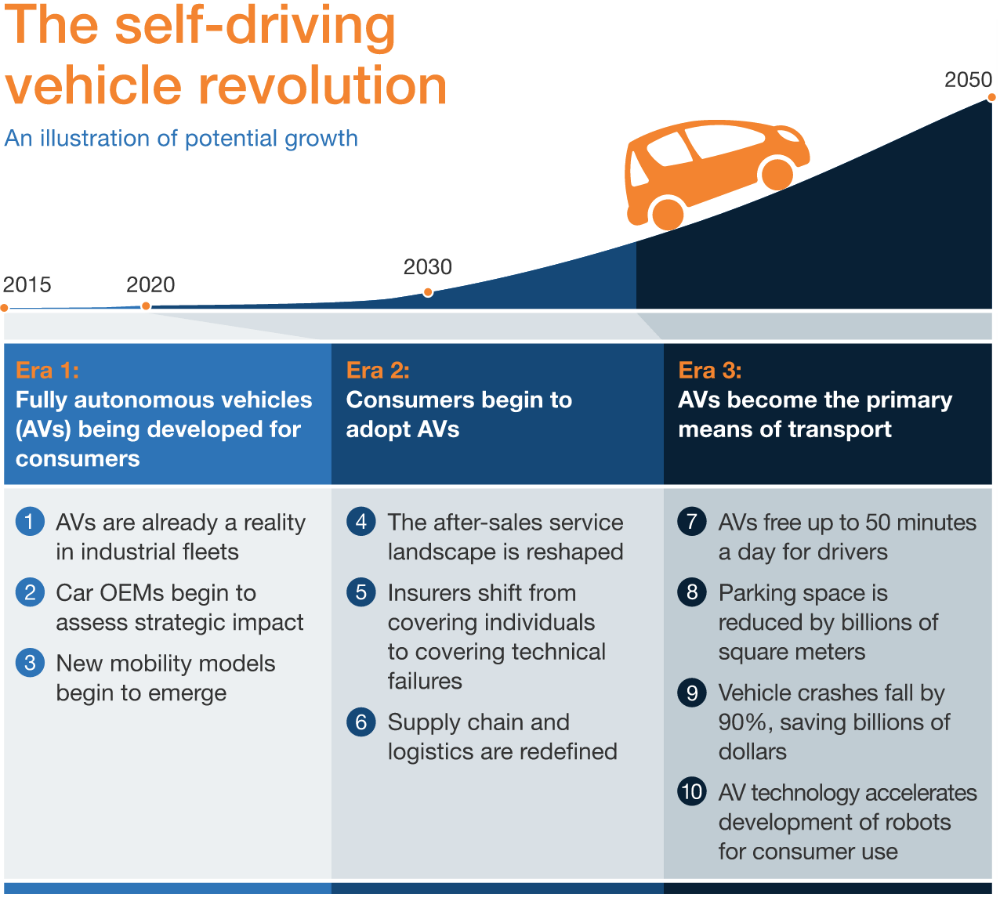 Saving lives isn’t the only thing driverless cars could do once they hit the mainstream. The report estimates that they'll free up as much as 50 minutes per day for users, which adds up to a global figure of 1 billion free hours every single day. (The researchers rather strangely equate this to the time it took to build the Great Pyramid of Giza, but let’s be real here, the only thing we’re likely to do with those 1 billion hours is play more video games.)

The issue of parking will also become a non-issue, with the report estimating that driverless cars will reduce the need for parking space in the US by more than 5.7 billion square metres. "For example, self-parking AVs do not require open-door space for dropping off passengers when parked, allowing them to occupy parking spaces that are 15 percent tighter," it says.

The biggest obstacle in the way of letting driverless cars save us from ourselves? Us. As Peter Dockrill reported for us back in June, a survey of 505 drivers by the University of Michigan’s Transportation Research Institute in the US found that most of them weren't particularly happy about the idea of automated vehicles, "with the largest segment of respondents indicating they’d prefer to retain full control over their vehicles, thank you very much".

The most frequent preference for vehicle automation in the survey responses was for no self-driving capability at all (43.8 percent), with partially self-driving vehicles as the second preference (40.6 percent). Just 15.6 percent of the respondents said they liked the idea of a self-driving car being fully in control.

As Andrew Moore, computer science dean at Carnegie Mellon told LaFrance at The Atlantic, "No one is going to want to realise autonomous driving into the world until there’s proof that it’s much safer, like a factor of 100 safer, than having a human drive."

Google and the rest of the self-driving car peddlers have got one hell of a marketing campaign on their hands.