Last week, San Francisco locals got to see first-hand what life could be like when our roads are filled with driverless cars, and I think we can all agree it looks pretty damn great.

Named the F015 Luxury In Motion - that name is probably the only ill-conceived thing about it - the car was first revealed to the public at the Consumer Electronics Show in Las Vegas last September. Since then, Mercedes-Benz has announced that it’s become one of the first car manufacturers in the world to receive authorisation from the state of California to test self-driving cars on public roads.

The F015 is being billed as a "virtual living room", with seating for up to four people arranged in the back like two sets of couches facing each other. So basically, you could call this thing around after a hard day’s work, hop in, pick the wife up and have a glass of wine on your way home. "And, because its Mercedes, it comes trimmed in walnut veneer, nappa leather, polished aluminium and glass, with soft blue LED lighting,” says Jason Fell at Entrepreneur.

San Fran residents are now getting their first look at the futuristic curiosity, Reddit user 'GoogleplexStar' posting the pic above, commenting, "This driverless Mercedes is cruising around San Francisco, blowing everyone's minds." It was also spotted driving itself around Twin Peaks, near the city’s geographical centre, for a slick photoshoot. It’s not clear whether or not there’s actually someone inside directing it, or if it’s functioning completely autonomously, but either way, it’s a pretty bold statement.

So what would the world be like filled with driverless cars? A recent study from researchers in Sweden into the impact of self-driving cars on traffic and daily commutes suggests that they could actually decrease instances of traffic jams and road congestion significantly.

The report, led by Pierre-Jean Rigole from the KTH Centre for Traffic Research, says that self-driving cars could replace 14 regular cars, so long as people were happy to car pool and allow an average of 15 percent extra commuting time. And on top of that, parking space requirements would drop by 80 percent.

According to David Nield at Digital Trends, the first driverless cars are predicted to hit roads by 2020, but the first iteration will still need some input from a driver. I'm counting down the days. 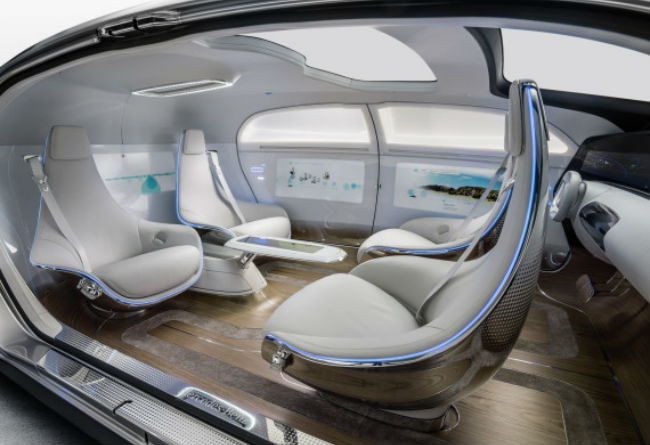