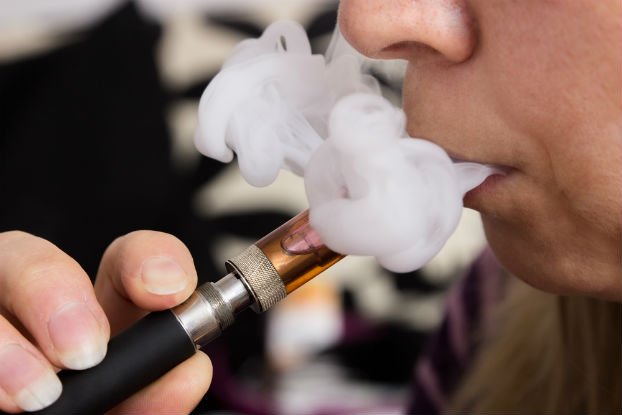 A government-funded study in Japan has revealed that e-cigarettes - electronic devices designed to replace traditional cigarettes - contain high levels of chemicals that have been linked to the development of cancer.

E-cigarettes contain flavoured liquid, which is heated electronically and the resulting vapour inhaled to produce a tobacco flavour without the harmful smoke. According to Justin McCurry at The Guardian, researchers from the Health Ministry of Japan decided to investigate this liquid by testing several brand of e-cigarettes using a machine that inhaled 10 sets of 15 puffs. They discovered that several brands contain the known carcinogens formaldehyde and acetaldehyde.

"One new brand of e-cigarette, whose name has not been made public, showed a more than 10-fold increase in formaldehyde levels in nine out of every 10 sets,” McCurry reports. "The device produced 1,600 micrograms of formaldehyde per 15 puffs."

Another brand also showed similarly high levels, but not as consistently. Other brands showed lower amounts of the carcinogens than regular cigarettes.

"In one brand of e-cigarette the team found more than 10 times the level of carcinogens contained in one regular cigarette. Especially when the... wire (which vaporises the liquid) gets overheated, higher amounts of those harmful substances seemed to be produced,” lead researcher Naoki Kunugita told the AFP. "We need to be aware that some makers are selling such products for dual use (with tobacco) or as a gateway for young people.”

The Guardian reports that since their invention, e-cigarettes have been particularly popular among young people. According to the US Centres for Disease Control and Prevention (CDC):

"More than a quarter of a million youth who had never smoked a cigarette used electronic cigarettes in 2013, according to a CDC study published in the journal Nicotine and Tobacco Research. This number reflects a three-fold increase, from about 79,000 in 2011, to more than 263,000 in 2013.”

Surprisingly, till now, e-cigarettes have enjoyed the status as the ‘less harmful’ alternative to cigarettes, despite the World Health Organisation’s efforts to raise concerns about their effects on foetuses in the womb and young people, and the UN advising they be banned from enclosed public areas. Researchers in Japan have been directed by the government to continue their investigation into the health risks of e-cigarettes.

McCurry does mention that one researcher, Greek cardiologist Konstantinos Farsalinos, who runs an e-cigarette research website, said the unnamed brand that turned up 10 times the amount of carcinogens was “a single extreme case out of the many products he tested", and perhaps the one tested was faulty - something that further research will identify. "Obviously, we have to realise that focusing the discussion on one of the tens of carcinogens present in tobacco cigarette smoke is misleading," he said.

A previous report by the team has been published in the International Journal of Environmental Research and Public Health.

Sources: The Guardian, The Guardian (Sept 2014), MedicalXpress, Centres for Disease Control and Prevention