Border Cave. (A. Kruger/University of the Witwatersrand)
HUMANS

Human Ancestors Made Beds 200,000 Years Ago, And Then Burnt Them

They may not have had fancy mattresses, but the earliest human ancestors were quite capable of putting together a cosy place to sleep. Newly found remains of human bedding in an ancient archaeological site show just how clever they were at doing so.

In the well-known site of Border Cave in South Africa, archaeologists have found evidence that ancient humans were making comfortable grass beds 200,000 years ago.

Not only is this more than 100,000 years earlier than the previous record of deliberate plant-based human bedding - the beds were constructed on layers of ash, that would have protected the sleepers from annoying insects.

"We speculate that laying grass bedding on ash was a deliberate strategy, not only to create a dirt-free, insulated base for the bedding, but also to repel crawling insects," said archaeologist Lyn Wadley of the University of the Witwatersrand in South Africa.

Obviously after 200,000 years, any plant-based material used by humans would be difficult to identify. Organic material degrades over time, which means our record of how early humans used plants is patchy. However, buried deep in the sediments in Border Cave, the archaeologists found the ephemeral remnants of fossilised mats of grass in the living spaces of ancient humans. 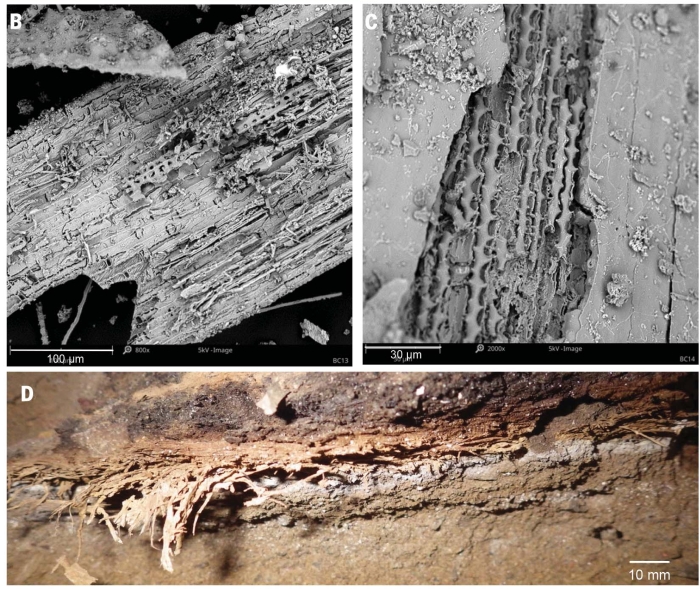 These were all towards the rear of the cave - in the warmest and safest locations, and close to hearths, so close that some of the grasses were singed. Not to worry, though; the team notes that the beds accidentally catching fire was probably infrequent, because most were desiccated, not burnt.

But grass wasn't the only thing they found. There was - as mentioned - ash mixed in, well known as a natural insecticide. It clogs up the spiracles insects use to breathe, abrades their exoskeletons, and eventually dehydrates them.

In addition, camphor bush (Tarchonanthus camphoratus) - used as an insect repellent in South Africa even today - was found on one of the beds.

"Sometimes the ashy foundation of the bedding was a remnant of older grass bedding that had been burned to clean the cave and destroy pests," Wadley said. "On other occasions, wood ash from fireplaces was also used as the clean surface for a new bedding layer."

This is consistent with the previous oldest known bedding, dating back to 77,000 years ago in the Sidubu rock shelter in South Africa. It, too, incorporated aromatic plants with known insecticidal properties, and included ashes.

And there's other evidence of human use in the Border Cave bedding. The beds contained stone chips, as seen in other sides - the by-product of manufacturing stone tools. These could have tumbled out of the sleeper's clothing, but the team believes it more likely that the cave's inhabitants doubled up their beds as a workspace.

Less deliberate are small particles of red and orange ochre. Although these sometimes fall from cave walls, such particles are usually angular. The particles found in the bedding were rounded - suggesting they rubbed off skin or objects when the bedding was used.

Which all paints a rather fascinating picture. From these fossilised beds, we can infer that early humans used ochre for decoration; built their homes around hearths; knew the best spots to bed down; perhaps sometimes used their beds as workbenches; and had figured out how to keep biting insects away.

It not only tells us how our early ancestors lived, it reveals, the researchers wrote, "cognitive, behavioural and social complexity" that we're more accustomed to finding in much younger sites.

"Our research shows that before 200,000 years ago, close to the origin of our species, people could produce fire at will, and they used fire, ash, and medicinal plants to maintain clean, pest-free camps," Wadley said.

"Such strategies would have had health benefits that advantaged these early communities."