Earth Doesn't Actually Have The Most Water in The Solar System

Earth seems drenched with water from mountaintop to ocean bottom.

But our home planet is a desert compared to some places the solar system, both in terms of its total water volume and the amount of liquid on Earth relative to its size.

Consider Jupiter's ice-encrusted moon Europa, which is smaller than Earth's moon. Scientists recently used 20-year-old Voyager data to find even more evidence that Europa has twice as much water as our planet.

Even tiny Pluto may have an ocean nearly as large as Earth's.

Steve Vance, a planetary scientist at NASA's Jet Propulsion Laboratory, has kept a close eye on research about ocean worlds over the years.

He has rounded up estimates of ice thickness and ocean depth throughout the solar system to calculate roughly how much water may exist.

The graphic below uses Vance's data and other sources to show the probable volume of liquid water on nine known ocean worlds, including Earth: 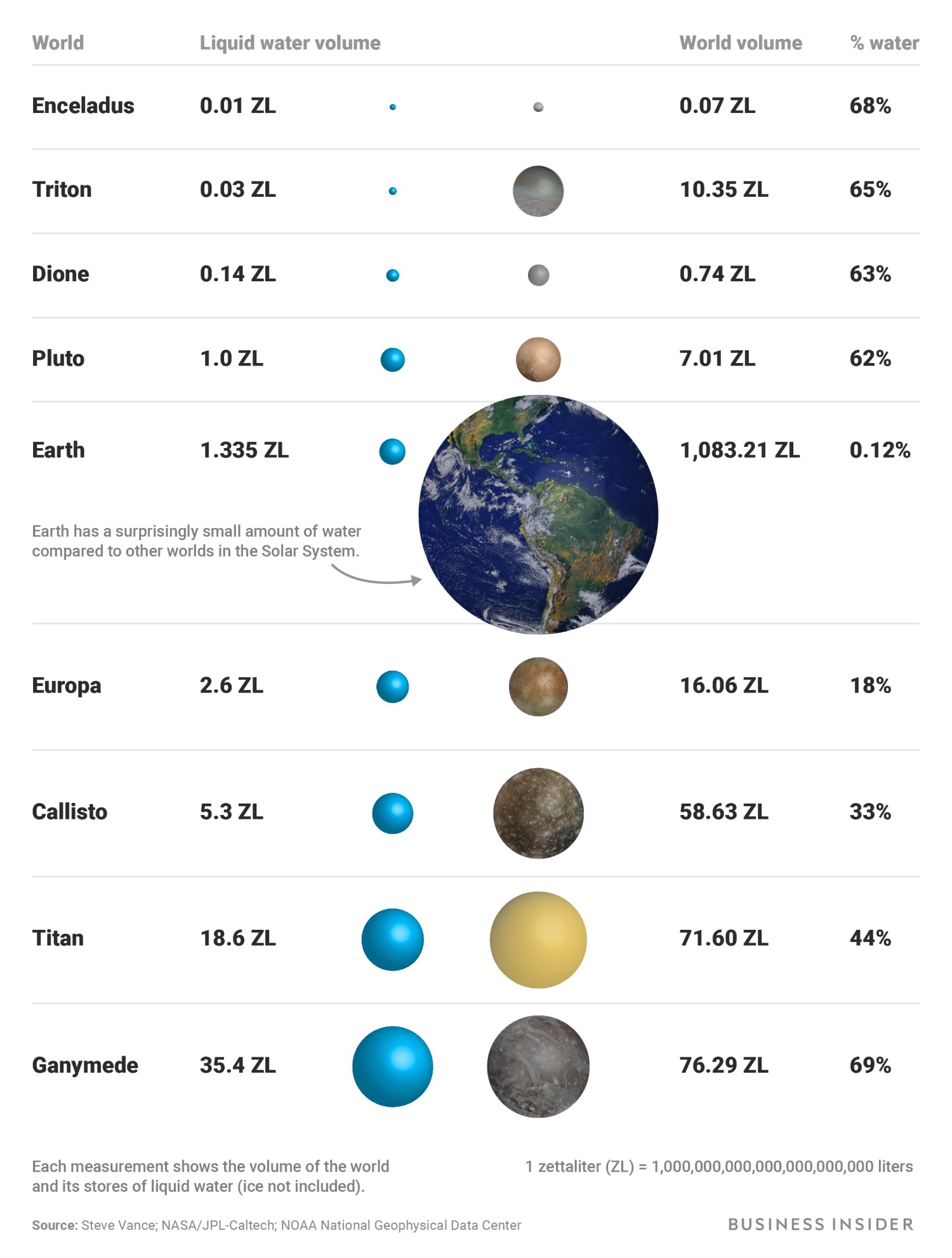 Earth harbours about 1.335 ZL of water, according to the National Oceanic and Atmospheric Administration.

In order of how much liquid water each world is estimated to have (from least to most), the ranking is: Enceladus, Triton, Dione, Pluto, Earth, Europa, Callisto, Titan, and Ganymede.

Ganymede, the largest moon of Jupiter, is the wettest world in the solar system for another big reason: A staggering 69 percent of its total volume may be liquid water, which is more than any other on the list.

Mimas, a moon of Saturn, and Ceres, the largest asteroid in the solar system, might also have oceans. But scientists aren't yet sure how big each one might be, if they exist at all. More space missions are required to find out.

NASA is currently planning a mission to Europa to map the icy moon in unprecedented detail. The Europa Clipper is expected to launch between 2022 and 2025.

The probe will hopefully give us a better estimate of the size of Europa's ocean, and repeatedly "taste and sniff" water plumes spraying from its surface.

The European Space Agency is planning a similar mission called the Jupiter Icy Moons Explorer, which may launch in 2022 and reach Jupiter in 2030.

That mission calls for two flybys of Europa and an 8-month orbit of Ganymede.

One of these robots could discover the first signs of alien life hundreds of millions of miles from Earth.

More from Business Insider:
Trending News
Early Puberty in Girls Surged in The Pandemic, And We May Finally Know Why Health2 days ago
Piles of Trash From Decades of Exploration Could Put Future Missions at Risk Space2 days ago
The Orbit of a Sun-Like Star Reveals The Nearest Black Hole Ever Found Space3 days ago