Echidnas Have Four-Tipped Penises, And Scientists Want to Understand Why

As if Australia's wonderful menagerie of strange beasties wasn't already unique enough - with biofluorescing mammals that lay eggs and sweat milk - the delightful weirdness extends even to their nether regions. Take an echidna's junk, for instance.

I mean, just look at that magnificent four-tipped monstrosity!

"They have to be quite well endowed to get around the spines," Currumbin Wildlife Sanctuary supervisor Sarah Eccleston told the ABC back in 2016.

"Each of the rosettes (heads) do not all produce sperm at once; they use two of the heads at a time to ejaculate sperm." 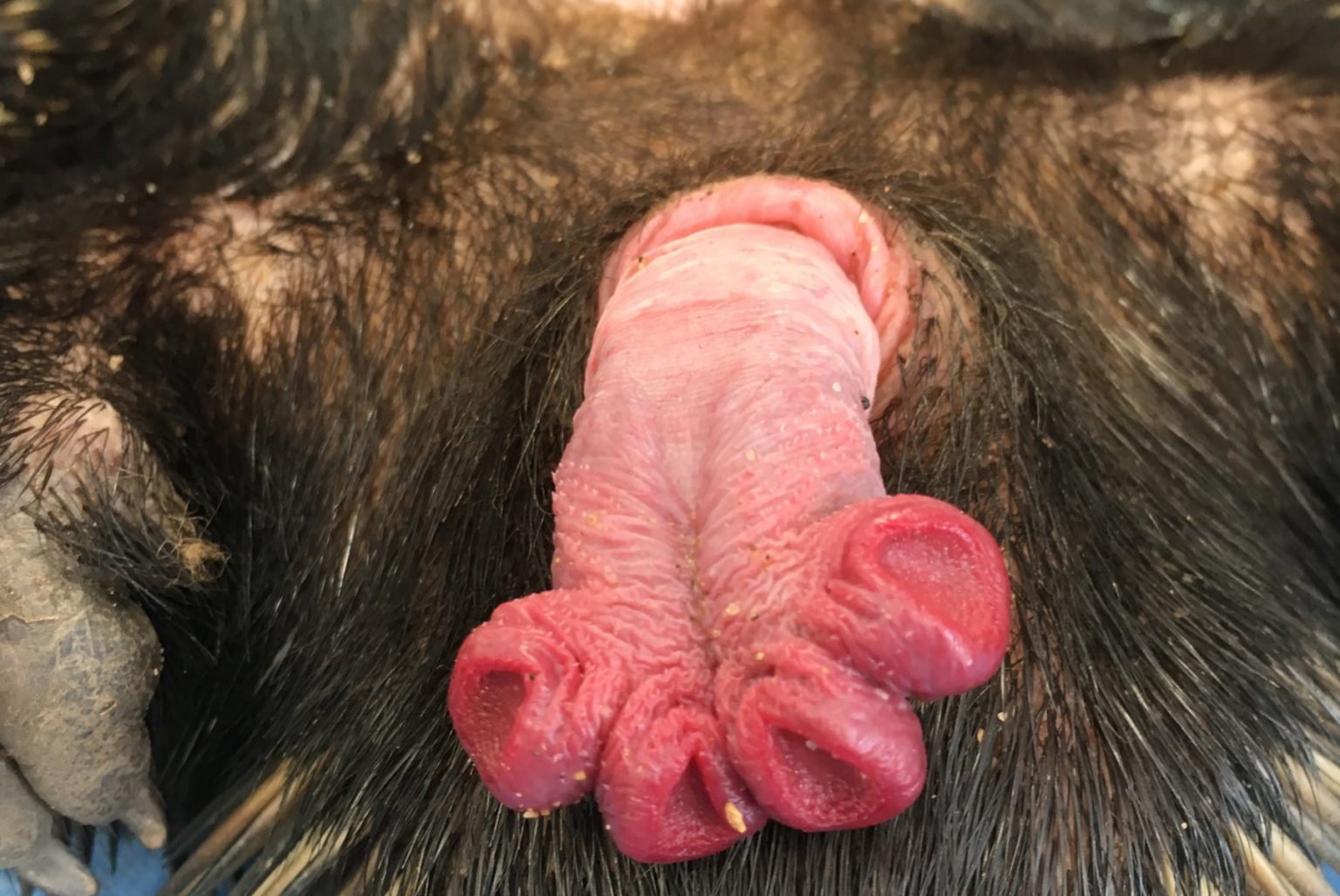 Past research suggested echidnas alternate which of the quartet of penis ends they use each time - odd behavior for a mammal.

"We found internally they act like they have two penises merged together and can use them independently," University of Melbourne developmental biologist Jane Fenelon told ScienceAlert.

Studying injured short-beaked echidnas (Tachyglossus aculeatus) that sadly didn't make it at the Currumbin Wildlife Sanctuary hospital, as well as some tame sanctuary residents, Fenelon and colleagues found that blood flow can be directed towards one side of their penis or the other. This could be how they control which half becomes erect.

Why the animals only use two ends of their penis at a time is still unclear, but the researchers suspect it came about through male competition for females.

"By alternating the use of each side our tame echidna can ejaculate 10 times without significant pause, potentially allowing him to out-mate less efficient males," they wrote in a statement.

As if the animal was trying to be as stubbornly unique as possible, once ejaculated, bundles of up to 100 echidna sperms work together to try to reach an egg and develop into an adorable little puggle.

"In most other species, sperm swim individually and it's every sperm for themselves," the team said.

Just a baby Short-Beaked Echidna, also known as a 'puggle' from @PerthZoo. Along with platypus, echidnas are the only egg-laying mammals in Australia!
More: https://t.co/bye0Usby22 pic.twitter.com/O4acHniHIT

Marsupials like koalas also have multi-pronged penises - but theirs are only forked in two. This is thought to come in handy when trying to get their sperm into the female's twin uteruses.

But such a purpose doesn't seem to explain the echidna's bizarre penis. When it comes to accessing the female's uterus, echidnas are more similar to birds and reptiles than other mammals.

"All echidnas have a cloaca which is the one hole through which urine, poo and egg-laying occurs. They have separate tubes for all of these but they merge close to the exit," explained Fenelon.

"We think the echidna penis is long enough to reach where the uterus branches off though."

4. They are mostly solitary animals, but the rare times they are seen collectively is when they form "an #echidna train". This is when the female is in season and up to 20 males follow her across great distances, all competing for her attention https://t.co/H31UhTs3nY pic.twitter.com/A6Q56ejlhP

The researchers have actually found one precedent for the echidna's strange-shaped penis elsewhere in the animal kingdom.

"The only other animals I could find that's similar to this are some species of turtles," said Fenelon.

"There's some evidence that the penis in all amniotes (birds, reptiles and mammals) has the same evolutionary origin and the monotremes are a missing part of that puzzle."

This makes sense given that echidnas and the only other monotremes that still survive today (platypus) share a strange mix of mammalian, bird, and reptilian genetics. Monotremes parted ways with the rest of us mammals 187 million years ago.

"We do know that they only use their penis for mating, not urine," Fenelon told Australian Geographic. "Because they don't need it for urine, they had the freedom to make it much more elaborate and this is something you see in other species that only use it for mating." 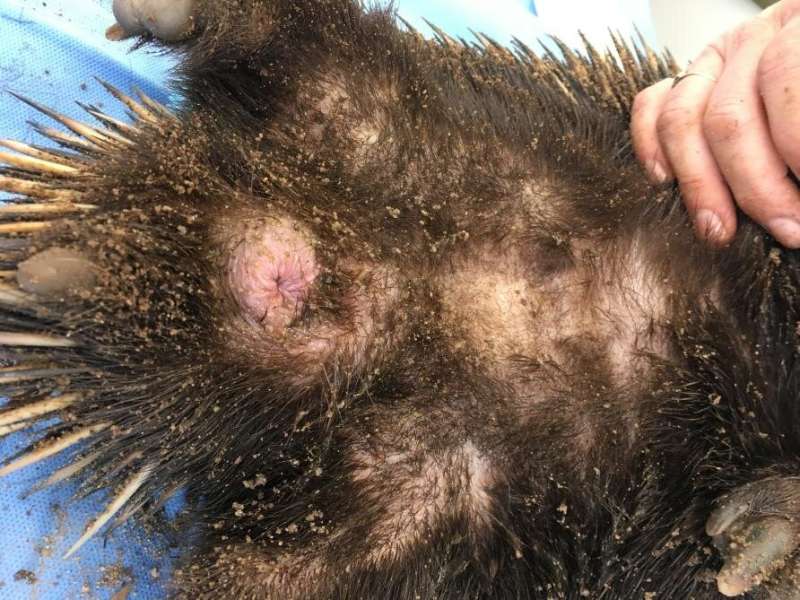 Echidnas store their penises internally when not in use. (Jane Fenelon)

Most of the time, male echidnas keep their flamboyant bulge tucked neatly away within their bodies. This allows their reproductive appendage to stay safe and clean while they're busy shoveling massive amounts of dirt with blade-clawed paws, foraging for ants and termites.

Like too many of Australia's wildlife, these unique animals are under threat largely from habitat destruction, which is concerning given the massive ecosystem service they provide with their soil mixing habits - improving soil health, promoting plant growth, and trapping carbon.

Luckily, for now Australia's echidnas are still widespread; but Papua New Guinea's three long-beaked echidna species are endangered, so further insights into their reproductive system could help with their conservation.

This research was published in Sexual Development.