From our single vantage point in the cosmos, it's really hard to understand three-dimensional space.

We can easily map stars into constellations in relation to each other, but knowing which are closer and which are further away is a lot harder to measure.

One way to determine the distance to objects in space is by using standard candles - objects of known intrinsic brightness. Astronomers measure the difference between how bright the object actually is, and how bright it appears to us light-years away, and use that difference to calculate how far the light has travelled.

These candles include pulsing stars whose intrinsic brightness is linked to the timing of their pulses, and supernovae with a limited peak brightness range.

Now, astronomers have demonstrated the viability of what seems to be the most unlikely tool in the Universe for this set - supermassive black holes. Or, at least, the echoes of them.

"Measuring cosmic distances is a fundamental challenge in astronomy, so the possibility of having an extra trick up one's sleeve is very exciting," said astronomer Yue Shen of the University of Illinois at Urbana-Champaign.

You may be feeling a bit of puzzlement here. While it's true that we know (more or less) how bright black holes are, that's of no help whatsoever - because they're, well, the opposite of bright.

They give off no discernible radiation at all; they're effectively invisible.

There are as many as a billion stellar-mass black holes in the Milky Way; we've only identified a few handfuls.

Supermassive black holes that reside in the hearts of galaxies, however, are a very different kettle of fish.

No, we still can't see them; but if they're active, the material around them shines very brightly indeed. And it's the way light behaves in this immediate environment can be used to work out its intrinsic brightness.

Around this swirls a disc of material, gravitationally siphoning into the black hole, a bit like water circling and falling into a drain. This is the accretion disc, and the intense gravitational and frictional forces therein heat the material and cause it to glow brightly. But that's not what astronomers have measured. 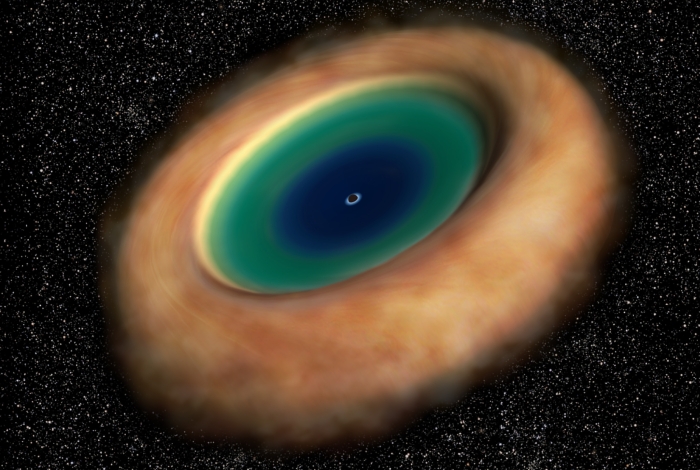 Outside the accretion disc is a larger cloud, a doughnut-shaped ring of dust called the torus. The whole structure is put together like the illustration above. It's that outer torus that is the key to a technique known as echo mapping, or reverberation mapping.

Every now and again, the region of the accretion disc closest to an active supermassive black hole flares brightly in mostly optical and ultraviolet wavelengths - and when it reaches the torus, it "echoes".

The optical and ultraviolet light is absorbed by the dusty cloud, which heats and emits that thermal energy as mid-infrared light.

Accretion discs can be huge; it can take years for the light to reach the torus and be re-emitted. But since we know the speed of light, astronomers can use the time between the flare and the echo to calculate the distance between the inner edge of the accretion disc and the torus.

This is where it gets really clever. We know the inner edge of the accretion disc is insanely hot. And we know that the disc grows cooler as we move outwards from the black hole.

When the temperature drops to around 1,200 degrees Celsius (2,200 degrees Fahrenheit), that's when dust clouds can form.

So, the distance between the torus and the inner edge of the accretion disc is directly proportional to that insanely hot temperature.

Well, obviously it's not as simple as "boom". You need to be watching a black hole very carefully over long timeframes to detect the optical/ultraviolet flash and mid-infrared echo.

A team of astronomers led by Qian Yang of the University of Illinois at Urbana-Champaign combed nearly two decades' worth of data collected by ground-based optical telescopes to look for the optical flash.

Then they studied data collected between 2010 and 2019 by NASA's Near Earth Object Wide Field Infrared Survey Explorer looking for corresponding infrared flares.

They identified 587 supermassive black holes with an optical flash and a mid-infrared echo - the largest single survey of its kind.

And although there is still room to refine the data - the infrared surveys didn't span the full infrared range, which means there's a fair amount of uncertainty in the distance calculations - they did confirm that the R-L relation scales, and that the echo behaves the same way across supermassive black holes of all the sizes in their sample.

The work to refine the measurements will be ongoing.

The team is working on improving their models to better constrain the behaviour of the dust, and how it emits infrared light. And, of course, ongoing surveys with better technology will continue to provide higher quality observations.

"The beauty of the echo mapping technique is that these supermassive black holes aren't going away anytime soon," Yang said. "So we can measure the dust echoes over and over again for the same system to improve the distance measurement."