We Finally Know What Elements Are Contained in an Exploded Supernova

NASA's Chandra X-Ray Observatory has been taking a long, hard look at one of the Milky Way's most famous and studied objects - the remnant of an exploded star, Cassiopeia A. And it's revealed the location of the elements left behind in the star's remains.

By isolating the X-rays produced by the elements silicon, sulphur, calcium and iron, as well as the explosion's blast wave, researchers have been able to figure out where those elements can be found in the supernova's 3D structure, how much of them there are, and how far they've been blasted into space.

Cassiopeia A, located some 11,000 light-years away inside the Milky Way Galaxy in the northern constellation of Cassiopeia, is a unique and fabulous object for study. This is because it only exploded very recently (in cosmic time) - probably in around the year 1680 CE.

Because it's so close and so new, it can help us figure out how stars help produce and spread common elements throughout the Universe, as well as provide clues as to what really happens when a star explodes. 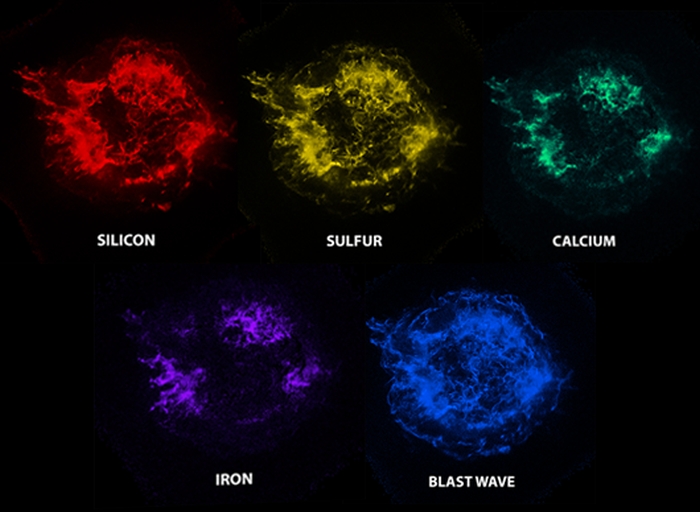 Previous research has also found nitrogen, carbon, hydrogen and phosphorus. Combined with oxygen and the elements Chandra has isolated, all the elements needed to make DNA are being blasted into space in Cassiopeia A.

Inside the remnant is a neutron star, the remains of the star that exploded in the 17th century. It would have started out much bigger, a red supergiant about 16 times the mass of the Sun, astronomers estimate.

As nucleosynthesis fused lighter elements into heavier ones,  radiation pressure was no longer sufficient to keep the star's outer layer intact. Stellar winds ejected the giant's outer material, leaving behind a star only about five times the mass of the Sun.

The remainder of the star then collapsed under the massive gravitational pull of the core, sending a shockwave and masses of material out into the surrounding space.

It will keep expanding for thousands of years to come.