Every 200 Years, California Endures a Flood of Epic Proportions - And This Could Be It

Record-breaking rains in California have brought on its wettest winter in decades, with rainfall hitting almost 200 percent above average in certain parts, and drought-affected areas in the state dropping by 22 percent in a single week.

And while it looks bad right now, experts are predicting that this might just be the beginning - the historical record indicates that California endures widespread flooding every 100 to 200 years, and based on the state's last 'mega flood', this could be it.

"Geologic evidence shows that truly massive floods, caused by rainfall alone, have occurred in California about every 200 years. The most recent was in 1861, and it bankrupted the state," US Geological Survey hydrologist, Michael D. Dettingeris, and paleoclimatologist B. Lynn Ingram from the University of California, Berkeley wrote in a 2013 Scientific American report.

"It has now been 150 years since that calamity, so it appears that California may be due for another episode soon."

If you're not familiar with the Great Flood of 1862, it was the largest flood in the recorded history of Oregon, Nevada, and California, and lasted from December 1861 to January 1862.

The event, which put Sacramento underwater for six months, was preceded by weeks of unusually high rain and snowfall, and then in mid-January, record-breaking rains melted the high-elevation snow, and triggered a flood that would turn the Central Valley into an inland sea. 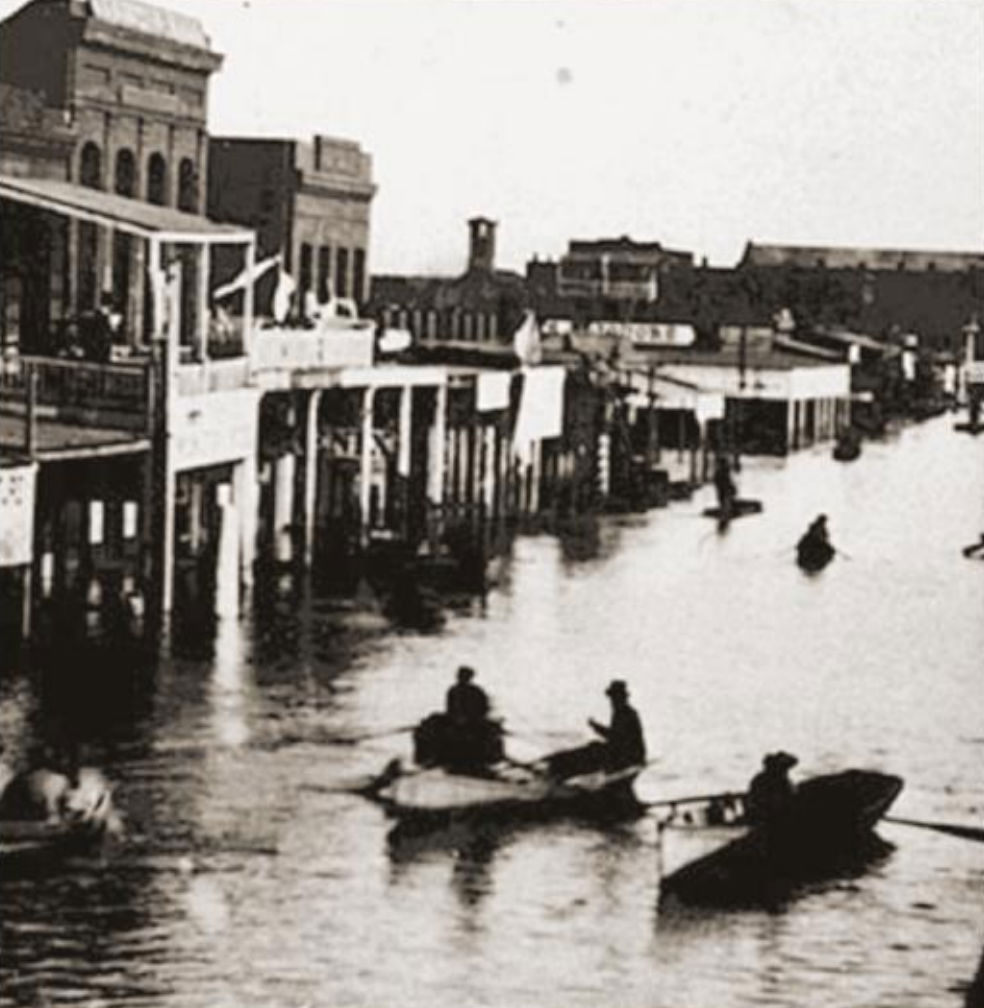 Fast-forward to today, and while California might be soaked, it's not in 'mega flood' territory yet, but the signs are there that something big could be on its way.

Not only are winds extreme and rainfall unusually high, thanks to an onslaught of natural phenomena known as atmospheric rivers, but the snowpack in the Sierra Nevada is 173 percent above average right now - the highest it's been 22 years.

And the most recent bout of storms in Northern California have left at least eight people dead, and hundreds evacuated.

"Climate scientists now hypothesise that these floods, and others like them in several regions of the world, were caused by atmospheric rivers - a phenomenon you may have never heard of," say Dettingeris and Ingram.

"And they think California, at least, is overdue for another one."

If you're not familiar with atmospheric rivers, think of them like vast 'rivers in the sky' - narrow corridors of concentrated moisture suspended in the atmosphere, holding up to 15 times more water than the amount that flows through the Mississippi River.

This week, scientists led by Duane Waliser from NASA's Jet Propulsion Laboratory published a study identifying atmospheric rivers as the cause of up to 65 percent of all extreme rain and snow events in the Western United States, and 80 percent of major floods in California.

And this winter alone, there have been at least 10 atmospheric rivers - if not more - in the state, whereas an average year will usually only have five to seven at most.

Even before the signs were there, scientists had predicted that California was due for "the next big one" -  a team from the US Geological Survey came up with a simulation called the ARkStorm back in 2011 to help us predict what kind of damage a similar-sized flood could cause today.

According to the model, which was informed by 117 scientists, engineers, lifeline operators, emergency planners, and members from private and public sectors, the next mega flood would turn the Central Valley into a massive body of water 300 miles long and 20 miles wide (482 km long and 32 km wide).

Windspeeds in some places would hit 125 miles per hour (201 km/h), and overall the cost of the damage - including evacuating millions of residents, plus the loss and damage to properties - is estimated at US$725 billion, which is nearly 3 times the estimated cost of the next big earthquake California is also overdue for.

So how can researchers be so sure about this 100, 200-year cycle of mega floods?

As part of their ARkStorm analysis, the US Geological Survey team looked at the last 2,000 years of geological history in California and the Western United States to figure out the frequency of past floods.

They found that the 1861-62 series of storms were the longest and most severe in the California historic record, but were probably not the worst the state has experienced - geological evidence indicates that several floods that occurred before Europeans arrived were actually bigger.

"Scientists looking at the thickness of sediment layers collected offshore in the Santa Barbara and San Francisco Bay areas have found geologic evidence of megastorms that occurred in the years 212, 440, 603, 1029, 1418, and 1605, coinciding with climatological events that were happening elsewhere in the world.

There is no scientific evidence to suggest that such extreme storms could not happen again."

The team also found that California's flood-protection system is typically only designed to resist 100- to 200-year runoffs, which means it's not designed to handle a massive deluge at those intervals - something that's becoming all too clear after the recent Oroville dam crisis.

Based on the evidence, the next California mega flood is more likely a case of when, not if, and all the state can really do is make sure it's prepared.

"Californians, as well as people all along the West Coast, should be aware of the threats posed by atmospheric rivers, and should take forecasts of storms and floods very seriously," say Dettingeris and Ingram.

"Planners and city and state leaders should also take note as they decide on investments for the future. He who forgets the past is likely to repeat it."