Every World in a Grain of Sand: John Nash’s Astonishing Geometry

This article was written by Daniel Mathews from Monash University in Australia. The article was originally published by The Conversation.

As has been widely reported, John Forbes Nash Jr died tragically in a car accident on May 23 of this year. Many tributes have been paid to this great mathematician, who was made famous by Sylvia Nasar’s biography A Beautiful Mind and the subsequent movie based on that book.

But perhaps Nash’s most spectacular results were in geometry. To honour Nash’s life, I would like to try to give a flavour of some of this work.

A great deal of Nash’s work was in the field of geometry. But this kind of geometry - differential geometry - is very different from the geometry learned at high school. It is not about trigonometry or Pythagoras, as found in secondary maths textbooks. Rather, it is about topics like surfaces, curvature and smoothness.

Like all pure mathematicians, Nash proved theorems: logical statements that are rigorous, precise and absolutely true, with no tolerance for vagueness. The world of pure mathematics is austere and often abstruse, but its claims to truth are eternal and absolute.

Well, that’s the theory at least. Breakthroughs in pure mathematics are often at the very limits of human understanding. It takes time, even for those in the field, to fully comprehend new developments.

Nash’s work was an extreme case. His papers could be chaotically presented, hard to follow and his approaches to problems were often unlike anything that had come before him, bamboozling students and experts alike. But he was almost otherworldly in his creativity.

While mathematical arguments are tightly constrained by the rigorous requirements of logic, Nash’s constructions and methods were wild. And nowhere was this more so than in his work on geometry.

Take a flat sheet of paper. You can bend it, but without ripping it or creasing it, what shapes can you make? You can’t make a sphere, or even a section of a sphere, because a sphere is curved, while the paper is flat.

But you can make a cylinder. And even a cone, as you’ll know if you’ve ever seen a dunce’s hat. (This fact is also useful for making waffle cones, as shown below.)

As it turns out, even though a cylinder or a cone looks curved, it is intrinsically flat. In an undergraduate course on differential geometry (such as the one I teach at Monash), one studies this intrinsic curvature, and it turns out that there are lots of flat surfaces. These ideas were around for hundreds of years before Nash, but Nash took them much further.

Nash took up the idea of 'embedding' a surface: placing it into space without tearing, creasing or crossing itself. An embedding which does not distort the surface’s intrinsic geometry is 'isometric'. In other words, the surfaces above are 'isometric embeddings' of the plane into 3-dimensional space.

The isometric embedding question can be asked not just for the plane, but for any possible surface: spheres, donuts (which mathematicians call tori to try to sound respectable) and many others.

Nash proved that you can always embed a manifold into space of some dimension, without distorting its geometry. With this momentous result, he solved the isometric embedding problem.

Nash’s proof of the isometric embedding problem came as a complete surprise to much of the mathematical community. His methods were revolutionary. The great mathematician Mikhail Gromov said that Nash’s work on the embedding problem struck him to be “as convincing as lifting oneself by the hair”. But after great effort, Gromov finally understood Nash’s proof: at the end of Nash’s lengthy argument, Gromov said, Nash “miraculously, did lift you in the air by the hair”!

Gromov went on to develop his own ideas, inspired by Nash’s work. He wrote a book - similarly renowned among mathematicians for its incomprehensibility, just like Nash’s work - in which he developed a method called 'convex integration'.

Gromov’s method had several advantages. One is that it is easier to draw pictures of an embedding made with his convex integration method. Prior to Gromov, we knew isometric embeddings existed, and had wonderful properties, but had a very tough time trying to visualise them, not least because they were often in higher dimensions.

In 2012, a team of French mathematicians produced computer graphics of isometric embeddings using Gromov’s convex integration methods. They are extremely intricate, almost fractal-like, yet smooth. Some are shown below.

The world in a grain of sand

Nash’s work on the isometric embedding problem has many facets and has led to huge amounts of subsequent research.

One particularly amazing aspect is how isometric embeddings are constructed. Nash’s work, combined with subsequent work by Nicolaas Kuiper, showed that if you wanted to isometrically embed a surface in 3-dimensional space, it’s enough to be able to shrink it.

This sounds ridiculous. For instance, take a sphere - say the surface of a tennis ball - and imagine shrinking it down to have a nanometre radius. Nash and Kuiper show that by 'ruffling' the surface sufficiently (but always smoothly; no creasing or folding or ripping or tearing allowed!) you can have an isometric copy of your original tennis ball, all contained within this nanometre radius. This type of 'ruffling' of the surface was reproduced in the French team’s computer graphics.

The French team considered taking a flat square piece of paper. Glue the top side to the bottom side, to get a cylinder. Now glue the left side to the right side. If you think about it, you might be able to see that you get a donut. But you’ll find the paper is now creased or distorted.

Can you embed it into 3-dimensional space without distortion? Nash and Kuiper say “yes”. Gromov says “use convex integration”. And the French mathematicians say “this is what it looks like”! 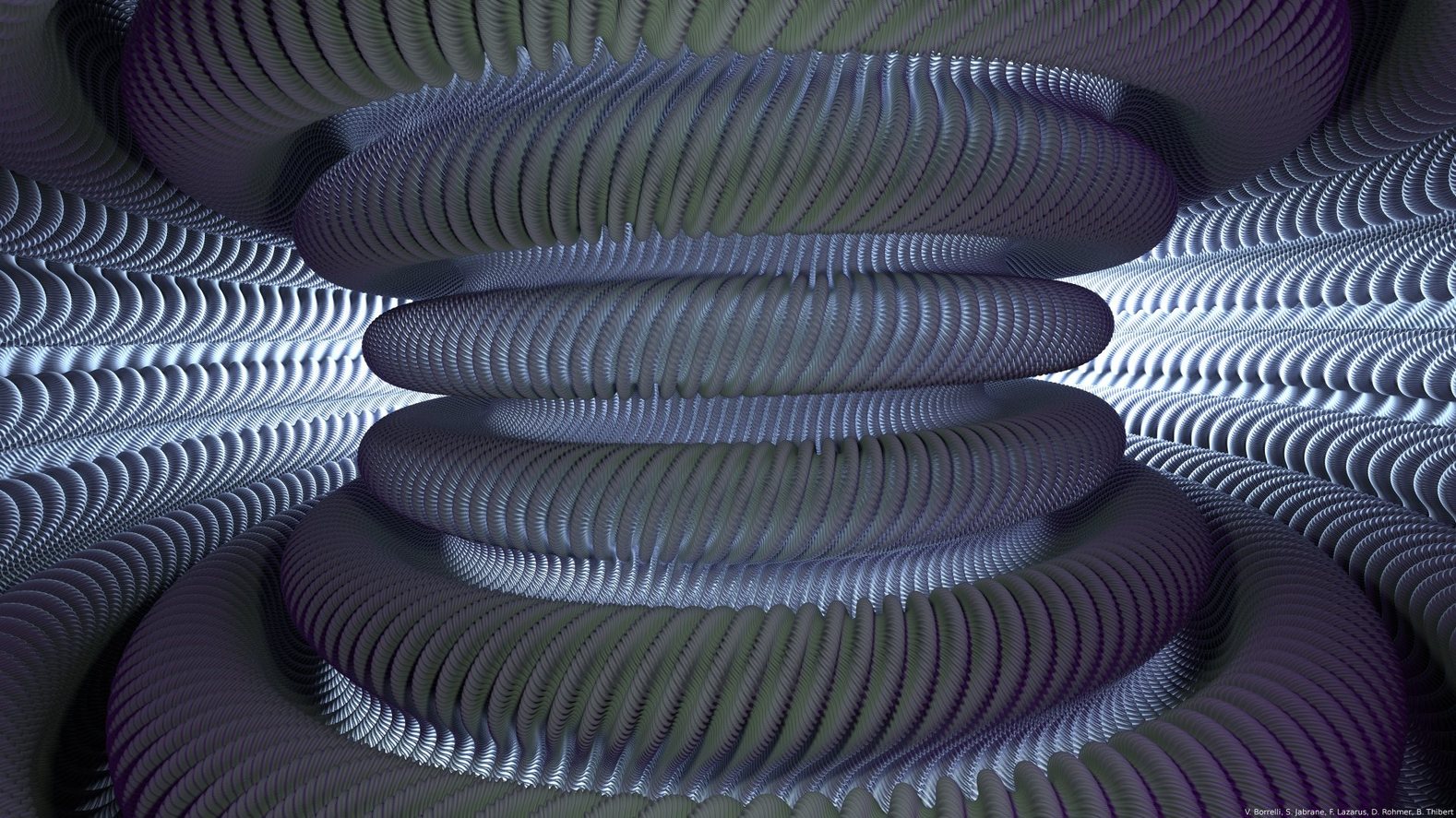 But the mathematical theorem doesn’t just apply to tennis balls or donuts: the theorem holds for any manifold of any dimension. Any world can be contained in a grain of sand.

How did he do it?

Nash had a rare combination of genius and hard work. In her biography of Nash, Sylvia Nasar details his formidable intensity and effort spent working on the problem.

As is well known from the movie, Nash came to believe in outlandish conspiracy theories involving aliens and supernatural beings, as a result of his schizophrenia. When later asked why he, an extremely intelligent scientist, could believe in such things, he said those ideas “came to me the same way that my mathematical ideas did. So I took them seriously”.

And frankly, if my head told me ideas as accurate and as insightful as those needed to prove the isometric embedding theorem, I’d likely trust it on aliens and the supernatural too.

Daniel Mathews is Lecturer in Mathematics at Monash University.