An exceptionally rare and critically endangered fungus, known as the tea-tree fingers, is rapidly losing its grip on the Australian mainland.

Just off the coast, however, its finger-like tendrils are still clinging to life. On French Island, several kilometers from the Mornington Peninsula in the country's southeast, scientists and volunteers have now discovered the largest refuge of tea-tree fingers (Hypocreopsis amplectens) to date.

Surrounded on all sides by water, this small slice of protected bush – once the hunting ground of the Boonwurrung people – is home to what could be over one hundred fruiting bodies, more than every known individual fungus on the mainland combined.

"The discovery of protected areas of tea-tree finger's habitat on French Island greatly improves the prospect of the species' survival into the future," says ecologist Sapphire McMullan-Fisher from the Royal Botanic Gardens Melbourne.

"This discovery also raises interesting questions about the dispersal mechanisms for tea-tree fingers, including how it traversed a 2- to 5-kilometer (1- to 3-mile) stretch of ocean." 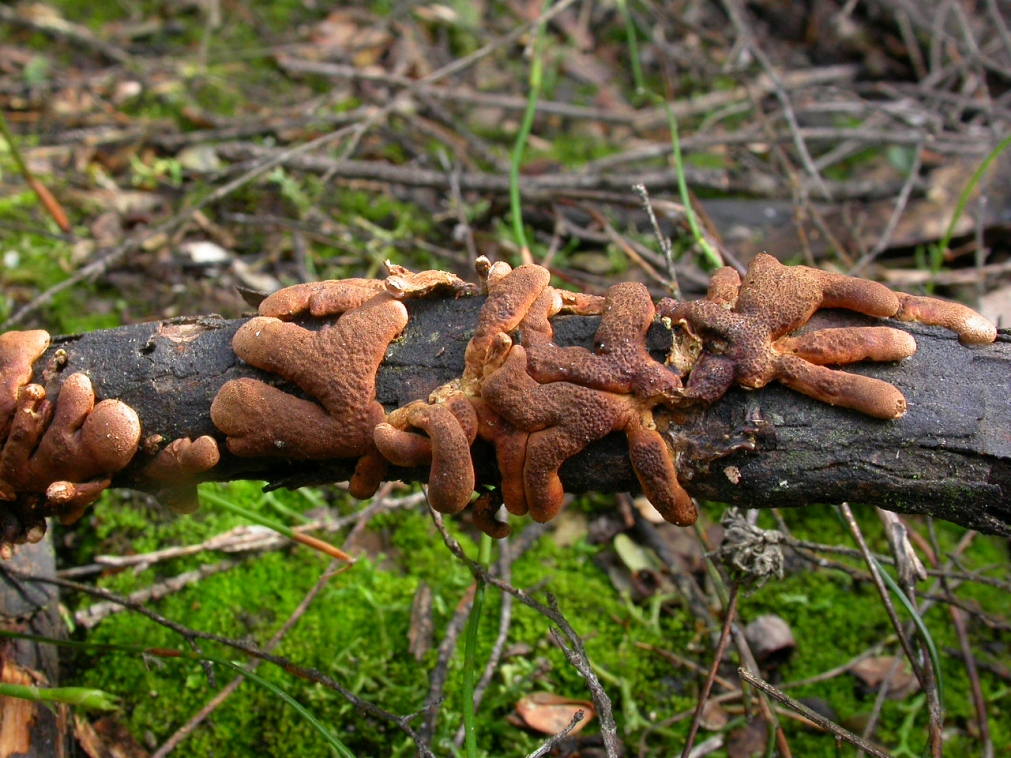 Despite intense surveys to locate tea-tree fingers on the mainland, only four known locations in the state of Victoria have been found since the fungus was first chanced upon by modern scientists in the early 1990s.

The rare species likes to make its home on freshly fallen wood, wrapping its finger-like projections around branches and bark that have not been burnt in 30 years or more.

The species is a suspected fungal parasite, which means even if its spores find a perfect branch on which to reside, it also needs a host to be present for food, specifically a fungus from the Hymenochaete family, which can decompose and eat wood in ways that tea-tree fingers cannot.

Increasing bushfires and human interference on the mainland have unfortunately destroyed many of these substrates, putting the future of the tea-tree fingers at great risk.

What's more, the spores from this macrofungus are thin-walled and vulnerable to heat and fire. This means even when individual bodies are wiped out by flames, they are unlikely to reproduce elsewhere.

All of these factors make this species especially vulnerable to climate change, which is likely to increase the intensity and frequency of bushfires in the coming years.

Invasive species and changes in human land use are also reducing the native vegetation on which this fungus resides, such as tea trees, scented paperbark trees, and silver banksias. Australia is one of the world leaders in deforestation, the only developed nation with such high levels of land clearing.

"Three out of four mainland sites have uncertain futures as they are adjacent to sand mines," explains ecologist Michael Amor, also from the Royal Botanic Gardens Melbourne.

"The relatively high abundance of tea-tree fingers on French Island may reflect the undisturbed nature of this comparatively pristine area and could offer insight into the historical state of mainland populations – that is, before human-driven disturbance and habitat loss."

In Australia, like elsewhere in the world, fungi have been historically overlooked by conservationists, despite the crucial, connective role it plays in our ecosystems, especially when it comes to decomposition and nutrient cycling.

In 1999, Australia's Environmental Protection and Biodiversity Conservation Act did not list even a single species of fungi in need of protection. At the time, two species of fungi were actually listed as threats.

Since then, we've learned a lot more about these organisms. In 2013, the International Union for the Conservation of Nature (IUCN) created a special Fungi Red List to track which fungi were struggling and why.

Many Australian species are on this list, including the rarest of them all: the stemless earpick (Auriscalpium sp. 'Blackwood'). For many years this species of fungus was found on only one tree in Victoria. Last year, it popped up on a second tree.

In comparison, there are far more individual tea-tree fingers out there in the Australian bush, but according to the IUCN Fungi Red List, they are still considered critically endangered. French Island could be their last hope.