There's something viscerally satisfying about bursting a juicy pimple, even though science recommends that you really shouldn't… but there's a wrong way and, as it turns out, a much more wrong way: cutting it off with a woodworking tool.

This is what a 23-year-old man did when he thought he had a zit - and he ended up with a rare fungal infection that spread across his entire lip. We've included a picture below and it's not pretty, so consider yourselves warned before scrolling down.

According to a case report in the Journal of Emergency Medicine, the construction worker rocked up to see a doctor with a really painful lesion under his bottom lip that had been slowly growing over the course of seven months.

The doctors described it as "a large, heme-crusted, verrucous, erythematous plaque with a rolled, indurated border on the lower vermillion and cutaneous lips," and that does not sound like something you want growing on you.

However, he wasn't presenting with any other symptoms - no headaches, chills, fever, malaise, weight loss, and his lab workup and chest radiograph showed nothing.

He had, he told the doctors at John H. Stroger Jr. Hospital of Cook County in Chicago, used a "woodworking blade" to cut off a pimple before the lesion started growing. 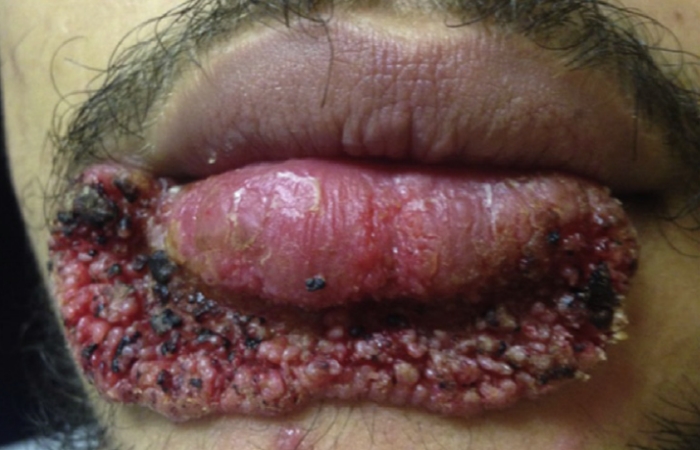 A skin biopsy revealed the answer: spores of a fungus called Blastomyces dermatitidis, which is responsible for a fungal infection called blastomycosis.

Blastomyces is usually found in the soil and wet, decaying wood around rivers and streams. People (and other animals, especially dogs) usually become infected when they breathe the spores - it presents as a lung infection in about 70 percent of patients.

According to the CDC, only about half the patients that are infected will show any symptoms at all, and they are usually flu-like - fever, cough, weight loss, night sweats, muscle and joint aches, and fatigue.

But, although it's rare, it is possible for the spores to enter the human body through a wound in the skin.

To date, the doctors said, only 50 cases of contracting blastomycosis in this manner - cutaneous blastomycosis - have ever been described in literature, and it usually occurs in morgue workers, or dog handlers bitten by an infected animal.

Once on the skin, it usually stays there, and doesn't end up in the lungs - therefore not presenting with the flu-like symptoms of the pulmonary version of the infection.

Never before has cutaneous blastomycosis been described as inflicted by a woodworking blade, but it's not impossible - in fact it's quite likely - that the tool had dirt on it before the patient made his really ill-advised attempt at home surgery.

It's relatively easy to treat, but slow. The doctors noted in the case study that for mild to moderate blastomycosis, treatment is a 6- to 12-month course of antifungal medication.

This was prescribed to the patient and after a fortnight he showed considerable improvement. However, "he was subsequently lost to follow-up" according to the case study.

Kids, don't try that one at home.

The case has been reported in the Journal of Emergency Medicine.