Experiment Shows We Can Actually Generate Electricity From The Night Sky

There's a stark contrast between the freezing temperatures of space and the relatively balmy atmosphere of Earth, and that contrast could help generate electricity, scientists say – utilising the same optoelectronic physics used in solar panels.

The obvious difference this would have compared with solar energy is that it would work during the night time, a potential source of renewable power that could keep on going round the clock and regardless of weather conditions.

Solar panels are basically large-scale photodiodes - devices made out of a semiconducting material that converts the photons (light particles) coming from the Sun into electricity by exciting electrons in a material such as silicon.

In this experiment, the photodiodes work 'backwards': as photons in the form of infrared radiation - also known as heat radiation - leave the system, a small amount of energy is produced. 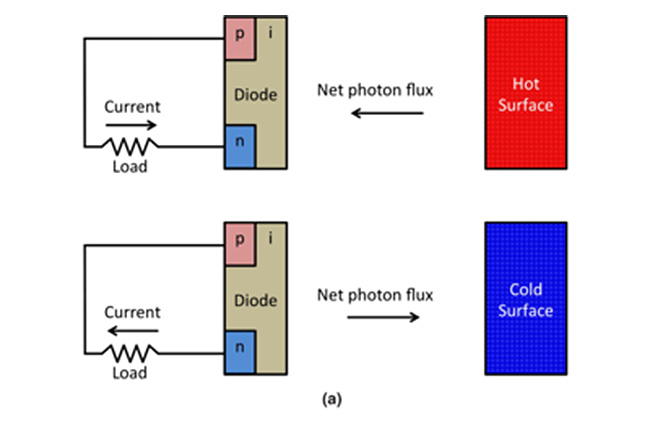 Diagram showing the two directions a current can go in a photodiode. (Santhanam & Fan, Phys. Rev. B, 2016)

This way, the experimental system takes advantage of what researchers call the "negative illumination effect" – that is, the flow of outgoing radiation as heat escapes from Earth back into space. The setup explained in the new study uses an infrared semiconductor facing into the sky to convert this flow into electrical current.

"The vastness of the Universe is a thermodynamic resource," says one of the researchers, Shanhui Fan from Stanford University in California.

"In terms of optoelectronic physics, there is really this very beautiful symmetry between harvesting incoming radiation and harvesting outgoing radiation."

It's an interesting follow-up to a research project Fan participated in last year: a solar panel that can capture sunlight while also allowing excess heat in the form of infrared radiation to escape into space.

In the new study, this "energy harvesting from the sky" process can produce a measurable amount of electricity, the researchers have shown – though for the time being it's a long way from being efficient enough to contribute to our power grids.

In the team's experiments they were able to produce 64 nanowatts per square metre (10.8 square feet) of power – only a trickle, but an amazing proof of concept nevertheless. In theory, the right materials and conditions could produce a million times more than that: 4 watts per square metre.

"The amount of power that we can generate with this experiment, at the moment, is far below what the theoretical limit is," says one of the team, Masashi Ono from Stanford. A schematic of the experimental infrared photodiode setup. (Masashi Ono)

When you consider today's solar panels are able to generate up to 100-200 watts per square metre, this is obviously a long way behind. Even in its earliest form, though, it could be helpful for keeping low-power devices and machines running at night: not every renewable energy device needs to power up a city.

Now that the researchers have proved this can work, the challenge is to improve the performance of the experimental device. If it continues to show promise, the same idea could be applied to capture energy from waste heat given off by machinery.

"Such a demonstration of direct power generation of a diode facing the sky has not been previously reported," explain the researchers in their published paper.

"Our results point to a pathway for energy harvesting during the night time directly using the coldness of outer space."

The research has been published in Applied Physics Letters.