This article was written by Mirzam Abdurrachman from Bandung Institute of Technology, and was originally published on The Conversation.

But science has another explanation.

Volcanoes are channels that transfer underground molten rock called magma from Earth's crust up to Earth's surface. These channels have shapes like cones, shields or calderas. Beneath a volcano lies a magma chamber, a reservoir of a single large body of molten rock.

It is increased magma movement within a volcano that causes an eruption. These movements are triggered by different processes that happen below, inside, and above the magma chamber.

Below the magma chamber

Volcanoes that are located in subduction zones - where Earth's moving plates collide, causing one plate to sink under the other - receive a steady injection of new molten rock into the magma chamber.

Under the magma chamber, the heat of Earth's core partially melts existing rocks into new magma. This fresh molten rock will eventually enter the magma chamber. When the chamber, already filled with a certain volume, cannot contain the new magma, the excess will be ejected through eruptions. 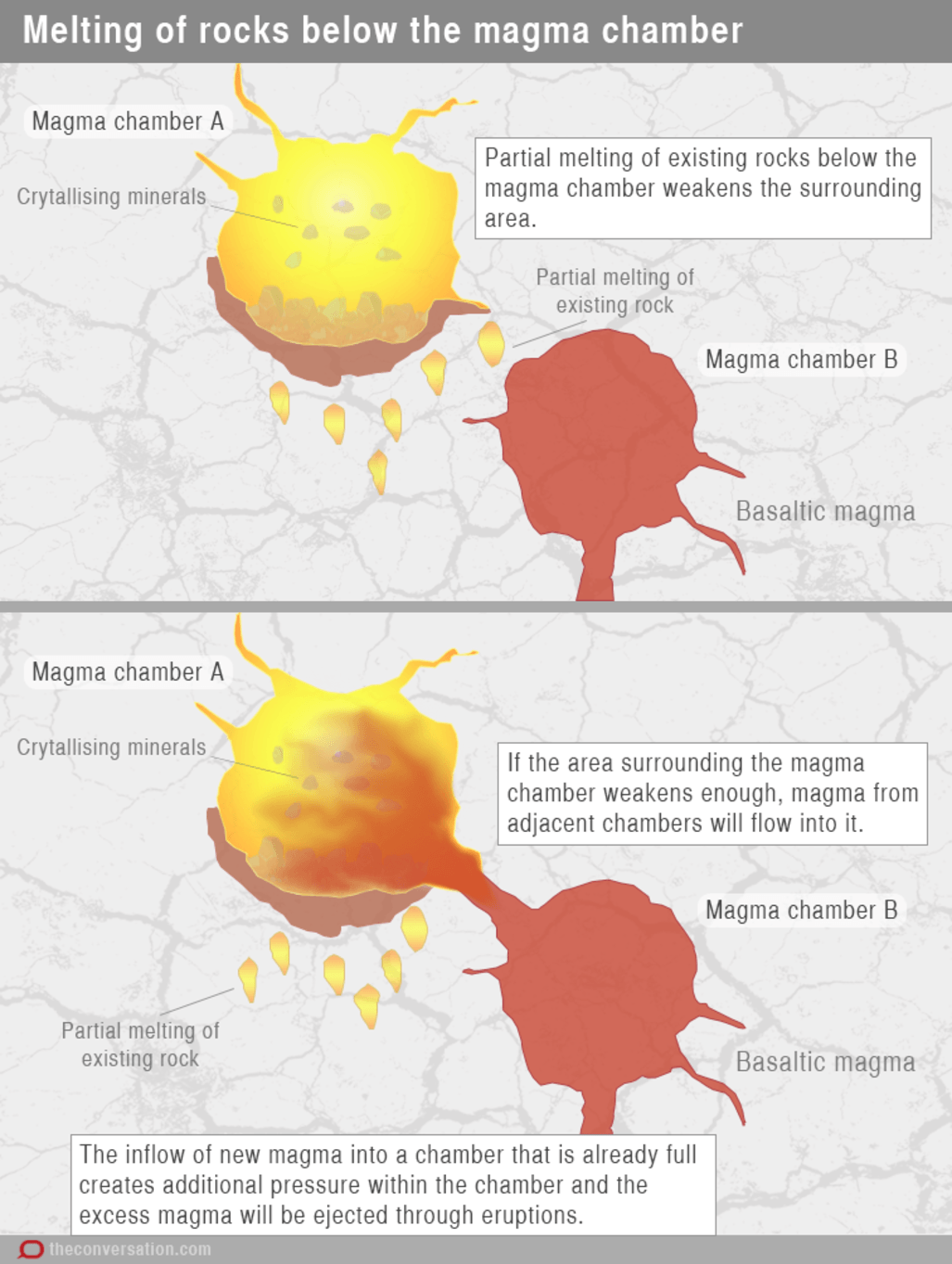 This process usually occurs in cycles, so it's possible to predict eruptions caused by it. West Java's Mount Papandayan, which sits atop the meeting of the Eurasian and Indo-Australian Plates, has a 20 yearly cycle and may next erupt in 2022. It last erupted in 2002.

The time period between eruptions depends on how fast the rock melts, which is influenced by the speed of the sinking plate. The Earth has several subduction zones and the subducting plates generally move at a constant speed of up to 10 cm per year. For Papandayan, the speed of the Indo-Australian Plate that subducts under the Eurasian Plate is around 7 cm per year.

Inside the magma chamber

Activities inside the magma chamber can also cause eruptions. Inside the chamber, magma crystallises due to decreasing temperature. The crystalised magma, which is heavier than the semi-fluid molten rocks, descends to the chamber floor. This pushes the rest of the magma up, adding pressure to the chamber lid. An eruption happens when the lid can no longer hold the pressure. This also happens in cycles and can be predicted.

Another important process inside the magma chamber is when magma mixture mixes with surrounding rocks. This process is called assimilation. When magma moves, it interacts with rocks on the lining of the chamber.

Sometimes, volcanoes have pathways for the magma to flow out to the surface. But if the pathway doesn't exist, then magma will force itself to an area that has less pressure. This can cause the walls surrounding the chamber to collapse.

Imagine dropping a brick into a bucket full of water. The first thing that would happen is water splashing out from the bucket.

The splashing of magma caused by the collapsing chamber wall will cause an eruption. Eruptions from this process are hard to predict.

Above the magma chamber

Eruptions can also happen due to loss of pressure above the magma chamber. This can be caused by various things, such as a decrease in density of rocks above the chamber or the melting of ice atop a volcano. A typhoon that passes a volcano in critical condition can exacerbate the strength of an eruption too.

Rocks that cover the magma chamber can gradually soften due to changes in mineral composition. A decrease in the density of covering rocks eventually makes them unable to hold in pressure from the magma.

What causes this mineralogical change? Sometimes, volcanoes have cracks on the surface that allow water to seep in and interact with magma. When this happens, hydrothermal alterations of rocks occur, resulting in eruptions.

Where the magma exits the volcano is also important. If lava or pyroclastic rocks come out through the side of a volcano, gravity can cause that section of the volcano to collapse, causing a sudden loss of covering pressure. Big eruptions usually happens moments after a sector collapse.

Global warming may cause more eruptions by causing glaciers atop volcanoes to melt. When large volumes of ice on top of volcanoes melt, the pressure above the magma chamber decreases. Magma will ascend to find a new state of balance and cause an eruption.

A study has shown the huge eruption of Eyjafjallajökull in Iceland in 2010 was triggered by this. Iceland is losing an estimated 11 billion tonnes of ice each year, so there might yet be more.

In 1991, Mount Pinatubo in the Philippines had a big eruption when typhoon Yunya struck the volcano and its surroundings. Pinatubo was already rumbling, but the typhoon exacerbated the strength of explosion.

The high speed of the typhoon caused the area around it to lose significant pressure. As a consequence, the air column above the volcano was swept into the typhoon's path. Mount Pinatubo experienced a change of pressure and a big eruption was inevitable.

Mirzam Abdurrachman is a lecturer at the Department of Geology, Faculty of Earth Sciences and Technology at Bandung Institute of Technology.