A rare brine pool in the Gulf of Aqaba. (OceanX)

Rare deep-sea brine pools discovered in the Red Sea may hold clues to environmental upheavals in the region that span millennia, and could even shed light on the origins of life on Earth, a new study finds.

Deep-sea brine pools are extraordinarily salty or "hypersaline" lakes that form on the seafloor.

They are among the most extreme environments on Earth, yet despite their exotic chemistry and complete lack of oxygen, these rare pools teem with life and may offer insights on how life on Earth began – and how life could evolve and thrive on water-rich worlds other than our own.

"Our current understanding is that life originated on Earth in the deep sea, almost certainly in anoxic – without oxygen – conditions," study lead author Sam Purkis, a professor and chair of the Department of Marine Geosciences at the University of Miami, told Live Science.

"Deep-sea brine pools are a great analog for the early Earth and, despite being devoid of oxygen and hypersaline, are teeming with a rich community of so-called 'extremophile' microbes.

"Studying this community hence allows a glimpse into the sort of conditions where life first appeared on our planet, and might guide the search for life on other 'water worlds' in our Solar System and beyond." 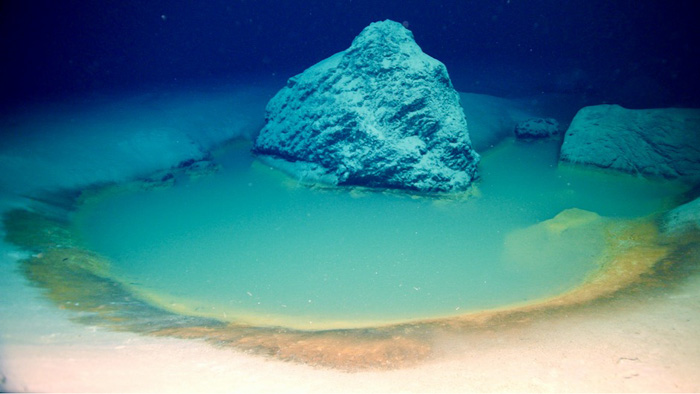 A small brine pool discovered by the OceanX expedition. (OceanX)

These pools might also yield microbial discoveries that could contribute to the development of novel medicines, Purkis added.

"Molecules with antibacterial and anticancer properties have previously been isolated from deep-sea microbes living in brine pools," he said.

Scientists know of just a few dozen deep-sea brine pools in the entire world, which range in size from a few thousand square feet to about a square mile (2.6 square kilometers). Only three bodies of water are known to host deep-sea brine pools: the Gulf of Mexico, the Mediterranean Sea, and the Red Sea.

The Red Sea possesses the highest known number of deep-sea brine pools. These are thought to arise from dissolving pockets of minerals deposited during the Miocene epoch (about 23 million to 5.3 million years ago) when the sea level in the region was lower than it is today.

Until now, all known deep-sea brine pools in the Red Sea were located at least 15.5 miles (25 kilometers) offshore. Now, scientists have discovered the first such pools in the Gulf of Aqaba, a northern pocket of the Red Sea, where the submerged salty lakes lie just 1.25 miles (2 kilometers) from shore.

The researchers discovered the pools during a 2020 expedition onboard the marine exploration organization OceanX's research vessel OceanXplorer. The expedition investigated the Red Sea coastline of Saudi Arabia, "an area which has so far received little attention," Purkis said.

Using a remotely operated underwater vehicle (ROV), the scientists discovered the pools 1.1 miles (1.77 kilometers) beneath the surface of the Red Sea, naming them the NEOM Brine Pools after the Saudi development company that funded the research.

"At this great depth, there is ordinarily not much life on the seabed," Purkis said. "However, the brine pools are a rich oasis of life. Thick carpets of microbes support a diverse suite of animals."

Most interesting among those "were the fish, shrimp, and eels that appear to use the brine to hunt," Purkis said. The brine is devoid of oxygen, so "any animal that strays into the brine is immediately stunned or killed," he explained. The predators that lurk near the brine "feed on the unlucky," he noted.

The proximity of these pools to the coast means they could have accumulated runoff from land, incorporating terrestrial minerals into their chemical makeup.

They could therefore potentially serve as unique archives preserving traces of tsunamis, floods, and earthquakes in the Gulf of Aqaba across thousands of years, Purkis said.

Because the brine lacks oxygen, the pool keeps out the usual animals that live in and on the seabed, such as burrowing shrimp, worms, and mollusks.

"Ordinarily, these animals bioturbate or churn up the seabed, disturbing the sediments that accumulate there," Purkis said. "Not so with the brine pools. Here, any sedimentary layers that settle to the bed of the brine pool remain exquisitely intact."

Core samples that the researchers extracted from the newfound brine pools "represent an unbroken record of past rainfall in the region, stretching back more than 1,000 years, plus records of earthquakes and tsunami," Purkis said.

These findings regarding the risk of tsunamis and other disasters may have "very important lessons for the massive infrastructure projects that are presently being built on the coastline of the Gulf of Aqaba," Purkis said.

"Whereas the coastline of the Gulf of Aqaba has traditionally been sparsely populated, it is now urbanizing at an astounding rate."

In the future, "we aim to work with the other countries that border the Gulf of Aqaba to widen the assessment of earthquake and tsunami risk," Purkis said.

In addition, "we hope to return to the brine pools with more sophisticated coring equipment to try to extend our reconstruction back beyond 1,000 years, deeper into antiquity."

The scientists detailed their findings online 27 June in the journal Communications Earth and Environment.

A giant blue whale just turned up in the Red Sea

Red Sea's glowing corals are a rainbow of colors