Eyeball Planets Might Exist, And They're as Creepy as They Sound

But it's actually not as weird as it sounds - the appearance of these bodies has to do with tidal locking.

Tidal locking is when an orbiting body rotates at the same rate that it orbits. That means it always has one side facing the body it is orbiting, and the other side always facing away. The Moon, for instance, is tidally locked to Earth, that's why we never see its far side from here.

Each bathed in such different conditions, the day side might look very different from the night side. Depending how close the planet is to the star, one side could be dry, all the water burned away by stellar radiation; but the other side, in darkness, could be one huge ice cap wrapping around, terminating in a glacial ring. Something like this: 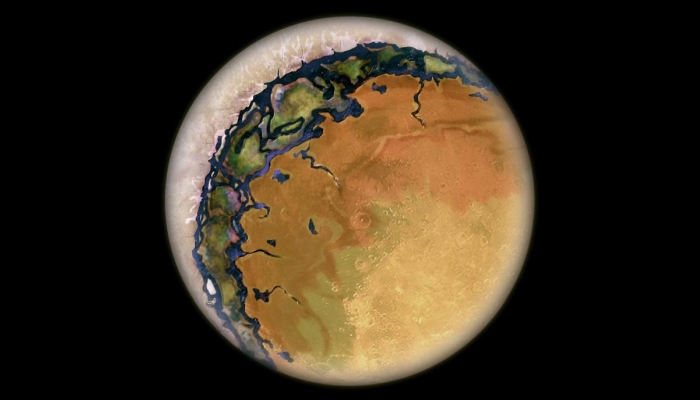 According to a 2013 study in the journal Astrobiology, that ring could be habitable - in perpetual twilight, with water from the melting glaciers enabling a fertile region where vegetation could grow.

That's a hot eyeball. Then, according to astronomer Sean Raymond, there's the icy eyeball, farther from its star's heat. It still has a night-side ice cap. But the star side isn't dry, barren Earth; instead it's a liquid ocean, which again could be habitable, like Earth's teeming seas.

"Hot eyeball and icy eyeball planets are extreme cases, but any planet that is tidally locked to its star is likely to look very different on its day side and its night side," Raymond noted.

"Differences could come from clouds clustered in certain areas, from preferential melting of ice on the day side or freezing of ice on the night side, or from any number of other possible sources. The galaxy may be littered with wild varieties of eyeball planets!"

Well, it's a big place out there, and giant space eyeballs certainly aren't the strangest idea ever. Who knows what could be possible?