Numerous studies show that Japan ranks among the nations with the greatest life expectancy in the world, and while the factors that contribute to longevity are complex, we all know that a healthy diet can play a fundamental role in helping people reach old age.

Now a new study suggests that dietary guidelines introduced by the Japanese government in 2000 might have played a vital role in keeping the Japanese population healthy since then, with those adhering to its advice shown to have a lower risk of death from all causes, including death from cardiovascular disease and particularly stroke.

"Our findings suggest that balanced consumption of energy, grains, vegetables, fruits, meat, fish, eggs, soy products, dairy products, confectionaries, and alcoholic beverages can contribute to longevity by decreasing the risk of death, predominantly from cardiovascular disease, in the Japanese population," researchers from the National Centre for Global Health and Medicine (NCGHM) in Japan write in The BMJ.

Okay, so that shopping list is a bit to take in at a glance, so we've replicated the guidelines with the Japanese government's 'Spinning Top' (which is another way of saying food pyramid) below. The Spinning Top, published in 2005 and based on the 2000 guidelines, was developed by Japan's Ministry of Health, Labour, and Welfare and the Ministry of Agriculture, Forestry, and Fisheries, and stipulates the following. 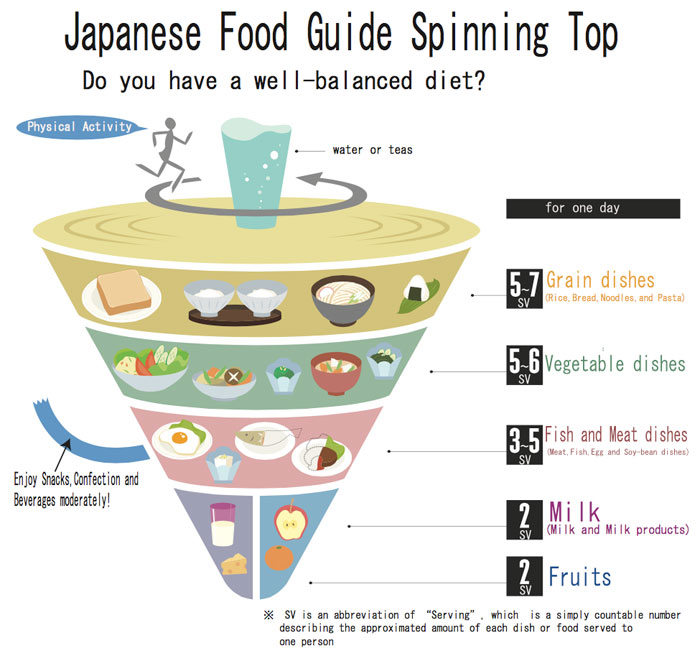 Ministry of Health, Labour, and Welfare & the Ministry of Agriculture, Forestry, and Fisheries

In the course of one day, people should aim to eat:

In this context, each of the serving sizes are pretty small – for vegetables, it's up to around 70 grams per serve. And right at the top, you can see lots of water or tea consumption is advised, in addition to plenty of physical exercise.

In the NCGHM study looking at how effective these recommendations really are, the researchers collected data from food and lifestyle questionnaires completed by 36,624 men and 42,920 women in Japan aged between 45 and 75. None of the participants had any history of cancer, stroke, heart disease, or chronic liver disease, and were followed up with health checks for 15 years.

The researchers found that the men and women who adhered more closely to the guidelines had a 15 percent lower total mortality rate over 15 years. According to the researchers, the protective benefits afforded by the diet were mostly attributable to a lower risk of cerebrovascular disease (commonly meaning stroke).

While it's definitely a large study with a fairly massive cohort, it's important to bear in mind that the researchers only considered Japanese people living in Japan, so we can't just assume that the same diet would have the same effects on people in other countries.

That said, the Spinning Top guidelines are broadly similar to lots of recommended diets in Western countries and elsewhere, so they could be a handy blueprint to keep in the back of your mind when you're considering the kinds of food you should be eating more (and less) of.