An ancient giant crocodile may have once walked on only two legs, its tail held proudly in the air, its feet rolling heel-to-toe, not unlike our own.

That scene is hard to imagine, especially since crocodiles have a misleading reputation for having gone relatively unchanged through millions of years of evolution.

In fact, so ingrained has our concept of a four-legged crocodile become, experts nearly overlooked this ancient bipedal relative completely, while researching fossilised prints at the Jinju Formation in what is now South Korea.

At first, palaeontologists thought the set of fossilised tracks - including nearly a hundred extraordinarily preserved prints - belonged to an ancient flying pterosaur, who might have been giving its wings a quick break on the mudflat.

Upon closer inspection, however, the fossil indentations began to look oddly familiar. In the heel of one print, scientists found a clear impression of scales; that wasn't what they were expecting.

"Dinosaurs and their bird descendants walk on their toes," explains Kyung Soo Kim from Chinju National University of Education in South Korea.

"Crocodiles walk on the flat of their feet leaving clear heel impressions, like humans do."

Still, no matter how hard they looked, they couldn't find one thing: 'hand prints'. While animals can sometimes walk over the prints of their front limbs with their hind limbs - a concept called over-printing - the team found no evidence of that at the site.

"It isn't due to poor preservation either," argues palaeontologist Anthony Romilio from the University of Queensland, "because these fossils are spectacular, they even have the fine details of the toe-pads and scales on their soles preserved."

Carefully analysing these impressions, it became clear that while the creatures had been moving on two legs in the same way many dinosaurs once did, the footprints didn't actually belong to a dinosaur. But modern crocodile locomotion didn't match, either.

"Typical crocodiles walk in a squat stance and create trackways that are wide," explains Kim. "Oddly, our trackways are very narrow looking – more like a crocodile balancing on a tight-rope." 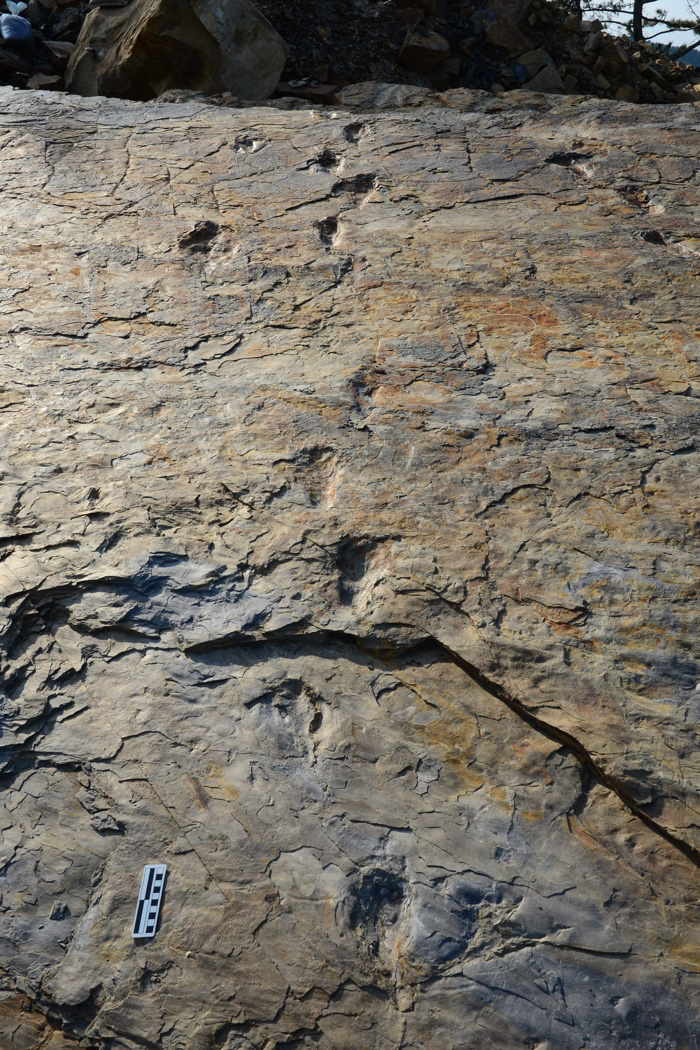 That's an unusual gait, especially for such a big creature. The size of the footprints, roughly 18 to 24 centimetres (7 to 9 inches), indicates this ancient reptile stood up to three metres long (9.8 feet), with legs about the same height as those of an adult human.

As wild as this seems at first, there might actually be precedent for such an amazing feat of balance among other ancient crocodylomorphs - the group that includes modern crocodilians and their extinct relatives.

In Korea during the Jurassic, a variety of the ancient crocodile Batrachopus is known to have had narrow tracks, indicating a semi-terrestrial gait.

Of course, the new tracks are more than twice as large as any previously reported Batrachopus prints, but the authors maintain they closely resemble this ancient crocodile relative.

The team has now assigned the footprints to a potentially new species, Batrachopus grandis; if they're right, no other Batrachopus ichnospecies - a species identified from trace fossils - has been described in such detail. These footprints are the largest Batrachopus sample currently known.

The discovery is unexpected to say the least. Crocodile tracks without hand prints have never been found before in the fossil record; maybe that's because we've been too quick to dismiss the idea of bipedal locomotion among ancient crocodiles.

"While most pterosaurian trackways represent quadrupedal not bipedal progression, multiple [footprint only] trackways from the Haman Formation of Korea have been erroneously attributed to giant bipedal pterosaurs," the authors write.

"This unexpected evidence of apparently bipedal crocodylomorphs obliges us to investigate the alternative possibility that the trackway configurations represent an unusual mode of preservation, rather than bipedal locomotion, and underscores the need for a reexamination of the Batrachopodidae and other relevant, morphologically-similar ichnotaxa."

Except for a few early Mesozoic reports, to date no such bipedal crocodiles have been reported from the Cretaceous. Maybe we've been misinterpreting their footprints.