Octopuses are masters of camouflage, but have you ever heard of an octopus that is so good at disguising itself as another octopus that marine biologists didn't even know it was a separate species?

It doesn't have a scientific name, and it hasn't been fully described yet, but the frilled giant Pacific octopus has been confirmed using genetics.

The existence of a separate species has been suspected since at least 2012, when researchers found DNA evidence of a genetically distinct Enteroctopus in the waters of Prince William Sound in Alaska.

However, the two octopuses they tested were released without being photographed, so there was no visual evidence to confirm.

So researchers Nate Hollenbeck and David Scheel from Alaska Pacific University set out looking for that visual confirmation - for an octopus that was similar to, but nevertheless morphologically different from, Enteroctopus dofleini.

And where better to look than a place that seems irresistible to the cephalopods - shrimp traps, where the giant Pacific octopus is common bycatch in Alaska, climbing in to feast on the trapped shrimp, or simply out of curiosity to investigate some new crannies.

Hollenbeck and Scheel retrieved 21 octopuses this way - a full seven of which could be visually identified as distinct from the giant Pacific octopus. 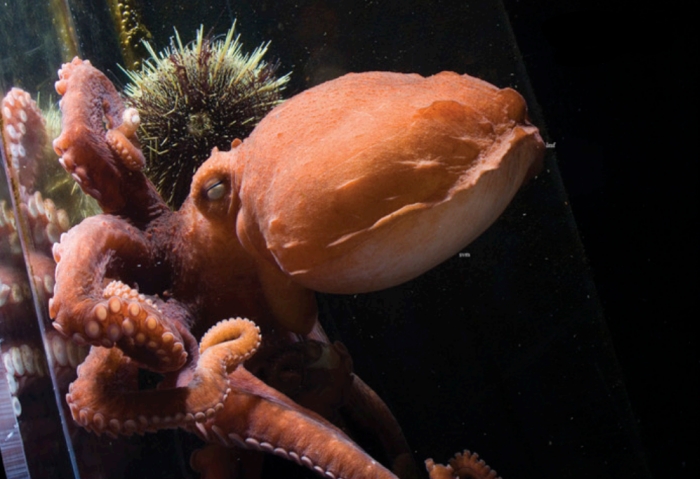 The new octopus was defined by a frill of merged papillae - raised fleshy bumps on its skin - running the length of its body and two white spots on its head, where the great pacific octopus only has one spot.

They all also had one long, thin, major papillae over each eye, a trait that occurs only rarely in the giant Pacific octopus.

All of the new octopuses had at least one of these traits; none of the giant Pacific octopuses did.

Then came the big test: whether the DNA matched the visual differences. And it did - all seven octopuses were genetically distinct from Enteroctopus dofleini, and the researchers identified them as a genetic sister clade using mitochondrial genes, nuclear genes and microsatellite loci.

The two researchers even tested a new technique for DNA sampling, swabbing the skin of the octopus rather than taking a sample from one of the tentacles. This is because skin swabbing is less invasive and harmful to live octopuses. The swab results matched the tissue sample results - demonstrating that the method is viable.

But it's the visual identification cues that will allow field identification of the new octopus, which will help determine its range and population numbers - and the impacts of fishing on the two species.

The octopus is yet to be fully described and named, but the research so far has been published in the journal BioOne.