Tigers Have Just Been Confirmed as 6 Separate Subspecies. Here's Why That's Important

During my time as a zookeeper I had the privilege of working with both Sumatran and Amur tigers. If they did not both have stripes, you would think they were different species altogether.

The Sumatran tiger is the smallest alive today. At around 100 kilograms (220 pounds), it's "only" about the weight of a large adult male human.

It is suited to the warm and wet forests of the Indonesian island of Sumatra, which is reflected in its smaller size and short, dark rusty orange coat which has many thin black stripes to conceal it in dense vegetation from their prey.

The Amur – or Siberian – tiger is much larger, averaging around 170 kilograms (375  pounds), though there are historic reports of males clocking in at 300 kilograms (660 pounds) or more, and is now found mainly one corner of far-eastern Russia.

It has a thicker but relatively pale coat, with sparse dark brown stripes, which enables it to survive in freezing and snowy winters.

Tiger experts have long debated what such differences mean scientifically. Should the biggest of the big cats be divided into various subspecies, or are all tigers simply "tigers"?

It's an issue with serious implications for conservation. About 3,500 or so tigers remain in the wild, in just 7 percent of their former range. And if those tigers are all the same, or if even most of them are the same, then saving individual populations matters slightly less – and tigers can be moved around to assist breeding in the wild.

Traditionally, eight subspecies were considered to exist. They are the two already mentioned, plus the Bengal tiger, found mainly in India, the Indochinese, the South China tiger and then three extinct subspecies: the Bali (extinct in the 1940s) and Javan (1980s), both closely related to surviving tigers on nearby Sumatra, and the Caspian tiger from Central Asia which went extinct in the 1970s. 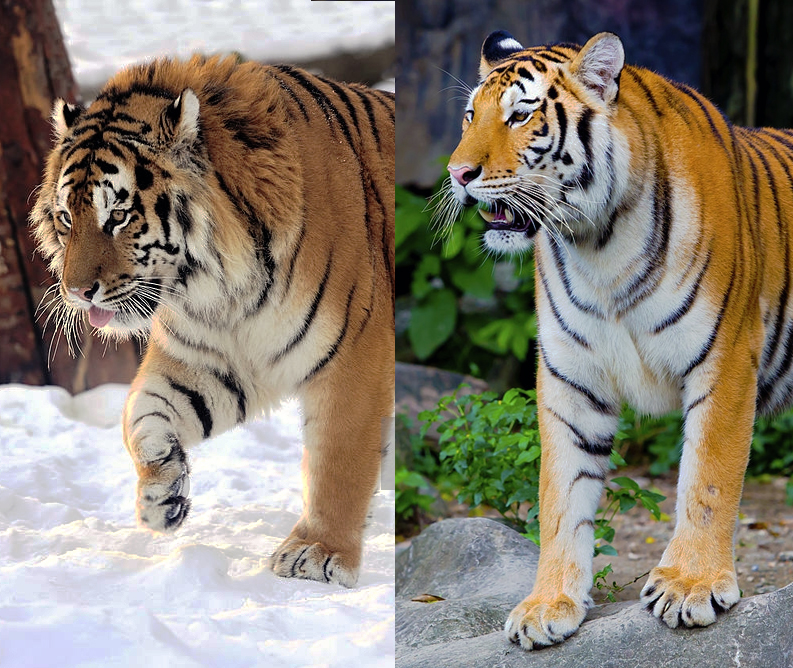 As genetic techniques evolved, a 2004 study found there was little genetic diversity among tigers, but enough to support the separation of subspecies. It also suggested that Indochinese tigers living on the Malayan peninsular were different enough to those living further north to warrant a ninth subspecies: the Malayan tiger.

These ideas were contested by a group of researchers in 2015, who argued that the relative lack of variation among the mainland Asian subspecies and large overlaps in their shape, size and ecology meant that all tigers from India to Siberia or Thailand should be considered the same subspecies.

The researchers called for just two recognised subspecies: the continental tiger, and the Sunda tiger, found on the various Indonesian islands.

However the various subspecies are classified, one of the consistent findings is that tigers follow Bergmann's rule: a principle in zoology which states that animals within the same overall species will tend to be larger in colder environments and vice versa.

The Amur tiger, for instance, benefits from the fact that larger animals are better at retaining heat as they have a smaller surface area relative to their overall mass.

This is where a new study published in the journal Current Biology fits in. Researchers from China and the US looked at the whole genomes of 32 representative tigers and found that there were indeed nine subspecies of tiger – of which six survive today.

But their work also demonstrates that the various adaptations to temperature – Amur big and hairy, Sumatran small and sleek – were triggered by significant prehistoric events that changed global and local temperatures.

The findings confirm previous speculation that the low genetic diversity in tigers was caused by a population decline during an ice age 110,000 years ago.

Thousands of years later, the earliest split from a single common ancestor species occurred between island and mainland subspecies, with the former developing a smaller body size thanks to natural selection.

The super eruption of the Sumatran volcano Toba 75,000 years ago followed by an extreme cooling period was the likely cause. Further splits into more specialised tigers reflect other significant extreme climatic changes.

So why is this important in terms of tiger conservation? As past research has argued, the lack of genetic and morphological differences between mainland tigers could allow them to be managed as single subspecies.

Theoretically individuals from any region, wild or captive, could be relocated to repopulate former areas or increase numbers of failing local populations. This could help to increase general tiger numbers and local genetic diversity.

But the recent study suggests that tiger adaptations may be more subtle and intricate than first appeared.

If tigers are allowed to hybridise either in captive or wild populations it could drive the more vulnerable subspecies to extinction before we fully understand exactly how they have adapted to their particular area.

There is a downside to considering tigers as separate subspecies and attempting to protect them on this basis, without mixing in tigers from elsewhere.

Numbers of each subspecies are very small – there are only around 500 wild Amurs, for instance – and smaller populations are more vulnerable to extinction.

This could be caused by the regular threats of habitat loss and poaching or simply due to reduced genetic diversity making a small population vulnerable to disease and other selective pressures.

Genetic diversity is key for adaptation and ultimately species survival. As our understanding increases, more informed decisions can be made regarding how best to conserve the tiger.

We might not have enough time to solve all the riddles but perhaps this is one step closer to ensuring one of the world's most iconic animals does not disappear forever.