Gemany is turning one of its old coal mines into a giant 'battery station' that will store hydroelectric power and provide energy to around 400,000 homes, with hopes of launching similar facilities across the country in the coming years.

After half a century of service, the Prosper-Haniel hard coal mine in the north-west of the country is due to be shut down in 2018, when the task of getting it converted to a clean energy facility will begin.

Researchers from several German universities are working with private engineering firms and the government on the project, and have been running feasibility studies on the site since 2012. If the project is a success, more mines like this could be adapted.

The 600-metre-deep (1,969-foot) mine provides something the area doesn't have naturally – elevation. That's crucial if you want to create a pumped storage plant like this, with a reservoir on high ground usually feeding another in a valley below.

The flow of water powers turbines and generates electricity, with water pumped back up again during periods of low demand. 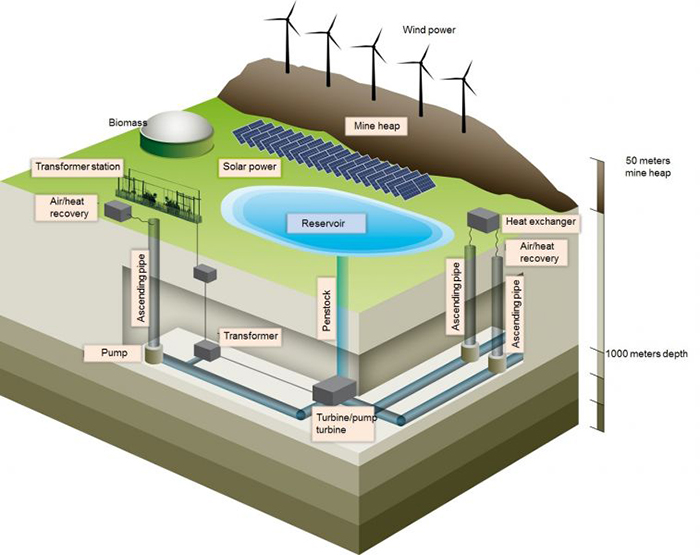 Diagram showing how the mine would work. Credit: University of Duisburg-Essen

"In regions such as the Rhineland or the Ruhr area, the lack of relief in the landscape does not provide the necessary height differences [for hydroelectric power]," explains the project website. "This is where the former coal mines come in."

The transformed 200 megawatt plant would take in energy from wind turbines, solar panels, and biomass sources installed on the surface above the mine.

As for the battery part of the equation, water could be pumped out of the mine during a particularly sunny or windy day, effectively storing the energy as a volume of water in the top reservoir until it was needed.

There are some 26 kilometres (16 miles) of shafts in the complex, with the potential to have a million cubic metres (35 million cubic feet) of water flowing through them, helped by the forces of gravity.

While pumped hydroelectric storage facilities like this typically use up more energy than they generate, they've become important in balancing electricity loads during peak times, when other renewable energy sources – like sunshine and wind – might not be available.

If the Prosper-Haniel plant comes online as planned, it will help the surrounding North-Rhine Westphalia region meet its target of having 30 percent of its energy coming from renewable sources by 2025, reports Brian Parkin for Bloomberg.

Project backers say it will also create new jobs and generate economic activity in a region where people have traditionally relied on fossil fuel production for their livelihood.

One added benefit of converting disused mines is that it doesn't interfere with the natural landscape or require the rerouting of rivers, which is often the case for other types of hydroelectric power plant.

And of course we love the idea of a source of fossil fuels being transformed into something that's so much better for the planet. We can't wait to see the finished product.