Researchers working on the Central Andean Plateau (or Altiplano) in Peru have discovered a giant tree fossil buried in the plains – and the 10 million years of history that it reveals don't quite match up with what we thought we know about the ancient climate.

Back when this tree died, a little more than half way through the Neogene period, the South American climate was much more humid than had previously been thought, based on what this tree fossil reveals.

The researchers say it shows the importance of using plant fossils to work out how our planet's climate has taken sharp turns in the past – and from that, how it might change again in the future. 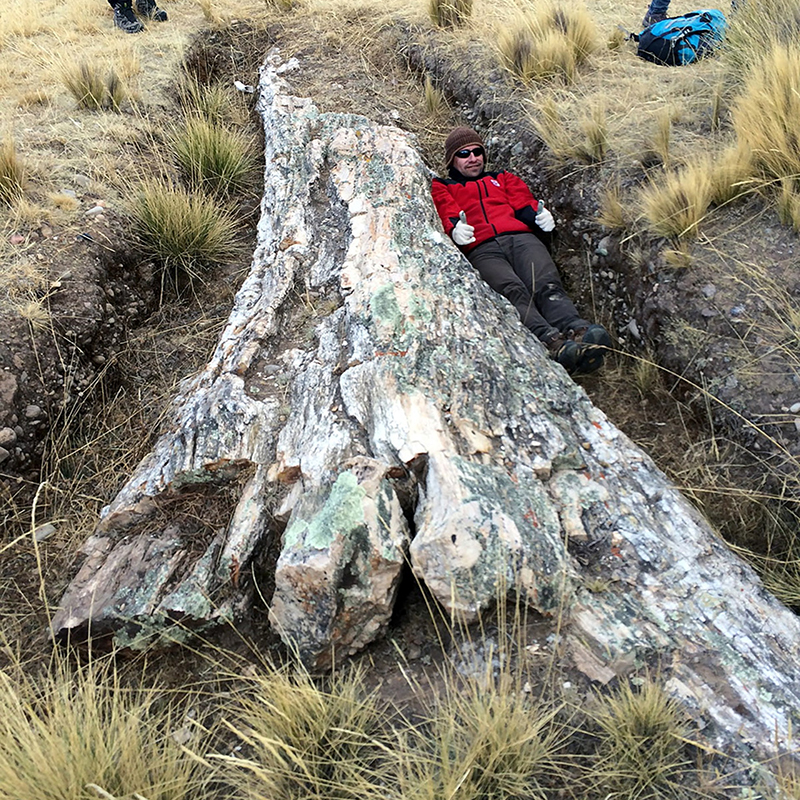 "This tree and the hundreds of fossil wood, leaf, and pollen samples we collected on the expedition, reveal that when these plants were alive the ecosystem was more humid – even more humid than climate models of the past predicted," says palaeobotanist Camila Martinez from the Smithsonian Tropical Research Institute (STRI) in Panama.

"There is probably no comparable modern ecosystem, because temperatures were higher when these fossils were deposited 10 million years ago."

Recovered plant fossils that are a mere 5 million years old suggest the majority of the shift had already taken place by then. They show evidence of grasses, ferns, herbs, and shrubs, suggesting a puna-like ecosystem similar to today's – rather than one that could have supported the growth of huge trees.

In the scale of Earth's history, that's a quick shift in a short space of time, caused by movements in the Earth's lithosphere under South America over many millions of years.

"The fossil record in the region tells us two things: both the altitude and the vegetation changed dramatically over a relatively short period of time, supporting a hypothesis that suggests the tectonic uplift of this region occurred in rapid pulses," says STRI palaeobotanist Carlos Jaramillo.

It's not entirely clear how ongoing climate change is going to affect the Central Andean Plateau and the neighbouring Amazon Basin in the coming years, because of complicated feedback loops that might be triggered. But the new findings suggest that in the ancient past, at least, climate and altitude change occurred alongside one another.

The idea that the tectonic uplift helped to cause less rain and a drying out of the region is almost the opposite of the conclusions that several other studies have come to.

In some ways, though, a lack of agreement between studies can be as useful as perfect harmony – the gaps show where experts might be getting their calculations wrong, and there are a lot of calculations to make to peer back through 10 million years of history.

"By the end of this century, changes in temperature and atmospheric carbon dioxide concentrations will again approximate the conditions 10 million years ago," says Martinez.

"Understanding the discrepancies between climate models and data based on the fossil record help us to elucidate the driving forces controlling the current climate of the Altiplano, and, ultimately, the climate across the South American continent."