A rare freshwater reserve has been discovered underneath the sea off the coast of the South Island of New Zealand, which could help head off future droughts and mitigate the impact of climate change in the coming years.

The offshore freshened groundwater (OFG) was discovered through a combination of seismology and electromagnetic wave scanning techniques, which were used to build up a 3D map of the aquifer under the sea.

While the precise water capacity has yet to be calculated, the researchers think the system could be holding as much as 2,000 cubic kilometres (or nearly 480 cubic miles) of freshwater – that's 800 million Olympic-sized swimming pools, or more than Lake Ontario. 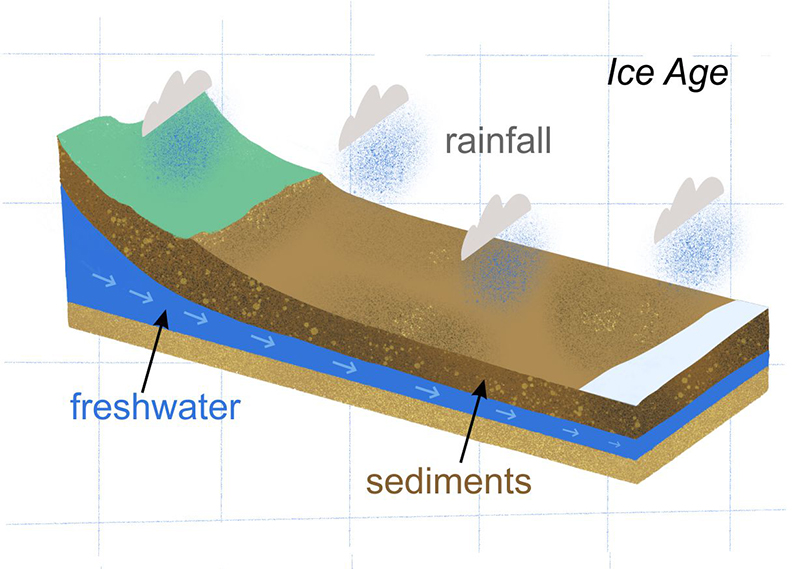 How the freshwater reserve formed. (Marcan)

These offshore aquifers, locked in rock, can be found in various spots around the world, though they're not very common. In this case, much of the water is likely to have been left behind by the last three ice ages, the scientists say.

"One of the most important aspects of this study is the improved understanding it offers to water management," says marine geologist Joshu Mountjoy, from the National Institute for Water and Atmospheric Research (NIWA) in New Zealand.

"At the moment we have used remote techniques, modelling and geophysics. We really need to go out there and ground-truth our findings and we are investigating options for that."

The first hint that such an OFG system was hidden off the port city of Timaru was brackish water (a mix of saltwater and freshwater) discovered after a scientific drilling project in 2012.

Further investigation was started on board a research vessel in 2017. The aquifer is unusually shallow, just 20 metres (less than 66 feet) below the sea floor. It is thought to extend around 60 kilometres (37 miles) away from the coastline.

Its location is particularly fortunate, with the wider Canterbury region facing increased pressure from a growing population and extended dry periods. The vast freshwater reservoir could account for half the groundwater in Canterbury, the researchers say.

While detailed maps of water salinity and aquifer shape have now been drawn up, plenty of unknowns remain. Next, the team wants to actually take samples from the freshwater system and compare them to the models so far.

According to the researchers, the same techniques applied in this study could also be used to re-evaluate similar aquifers across the globe.

Local authorities are keen to explore how the newly discovered aquifer could help with freshwater supplies, without any damage to the surrounding environment or to the ecosystems that depend on it.

"As far as long-term resilience for both our communities and economy, the Timaru district is currently looking at options for long term water security," Timaru mayor Nigel Bowen told Lee Kenny at Stuff.

"Water is our number one priority to get right for our future generations."