A giant otter species the size of a wolf once hunted in China's swamp-like forests more than 6 million years ago, scientists have discovered.

While today's cute and playful otters can do their fair share of terrorising, this extinct predecessor is a whole other story, dwarfing even the largest otters alive now, weighing in at approximately 50 kilograms (110 pounds).

Researchers found evidence of this giant carnivore – called Siamogale melilutra – during an excavation of a site in Yunnan province in China's southwest, discovering a complete skull, jawbone, and teeth.

"While the cranium is incredibly complete, it was flattened during the fossilisation process," says researcher Denise Su from the Cleveland Museum of Natural History.

"The bones were so delicate that we could not physically restore the cranium. Instead, we CT-scanned the specimen and virtually reconstructed it in a computer."

By analysing this reconstruction, the team found that Siamogale melilutra measured about 2 metres long.

Its 50-kilogram bulk would have made it almost twice as large as the biggest otter species alive today – the South American giant otter, which weighs up to around 32 kilograms, and about four times larger than the Eurasian otter.

The extinct species had a large and powerful jaw, with round-cusped bunodont teeth that allowed it to munch on large shellfish and freshwater molluscs in its swamp-like habitat.

The researchers suggest the creature's enlarged frame may have been crucial for the species' survival, because unlike their smaller, modern counterparts, they hadn't evolved the use of stone tools to crack open their meals.

"I think it used its powerful jaws to crush hard clams for food, somewhat like modern sea otters, although the latter use stone tools to smash shells," palaeontologist Xiaoming Wang from the Natural History Museum of Los Angeles County told Reuters.

"If Siamogale melilutra was not smart enough to figure out tools, perhaps the only option left was to develop more powerful jaws by increasing body size." 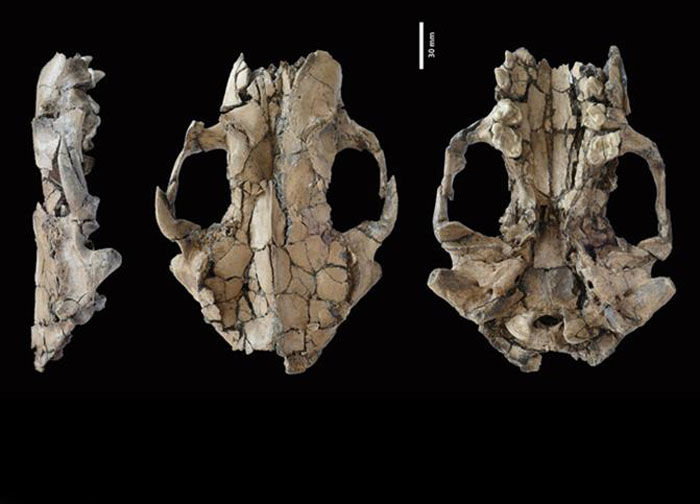 The researchers say the ancient predator belonged to a lineage of extinct otters that date back 18 million years.

The newly discovered skull – dated to 6.2 million years ago – tells us much more about this group, as the only previous fossils identified were isolated teeth found in Thailand, the first of which was discovered in 1983.

The skull reconstruction also reveals that Siamogale melilutra bore similarities to another kind of animal entirely.

"It has the skull of an otter, but shares many dental similarities with badgers," Wang told Brian Switek at Smithsonian, "which is why we called it melilutra" – as meles is Latin for 'badger'.

The researchers are still piecing together just how this ancient predator ended up with such remarkable features, and they intend to keep studying Siamogale melilutra until we have a more complete explanation.

One hypothesis is that the warm, wetland conditions in which the otter lived – an area called Shuitangba – may have acted as a kind of shelter against harsher environmental conditions outside the swamp.

If so, this could help explain how this ancient, wolf-sized, badger-like animal diverged from other otters millions of years ago.

"This is in contrast to what was happening globally, with increased aridification and cooling," Su told Smithsonian.

"Shuitangba may have been an example of refugia habitats that were present during the latest Miocene that allowed some of the mammalian species adapted for a warmer and stable climate to survive into the Pliocene."

We won't know more until further research is carried out, but in the meantime, there's already a lot to marvel at here.

"Siamogale melilutra reminds us, I think, of the diversity of life in the past and how many more questions there are still to answer," Su told Reuters.

"Who would have imagined a wolf-size otter?"

The findings are published in The Journal of Systematic Paleontology.