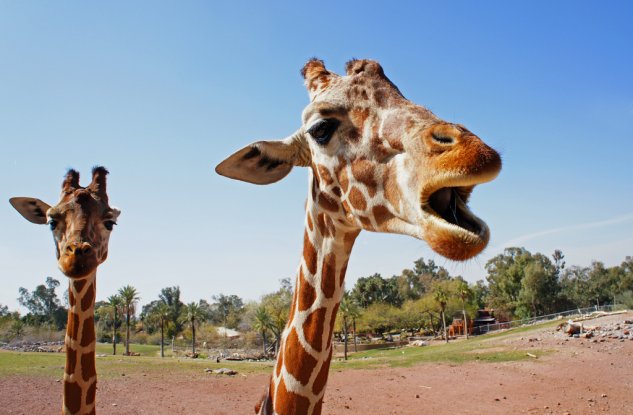 Giraffes Hum to Each Other at Night, Researchers Have Discovered

Scientists have discovered that giraffes can communicate with each other by humming at incredibly low frequencies. And it's the first time a 'sound' has been identified for the relatively silent creatures.

For centuries researchers have tried to work out how giraffes communicate. After all, they live in a socially structured systems, which usually involves some type of vocal communication, but up until now no one had heard any sounds coming from giraffes other than the odd snort or snuffle.

Some scientists have even speculated that, physically, it may be difficult for the ungulates to produce sound because of their long necks, while others believe that they may be communicating infrasonically, which means that the sounds are too low for humans to hear, like elephants are able to do using low rumbles.

But after reviewing nearly 1,000 hours of recordings from three different European zoos, a team from the University of Vienna in Austria has now found that giraffes do communicate vocally in our audible range, they just do it using very low frequency hums during the night.

"I was fascinated, because these signal have a very interesting sound and have a complex acoustic structure," lead researcher Angela Stöger told Karl Gruber from New Scientist.

The hums that were recorded across all three of the giraffe enclosures at night have a frequency of around 92 Hz, which means we can still hear it, but it's very low. The hums also appear to come in varying lengths and with different combinations of notes.

Interestingly, when the researchers played their recordings back to the zookeepers, they'd never heard the sound before.

You can hear their recordings below. Is it just us, or does it sound a lot like yogic chanting?

The researchers still aren't sure whether the giraffes are using this humming to communicate with each other, or if it's just a passive sound, sort of like a snore.

“It could be passively produced - like snoring - or produced during a dream-like state - like humans talking or dogs barking in their sleep," Meredith Bashaw, an animal behaviour expert from Franklin & Marshall College in the US, told New Scientist.  "Alternatively, it could be a way for giraffes to communicate with each other in the dark, when vision is limited, to say, 'hey, I’m here'."

The researchers weren't able to observe giraffes during their humming, so we don't have much to go on just yet. But further research will attempt to nut out the purpose of the sound, and hopefully provide more insight into the social structure of giraffes.

Interestingly, residents in southwest England complained last year that they were being kept up by a humming noise coming from the giraffe house at night.

The nearby Paignton Zoo has denied that giraffes could have been involved, even given the new findings, and Stöger agrees that the hums aren't intensive enough to be heard from neighbouring properties.

"But the image of our giraffes humming happily to themselves all night is a delightful one!" said press and public relations officer of Paignton Zoo. We couldn't agree more.

The research has been published in BMC Research Notes.