Googling Your Symptoms Might Not Be a Horrible Idea After All

We've all done it. Maybe you have a weird rash, or a cough that just won't go away, so you turn to Google to look up your symptoms.

Despite the cliche that search results will just tell you you've got cancer, a large new study out of the US has shown that looking up your symptoms may not be as harmful as doctors have thought.

Not only were the study participants slightly better than expected at reaching an accurate diagnosis, but doing a symptom search also didn't increase their anxiety levels.

"I have patients all the time, where the only reason they come into my office is because they Googled something and the Internet said they have cancer," said first author and physician David Levine from the Brigham and Women's Hospital in Boston.

But as all good scientists would tell you, anecdotes aren't science, so he and colleagues set out to investigate symptom searches a little further.

They found 5,000 US participants via an online recruiting service and asked them to review and diagnose a simple case study, rate their anxiety over the diagnosis, and suggest a triage option (from letting it heal by itself to going straight to the hospital).

"Next, participants were asked to use the internet to search for information about the case and relay their updated diagnosis, triage, and anxiety," the team writes in the paper.

"This study design emulated how a person typically interacts with the internet: encountering information, forming a preliminary conclusion, and then reforming a conclusion after searching the internet."

The team also recruited 21 primary care physicians at Harvard Medical School to check that the researchers got the cases correct.

The average time the participants searched the internet looking for information was around 12 minutes, and some participants did change their diagnosis and triage level after searching.

As you can see below though, they didn't always get it right - diagnosis accuracy before and after the internet search was at 49.8 percent and 54 percent, respectively. 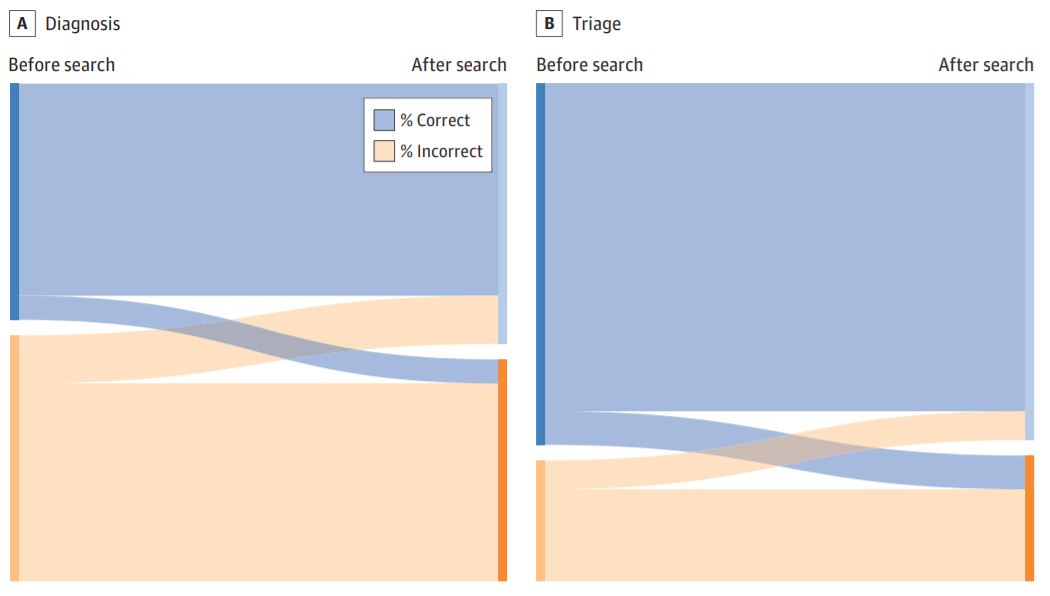 However, the vast majority of the participants stuck to their guns even after searching the internet – around 85 percent for both triage and diagnosis. That left around 15 percent in either category that changed their mind.

So, while laypeople are not expert diagnosticians (with or without internet help), the resulting picture certainly wasn't as bad as the team assumed it would be. In fact, the participants' anxiety about the result stayed exactly the same after googling, and the confidence in their own responses was the same, too.

"Participants reported that, in general, it was slightly difficult to find useful information on the internet and they moderately trusted the information found," the team writes.

"They noted that the most helpful sources of information were search engines, followed by health specialty sites. A small proportion of respondents rated social network sites as most helpful."

There are a couple of limitations here – for example, the participants were asked to pretend a loved one had the symptoms; their anxiety might have been higher if they were experiencing the symptoms themselves.

Also, the results relied on there being a 'correct' answer, and in medicine this isn't always the case. The 21 primary care physicians mostly agreed with each other and the researchers when it came to diagnosis, but not entirely.

"The physicians were not entirely in agreement with our choices. However, we selected multiple experienced physicians, and the accuracy rates among the physicians were more than 90 percent for all of the vignettes," the team adds.

So, although this probably won't be the final word on the matter, it might not be such a bad thing to Google your symptoms – as long as you keep in mind that you could be wrong either way.

The research has been published in JAMA Network Open.